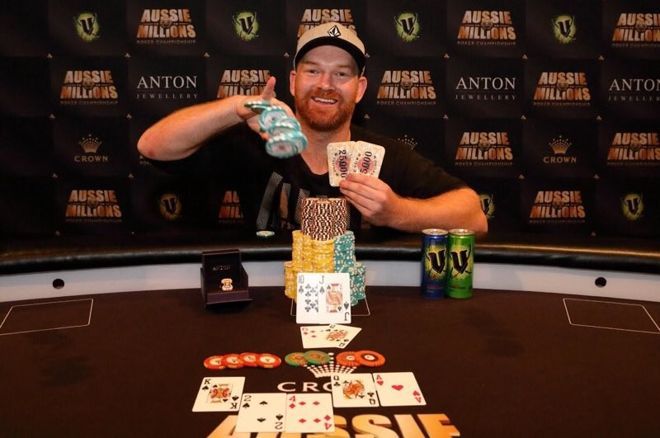 Hockin made two final tables in 2018, finishing ninth in the Shot Clock Shootout for A$4,920, followed by a fifth place in the Six Max for A$26,975. This isn't the first time Hockin has tasted victory here in Melbourne; he won the ANZPT Main Event here back in 2012 for over A$100,000 but this is his first Aussie Millions ANTON Championship ring.

Heads-up, he beat Dylan Kii, who had toppled the start-of-day chip leader and was setting the pace during the early stages of the day. After a deal, Kii takes home A$55,070 in prize money.

Christine Hia came into the day as the overwhelming chip leader with more than twice her nearest challenger's chips, but after two big hands against Dylan Kii, she was out!

The first hand was a case of having too many outs with flush and straight draws against Kii's top two. Then, Kii potted pre-flop, Hia re-potted and Kii then re-potted. Hia called and shoved her flopped straight into the suited aces of Kii who turned a flush to send Hia to the rail in ninth for A$7,085.

As a result Peter Brasile, who started the day as the clear short stack with nine big blinds, managed to jump up a pay jump before also busting at the hands of Kii. He takes home A$8,855.

With seven players left, it was now Kii with the clear chip advantage, over one million in chips compared to Michael Hahn who was second in chips at the first break.

Michael Seymour was another player with a good record in this tournament, and after coming into the day second-shortest in chips, he battled to finish fifth for A$17,270 two years after he finished third in this event. This is his fourth Aussie Millions cash in four years.

Kii still led with four players left, but would have to be wary of Johan Dalessandri who was yet another player at this final table who had tasted a deep run in this event before. Sadly for Dalessandri, he would be eliminated next and now has a third, fourth and fifth place in the Pot Limit Omaha event at the Aussie Millions.

For a player that predominantly plays in the United States, Michael Hahn seems to have gotten the knack of playing poker here in Australia. After a 21st-place finish in last year's Main Event, he followed that up with a third-place finish here in only his second cash outside of North America. The American adds A$28,870 to his over US$1,000,000 in career earnings.

The final two players had a fairly short heads-up battle - just 30 minutes - during which they made the aforementioned heads-up deal.

Eventually, it was Hockin who denied Kii the victory after the New Zealander went runner-runner to river a straight and secure the A$60,070 payday.

Stay tuned to PokerNews for more coverage of the 2019 Aussie Millions, with live reporting kicking off on Friday with the A$25,000 Challenge.