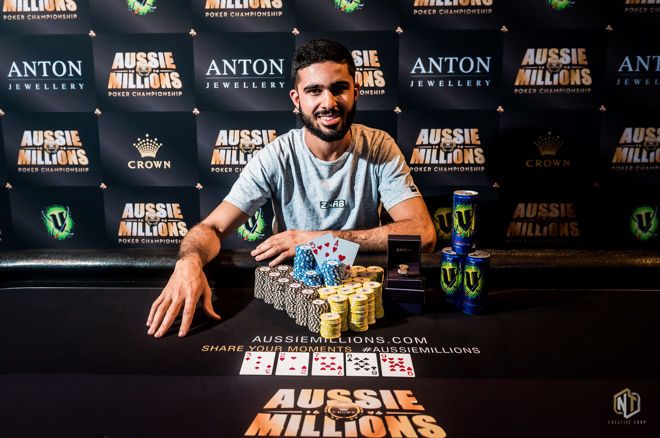 Muhammad Asad has taken down the largest 1k tournament in the Southern Hemisphere for A$219,980 (US$158,385) after a three-way deal at the 2019 Aussie Millions. The event drew a staggering amount of 1,752 total entries.

Coming into the final table with a middling stack, Asad navigated his way to the top and eventually toppled runner-up Jason Prichard.

"It hasn't really sunk in," Asad told PokerNews. "I focused on taking it one hand at a time, so I haven't really thought about it too much.

"when you do get the opportunity to come and play; it's special just being here."

Asad, who is from Sydney, said that he doesn't play too regularly anymore, preferring to play in "bigger, well-organized tournaments" such as the Aussie Millions.

"Today I was really calm," he continued. "I felt more confident going into today than yesterday. I knew that if I got through Day 2, I'd have a good chance on Day 2. I just played my game and stayed confident. There were some times where I ran really good. You need to run good, and it all worked out!"

Runner-up Pritchard eliminated four of the players at the final table and locked up the lion's share of the payouts after the deal, only to finish as runner-up.

Play resumed on the final day with 15 players remaining. Chip leader at the start of the day Artur Koren was one of the first eliminations, exiting in twelfth place for A$17,419 after shoving ace-jack suited with nineteen big blinds from the cutoff, only to be called by Didrik Manton with sevens. The pocket pair held and Koren was eliminated.

By the time the final table was reached, Pritchard was the chip leader with around four million in chips. He would extend that lead to close to five million with the elimination of Tou Ta Wei in ninth place for A$26,398.

Justin Bernstein was the longtime chip leader during the latter stages of Day 2 and came into the day second in chips. He was next to go when he was eliminated by Muhammad Asad. Bernstein took home A$6,640 for his efforts.4

"I've been looking forward to this since I won my ticket 2-3 months ago."

"I had a fair idea about the sort of game each player was going to bring," said Asad. "I just had to pick my spots carefully, make no mistakes and give myself the best chance in those spots."

There was a double for Ning Zhang, but it would be in vain as he fell to Pierce McKellar in seventh place for A$8,485, as the latter made a move up the chip counts.

Pritchard still led by the next break, more than a million chips clear of Asad. His chip lead was extended further after he flopped a set of sixes to eliminate Kim Macnaught in sixth place for A$44,535, and finished off McKellar in fifth place for A$62,493.

McKellar held ace-queen and flopped a queen, but unfortunately for him, Pritchard held pocket queens and sent the American to the rail.

Things got even better for Pritchard when he sent Manton to the rail in fourth for $93,920 - his third elimination by him in a row. The remaining three players opted to look at the numbers.

There was much deliberation between the three players with each wanting a different alteration made to the deal. Chip leader Pritchard wanted A$300,000 while Asad wanted A$240,000. But after much deliberation, the players agreed on some revised numbers, leaving A$14,908 aside for the winner along with the ANTON Championship Ring.

"Initially, I didn't really want to do a deal; I was feeling pretty confident," said Asad. "But at the same time it's easy to get coolered, and there goes $70,000. We spoke about it for a while, and it took a long time for us to get a deal done.

"I ended up getting a better offer than was initial on the numbers. And then I decided it was a smart idea to just take it."

"I ended up getting a better offer than was initial on the numbers. And then I decided it was a smart idea to just take it."

Edwards and Asad proceeded to exchange doubles before the players went on a dinner break. When they returned, it was Edwards who was eliminated first at the hands of Asad. Getting it in with king-eight against Asad's pocket deuces, Edwards flopped trip eights. The turn bricked, but Asad rivered a deuce to send Edwards out in third for A$195,000 after the deal.

"Look," he said after his elimination. "I've been looking forward to this since I won my ticket 2-3 months ago. I had it on the fridge, and my wife was sick of me talking about poker, so it got moved to the side of the fridge.

"But as it got nearer and nearer, it got moved back to the front of the fridge again! I'll see you again in a week and a half, and I'll be back up there on the stream with Jason Somerville!"

That elimination pushed Asad in the chip counts as the two remaining players commenced heads-up play. After a short back and forth, Asad got it in with a flush draw against the top pair and open-ended straight draw of Pritchard. The turn bricked, but the river completed Asad's flush draw, and he sealed victory shortly after 10 pm.

"It attracts all the best players from around Australia and around the world," said Asad about the Aussie Millions. "Everyone feels the atmosphere here, with the pictures [of past Main Event champions] on the walls and everything. You definitely feel the history of the game here.

"You don't get that here often as much as you get in Europe. So when you do get the opportunity to come and play; it's special just being here."

Check the PokerNews.com Live Reporting section for more daily highlights of the 2019 Aussie Millions. Traditional live reporting will begin on January 25 with the $25,000 Challenge.