Another Title for Kempe as He Chops Aussie Millions $25K Challenge 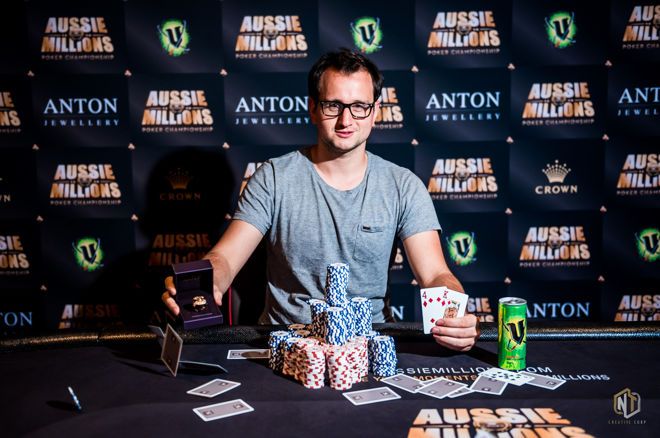 Rainer Kempe has won the 2019 Aussie Millions AU$25,000 Challenge for AU$826,465 after a heads-up deal. Kempe battled to the top of a record 151-player field to clinch victory in the event shortly before 4 a.m. local time.

A little over four years after finishing second to Michael Soyza in the 2015 Accumulator event, Kempe finally has his hands on an Aussie Millions ANTON championship ring of his own.

Here's how the final table finished:

"It's really cool," remarked Kempe shortly after his win. "I was kind of close to winning an Aussie Millions ring in one of my first live deep runs so it's nice to close this one out, so that's awesome.

"I'm going to play the AU$50,000 tomorrow most likely. Then there's the Main Event. My whole family is here having a delayed Christmas so I might be fine with maybe not making a Main Event deep run, but I'll try."

However, the eliminations slowed to a trickle as the money bubble approached, with several players nursing short stacks in the hope of locking up a min-cash worth AU$63,420.

There were doubles for Kempe, Rheem, Sosia Jiang and Jack Sinclair before the bubble eventually burst — in two places.

Najeem Ajez ran top pair into the pair and flush draw of Salter, with the Brit rivering trips while Jack O'Neill shoved with ace-king, only to get called by the pocket kings of Kempe, rejuvenated from his previous double. The pair split the min-cash, each taking home AU$31,710.

With that, the floodgates opened. The first recipient of the full min-cash worth AU$63,240 was Matthew Wantman along with Elliot Smith. Kitty Kuo managed to sneak into the money with only two big blinds and was next to go in 14th place, followed by Sinclair.

Following the O'Neill elimination, it was Kempe who led the final two tables, followed by Gautam Dhingra and Salter.

Jiachen Gong, Jiang and Martijn Gerrits were all eliminated before the dinner break, with Dhingra overtaking Kempe at the top of the counts with nine players remaining.

"For some reason at 10:30 to 11 just after the dinner break a lot of people were tired," Kempe told PokerNews. "They were talking about ending this early."

But play continued, as Japanese duo Hideki Izutsu and Kazuhiko Yotsushika busted in quick succession bringing the tournament to a final table of seven.

Salter came into the final table as the short stack, and failed to run it up, eventually shoving his last 12 big blinds into Luke Marsh who sent his fellow Brit to the rail.

However, Marsh would be on the receiving end of another pivotal pot as Rheem scored a huge double with pocket threes to jump into the chip lead and leave Marsh short. He wouldn't recover and would bust shortly thereafter taking home AU$154,020.

Long-time chip leader Dhingra had been sitting pretty for long periods but suffered a disastrous series of pots, including doubling up Lewis before losing out to Guillaume Nolet. Getting it in with ace-king, Dhingra flopped the nut straight, but his opponent rivered a backdoor flush to eliminate Dhingra in fifth for AU$217,440.

All four remaining players had periods in the chip lead, but it was Nolet who would bust next with Rheem cracking pocket nines with ace-ten to wrestle the chip lead back his way.

"Once it got short-handed it didn't feel like anyone was looking back," Kempe explained afterwards. "They just wanted to win this thing. I felt fairly comfortable the whole way. Clearly three-handed with 50 big blinds a lot of the cards are going to play themselves and I'm just glad I won the big flip against Chino."

And it was a big flip, pocket nines cracked for the second elimination in succession by Kempe's ace-queen.

Play resumed and a hand was dealt, but the hand lay dormant as the numbers were crunched. After the deal was agreed, which saw chip leader Kempe walk away with the majority of the prize pool, the hand that had been dealt was run out and Kempe emerged victorious.

Stay tuned to PokerNews for continued coverage of the 2019 Aussie Millions, with our coverage of both the AU$50,000 Challenge and AU$10,600 Main Event starting tomorrow