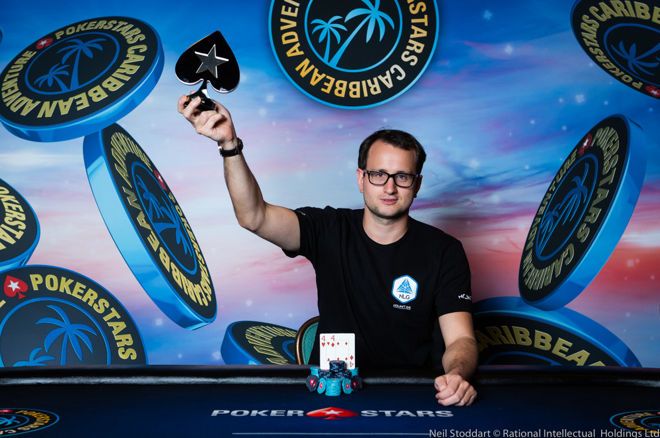 Kempe has now cashed for over $1,000,000 over the past two days which is a great start to the year for the well-known and well-liked German High Stakes regular. Kempe’s cash in this tournament is also his third biggest ever and the biggest ever in a PokerStars event.

The tournament, with an unlimited reentry possibility during the first eight levels, attracted 64 entries which included 29 reentries creating a total prize pool of $3,104,640. Nine players would be in the money for a minimum score of $90,040. The star-studded final table also included Stephen Chidwick, Daniel Dvoress, Christoph Vogelsang, Evan Mathis, Steffen Sontheimer, Bill Perkins, and Jason Koon.

The day started with many familiar faces taking their seats, players like Dominik Nitsche, Joe McKeehen, Timothy Adams, Isaac Haxton, Jean-Noel Thorel, and Nick Petrangelo all jumped in during the first level. Players kept registering and by the time the first break came around, 36 players were already signed up.

David Peters was back in action after a late finish in the $25,000 Single-Day High Roller and was eliminated on his first bullet by Ivan Luca when he ran his king-eight, after having flopped top pair, into the pocket rockets of Luca. Peters did better on his second bullet when he took out Benjamin Pollak with only three tables left in the field. But Peters was next to go when he was sent to the rail by Adrian Mateos who had flopped a flush.

The eliminations and double-ups kept coming and going. Steve O’Dwyer, Andras Nemeth, Adams, Christopher Kruk, Nitsche, and Thorel all busted before the final two tables were reached. All sixteen players would go into the dinner break with some of them knowing that something good needed to happen when they returned as they were short.

Sontheimer found a double through Foxen, leaving Foxen behind with just under eleven big blinds. Mikita Badziakouski fell to Kempe. Foxen then went on a whirlwind of a ride; he first doubled through Sontheimer, then through Dvoress, and later on, he busted Luca. Chidwick took out Michael Soyza, and Henrik Hecklen busted Chris Hunichen. Chidwick halted Hecklen, and hand-for-hand play would commence with eleven players left.

The final table started with three players with fewer than ten big blinds and Vogelsang and Foxen with around half of all the chips in play. The all-ins and calls kept flying around with Mathis, Sontheimer, and Dvoress all doubling in the first thirty minutes of the final table. Koon would be the first to go when he shoved with aces on the eight-trey-ten flop and was called by Vogelsang who held pocket jacks. The jack on the turn dealt Koon a huge blow which he couldn’t recover from.

Perkins packed his bags next when his queen-nine couldn’t beat Foxen’s ace-nine. Sontheimer stepped out with ace-seven against Foxen’s ace-six as Foxen flopped a pair of sixes. Mathis had two pair with eight-seven on the seven-ace-eight (all clubs) flop, and four-bet shoved against Foxen. Unfortunately for him, Foxen had the flush, and no help came for Mathis on the turn or river.

Vogelsang had lost a big pot to Foxen who seemed unstoppable, then doubled up Dvoress, and was left with under a single big blind. He got it in with ace-jack, but Foxen’s seven-trey managed to find a seven on the flop to take Vogelsang out in fifth place.

Kempe was down to only four big blinds when he found a double through Foxen with pocket eights and through Dvoress with ace-nine. Chidwick doubled shortly after with aces through Foxen before Dvoress was done in by Foxen. Dvoress had pocket sevens, but Foxen managed to flop two pair with king-six.

Chidwick took over the chip lead when he rivered a flush against Foxen, but most of those chips were sent Kempe’s way when the latter doubled up again with pocket eights. Chidwick was sent to the payout desk for his third-place cash when he ran his ace-queen into the ace-seven of Kempe who managed to flop two pair.

Only ten minutes later, the tournament was over when Kempe three-bet-shoved with pocket fours and was called by Foxen with ace-queen. Not much danger on the board and after counting out both of their stacks, Kempe had Foxen covered by 80,000 and could claim the win! Kempe’s rail all congratulated him for his comeback and celebrated quietly with him.

Kempe and Foxen are expected to return to the felt today, Thursday, January 10, to play in the $100,000 PCA Super High Roller and the PokerNews live reporting team will be on hand to bring you all the action throughout the PCA!