PokerStars' Comedy Night at the PCA a Resounding Success 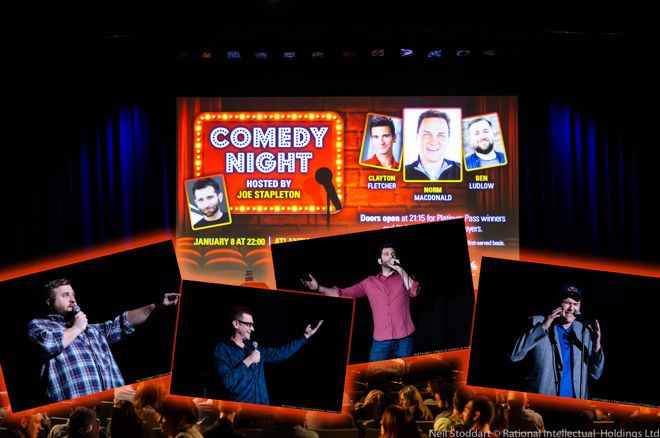 On January 8th, PokerStars hosted a show featuring comedians Ben Ludlow, Clayton Fletcher, Joe Stapleton, and Norm Macdonald for players attending the PCA's PokerStars Players Championship. A free comedy night right here in Atlantis? Sign me up! I've been going to live poker tournaments for well over a decade now for PokerNews, but this was a first for me.

The night started a little later than scheduled, as the PSPC finished later than expected due to a long bubble. But when Stapleton finally did grab the microphone to get things started, the belly laughter was non-stop for about an hour and a half or so.

Stapleton first welcomed Ben Ludlow to the stage. I knew Ludlow was performing, but I was still stunned when I actually saw him walk up. I've known Ludlow for years as he worked with PokerNews as a live reporter first, and more recently started to play a bit more live events. I had no idea he did comedy, but he killed it.

The audience knew right away, this was a poker player and he was funny.

Ludlow warmed up the crowd with poker-related jokes, as would be the case for all four comedians. Ludlow got a belly laugh from most of the audience when he started referencing Negreanu and Leatherman's engagement and closed his opening trying to sell pieces for his PCA package. The audience knew right away, this was a poker player and he was funny.

I can only imagine how nervous Ludlow was. Performing for a crowd of 400 is no small feat, especially considering he's been doing comedy for just a couple of months now. To perform alongside Joe Stapleton, Clayton Fletcher, and the legendary Norm Macdonald must have been a thrilling experience.

Ludlow left the poker jokes for what they were soon after, focusing on his everyday life as a weed connoisseur in Las Vegas. He put himself in a vulnerable position referencing his love of Postmates, and got the audience laughing with every punchline. Job well done. He even got a PIOsolver mention in there I think.

Next up was Clayton Fletcher, who again I knew only as a poker player. But that's on me, I later learned, as Fletcher has been doing comedy for quite some time. I just recognized his name from the 2016 and last year's WSOP Main Event, where he went deep (28th for $230,475).

While that limited interaction is not enough for me to judge his poker prowess, the one performance I saw from him last night is enough to judge his comedy chops; damn that guy is funny!

Whether you see him as a comedian playing poker or a poker player doing comedy - it doesn't matter as the only important thing is that he got the crowd in tears.

Joe Stapleton was the night's host, warming up the audience a bit and introducing the comedians, but also did a set himself.

I've been a fan of Stapleton ever since he joined the PokerStars live streaming team. I love poker more than just about anyone, but it can be boring to watch at times. Not when Stapleton joins the booth though, telling jokes and making on-point observations for hours at a time.

I never get tired of his jokes either, even when some of them are on repeat for years now. I still chuckle when he opens with "Hello my babies!," I still laugh when he rattles off who the mathematical favorite is in a spot, and I still very much enjoy it when he turns into his Spanish alter ego on stream. Oh, and I still sing along with the chopped pot song, as I too love chopped pots. I don't really, but I do still like the song.

Whether you see him as a comedian playing poker or a poker player doing comedy - it doesn't matter as the only important thing is that he got the crowd in tears.

I have no idea how the two compare as I've not done either myself, but I imagine doing 8-hour long improv on stream is just as hard as doing a 20-minute or so prepared set. Where you can get away with not being funny every single second on stream, you have to be on point constantly when the audience sits there doing nothing but staring at you.

After sustaining one drunk heckler who thought it appropriate to yell "You suck" a few times and was asked to leave eventually, the audience was ready for the headliner: Norm Macdonald.

As most will know, Macdonald has a distinct style of comedy. I've been to comedy shows more than once, but no one really compares. I guess no other comedian has mastered his style that some might describe as mumbling. But his timing is supreme; his silences are as thrilling and fun as his punchlines.

Macdonald took his time; I don't know how long he was on stage but it seemed like hours. In a good way; I didn't want it to stop.

Macdonald, while definitely not as versed in the world of poker as Fletcher, Ludlow, and Stapleton, does know more than enough about the game to entertain a crowd full of poker players. He started off his set with a reference on how he thought the term Royal Flush was out of place. In a minutes-long joke about the king and queen and their son Jack, and the outliers ace and the number ten, the crowd couldn't stop laughing.

The joke was exemplary of Macdonald's style. Other comedians in front of other audiences would've probably seen the joke fail miserably, but with a crowd of poker players, it hit the nail right on the head.

He skipped the easy jokes and, in his signature minimalistic style with a monotone voice and lack of any bombastic hand movements, he had the crowd in tears. If I would read you the exact same lines, you would have thought I was a simple one, but Macdonald delivered it in such fashion the crowd erupted.

Well after midnight, I left the Theater at the Atlantis with a big smile on my face, just like the other 400 or so players in attendance. I can only hope PokerStars decides to give this premier show a follow-up as I and the rest of the crowd are up for another edition. Can we have one in Barcelona? Please?