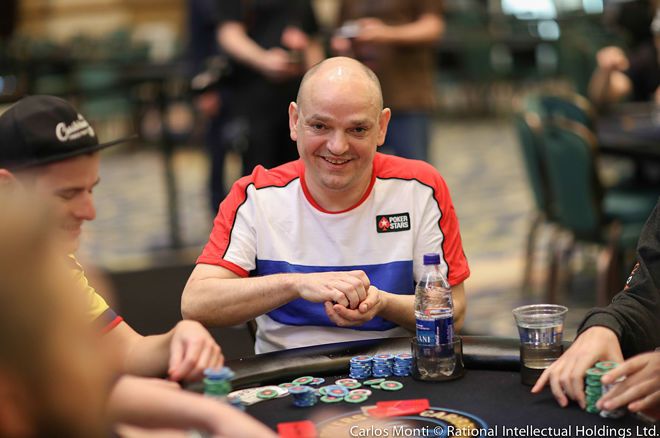 Platinum Pass winner Michael Robionek has never played in a $25,000 event. In fact, he’s never put any money into poker as he built his poker bankroll through cashing in freerolls and plays only with the money he’s made in the game.

You won’t find Robionek on Hendon Mob as he has no live cashes. Online, he has total poker earnings of around $1,000 with his biggest cash worth $85, which came eight years ago for taking second in a $1 tournament. Now down to the final three tables in the $25K PSPC on Day 4, the German fútbol event organizer from Gelsenkirchen is already guaranteed a six-figure payday.

The PSPC High Roller he’s been playing for the past four days is quite a departure from the online freerolls and €3.50 10-person sit ‘n’ go’s online that Robionek typically plays, but he’s holding his own, enjoying his front-row seat of some top poker players.

“It’s wonderful,” he told PokerNews at the first break on Day 4 after he had been moved to the feature table. “I’ve played with such marvelous poker players; I’ve seen so many of them on TV and I’ve learned a lot – hopefully."

"The people are so smart, the players give me so much support, even if I get their chips."

He's making the most of his time mixing it up with the pros and is extremely pleased with how well they've treated him.

“I love the community. The people are so smart, the players give me so much support, even if I get their chips," Robionek laughed. "It’s really great.”

In particular, Robionek enjoyed sitting with Ryan Olisar on Day 2.

“It was so amazing to watch how he plays, how he acts – he was very good.”

To win the Human Lie Detector competition ran by PokerStars Team Pro Daniel Negreanu, Robionek had to detect which of three statements made by various PokerStars Team Pros was a bluff. Upon tweeting the correct answer, Robionek received entry into a freeroll that took place on PokerStars on Nov. 11.

A freeroll specialist, Robionek battled through the field and came out on top, winning a prize much bigger than what he’s used to from his usual run-of-the-mill freeroll. The $30K Platinum Pass package to go to the Bahamas and play a high roller with the pros was more than he could have ever imagined, and he had some work to do to get ready.

To prepare for the biggest tournament of his life, Robionek took advantage of the Facebook Live training sessions that PokerStars offered to Platinum Pass winners, and there he tried to soak up all the poker knowledge he could from top pros like Negreanu, Liv Boeree, Igor Kurganov, and others.

Slow Roll on the Bubble?

It wasn’t part of Robionek’s strategy to get pocket aces on the bubble with one of the smaller stacks in the room, but as fate would have it, he picked up the rockets with the money bubble looming and he had to make a decision. For a player who entered the tournament for zero dollars and whose biggest tournament cash is under $100, calling nearly all-in with aces on a $25K bubble wasn’t a no-brainer.

He exercised his right to think it through when he three-bet and got shoved on by the shorter-stacked Franz Ditz, who held pocket kings. Ditz was none-too-pleased to see his fellow German turn over aces after taking some time, but Robionek explained:

“My biggest cash is a little low compared to others and there’s a twenty percent chance not to cash if I lose this hand, so I thought a little. He was sad about me, but I had to do my calculations there.”

Robionek's run came to an end in 21st place for $150,600 - not bad for a micro-stakes player. Getting a piece of the score are some stakeholders who have been sweating his action, including one friend here on his rail who had 10 percent from a swap. Three others also had action, with a one-percent piece for the person who loaned him money for his flight to the Bahamas. With the six-figure cash, Robionek should have no problem paying back the loan.

Follow the rest of the action on our PokerStars Players Championship live reporting.