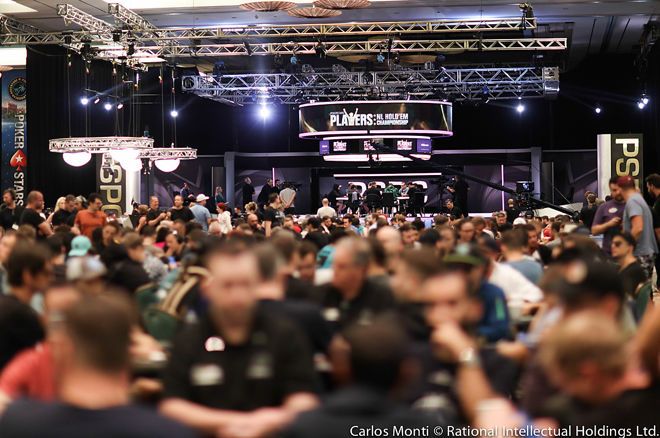 The PokerStars Players No-Limit Hold'em Championship has established a new record for a $25,000 event with 1,014 runners even as registration remains open for another 14 hours or so until the start of Day 2.

That smashed the old mark of 639 set by the 2007 WPT Championship. It wasn't a sweat to beat that number either, as the number was secure from the start of Day 1 and only climbed from there. It seems the $9 million in value added by PokerStars was simply too much to resist for poker players everywhere, as they flocked to Atlantis Resort by the hundreds for this one-of-a-kind event.

With a prize pool pushing north of $25 million, it's safe to say the tournament has surpassed any expectations the PokerStars team harbored.

Talal Shakerchi lapped the field on Day 1 as he turned his 60,000 starting stack into 425,300 when the bagging was done. That's far above nearest competitor Dan O'Brien, who finished with 301,200.

Shakerchi owed his huge stack to a pair of flopped sets that sent him rocketing to the top of the counts starting in Level 6 (300/600/600). He flopped a set of fours and turned a full house, setting Daniel Strelitz all in for 50,000 into a pot of about 40,000. Strelitz called off with only four outs, having flopped second pair, and he missed a river miracle to overcome the boat.

The next level, Shakerchi flopped another set, this time in a three-bet pot with deuces against jacks. All the money went in on the turn again, this time with Shakerchi fading only two outs. After a safe river, he was stacking 260,000 when most of the field was dreaming of reaching the 150,000 mark.

Bags for Some, Beach for Others

Team PokerStars was also well-represented with Leo Fernandez, Chris Moneymaker, Kevin Martin, Lex Veldhuis and Jason Somerville among the 750 or so making it through to Day 2.

Golf legend Sergio Garcia was among the busted, as were Joe McKeehen, Bryn Kenney, Erik Seidel, Steve O'Dwyer and Adrian Mateos. Those players will have to move on and find different tournaments to play as this one is a freezeout.

The PSPC continues Monday with Level 9 (600/1,200/1,200). Play resumes at noon, at which point registration will end, and PokerNews will be on hand for more live coverage, which you can follow here.