Mid-Stakes Grinders Take Their First $25K Shot in the PSPC 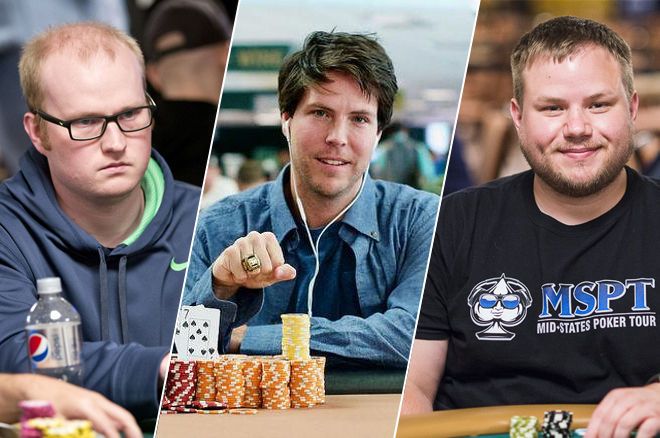 If you're a mid-stakes grinder that will ever play in a $25K tournament, this is probably the one to fire. With the more than one year of hype for the event, any serious poker player on the Circuit was aware of all the added value in the $25,000 PokerStars Players Championship, and most all of them dreamed of taking their seat in the event.

Some of those players secured the freeroll of a lifetime in the form of a Platinum Pass. But among those not as fortunate, many still decided to ship out to the Bahamas and take their shot anyway.

You usually see Chad Holloway on the media side in the poker world, but the PokerNews Associate Editor and MSPT Media Coordinator puts in his fair share of volume on the mid-stakes circuit. We caught up with Holloway as he was getting ready to take his seat in the biggest event he's ever played.

“This one’s definitely special as far as taking a big shot,” he said.

Holloway has a WSOP bracelet from winning the 2013 $500 Media Event for his biggest score of $85K, and has played in the $10K WSOP Main Event, but his usual tournaments are mid-majors with buy-ins ranging from $1,100 to $1,700. Playing in the $25K PSPC being out of the range of possibilities in his mind, an opportunity arose in a conversation with someone who believed in him enough to offer to take a big chunk of his action as an investor.

“That got my wheels turning and I decided to take him up on it. Then I sold a little more action and put up some of my own money."

Being a cornerstone of the poker media world for many years, Holloway is well aware of the significance of the event that playing in suddenly crept into the realm of the possible.

“I'm just taking a shot because it’s a historic event; being rake-free, all the added money, the Platinum Pass winners... If you have the means to play this tournament, you definitely should, and I think the poker world realizes that because they’re out in full force,” he told PokerNews.

For many mid-stakes players, playing an event with a buy-in this big can put on a lot of extra pressure. Holloway did some extra preparation in the form of studying on training sites and reading Alexander Fitzgerald's new book 'Exploitative Play in Live Poker,' but ultimately Holloway just wants to play his game and enjoy the moment.

“My goals are just to take in the whole experience, have fun; it’s a historic moment in poker history and just to play my A-game and leave it all on the table. As long as I do that ,I think I’ll be content, no matter how it goes.”

Another regular on the mid-stakes circuit who decided to take his shot in the PSPC is Maxwell Young of Seaside, Oregon. The five-time Circuit ring winner has amassed over $1.2 million in live earnings, but he normally plays tournaments of $500 to $2,500 buy-ins, with a few $10Ks mixed in.

With some major recent success including winning the $1,700 WSOP Circuit Choctaw Main Event for his biggest score of $263,815, Young jumped on the chance to hop into the biggest $25K in history.

“Things have been going well for me lately in poker and I have a lot of friends and a lot of people in the poker community in the Northwest kind of believe in me. So I sold a little action and I figured why not, let’s give it a shot," Young told PokerNews before things kicked off. "I mean, this is going to be one of the best tournaments of all time. If I didn’t play, I’d definitely have a lot of FOMO.”

Young: "This is going to be one of the best tournaments of all time. If I didn’t play, I’d definitely have a lot of FOMO.”

Fear of missing out can be strong, and you can be sure those players not in the PSPC field are feeling it to some extent. Young couldn't take that chance.

As a full-time player with a busy routine of playing and studying, he didn't veer too much from his normal tournament preparation. When asked about his expectations of the PSPC, Young predicted:

“I think it’s just going to be bigger than anyone thought it was.”

Being a much bigger field than he's used to playing in, Young expects some differences from the $25K.

“I think it’s just going to be bigger than anyone thought it was.”

“I know there are going to be some top-level players in this field, so I’ll have to be aware of that and adjust accordingly. It’s not like I’m not used to playing against them some of the time, but there will be a higher percentage of them in this field. I mean it’ll be soft for a $25K but I don’t expect it to be soft.”

When asked about his goals for the tournament, Young responded:

Another familiar face in the mid-major circuit, Josh Reichard is also playing in his first-ever $25K event. The ten-time ring winner has $1.18 million in earnings to his credit. Like Young, Reichard recently notched his biggest career cash, which was $221,293 for winning the $2,500 HPT East Chicago Main Event last November. His normal buy-in being $1K or smaller, Reichard saw an opportunity in the PSPC.

“All the passes and added value... It seems like if I’m going to step up and play a bigger one like this, this is the one to do it in. And I’ve had some success lately so I can kind of justify it.”

Reichard: "I think you should just treat it the same as any other tournament.”

With a backer who takes all of his action, Reichard didn’t need to sell off any pieces as the event is just a part of his deal. And although it's much bigger than he's ever played, Reichard didn't see a need to do anything differently in terms of preparation.

There is one key difference in this one, and Reichard is aware of what to expect.

“It’s a lot deeper than what I usually play which are Circuits and MSPTs. So I guess that would be the biggest difference in terms of preparation.”

It will also be tougher competition than he's used to, but Reichard welcomes the challenge.

“I think as far as competition level, it’s table-dependent, but in the end, this tournament will be way tougher than what I usually play. I look forward to it though,” he said with a smile.

Reichard just plans to play his best game with the goal of winning.

“That’s always my goal when I play a tournament.”

You can follow these mid-stakes regulars as they attempt to secure new career-high scores - and make history - in the PSPC at the PokerNews Live Updates blog.