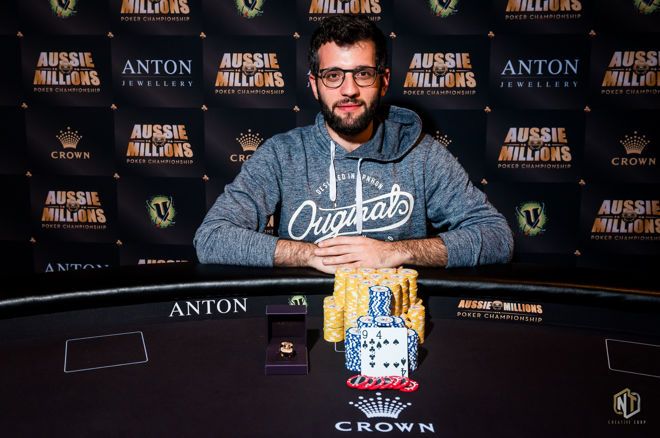 It was a case of first cash, first ring for Ioannis Angelou-Konstas, who took down Event #13: AU$1,150 Terminator for AU$59,695 for his first cash on Aussie soil.

The Greek player, who sits third on his nation's all-time money list, beat a field of 489 players to clinch victory, defeating Australian Michael Fraser heads up.

Here's how the final table finished:

Grant Levy added to his over $2.3M in earnings with a final table finish here in the Terminator, while fellow Australian Tim Sheehan recorded his first cash since winning another bounty tournament in Sydney last December.

Two ladies were next to go; Connie Graham recorded the best Aussie Millions cash of her career and her second of 2019 by finishing seventh for AU$8,600 as Germany's Susanne Kaufer finished sixth for AU$10,915 in her first cash in almost seven years.

India is becoming increasingly represented at the 2019 Aussie Millions, with Jayan Prasad final tabling the Accumulator and now Vinod Megalmani with his first Aussie Millions cash and one of the biggest of his career, finishing fifth for AU$13,485.

Hung-Shen Lin may be one of the few players to have already cashed in two separate events here in Melbourne this year, and after narrowly missing out on the final stages of the Mix Max tournament where he finished 10th, he made it to the final table and took home AU$18,610 for his fourth-place finish.

Gavin O'Rourke had led for most of the final table, but his elimination boosted Angelou-Konstas into a tie for the lead. It's been a busy couple of days for O'Rourke who, after finishing 12th in the Accumulator yesterday, jumped into the Terminator and ran it up to finish third for AU$23,745.

The biggest cash of Fraser's career came in 2017 where he finished second in the WSOPC Sydney Main Event, and he would have to settle for another second place here for AU$37,685 as Angelou-Konstas took down the title, the ring and almost AU$60,000 in prize money.

Keep following PokerNews' ongoing coverage of the 2019 Aussie Millions. The Main Event and the AU$50K Challenge are currently playing out, and you can follow all the updates from this landing page.