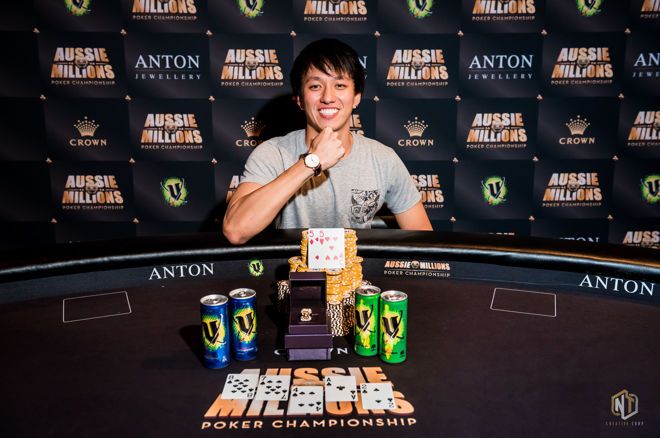 Australian Vincent Huang secured the biggest payday of his poker career so far with victory in Event #8: AU$1,150 Accumulator for AU$139,070 and his second ANTON Championship Ring.

Following a heads-up deal that saw Ireland's Toby Joyce get the bigger share, Huang defeated an 857-player field and battled from a chip deficit to beat Joyce heads-up. With the victory, Huang added another ring to the one he got for his victory in the 2018 Aussie Millions Tournament of Champions.

Coming into the final table as the short-stack, Anthony Marenko was the first elimination. He takes home AU$15,815 in his first Aussie Millions cash since cashing the Main Event back in 2012.

Dutch player Joep Raemaekers added a second cash of this year's Aussie Millions, finishing eighth for AU$18,890 before Australian Martin 'The Doc' Comer added the sixth of his career earning AU$21,965 for his efforts despite coming into the day second in chips.

Luke Martinelli has two second-place finishes in Aussie Millions side events before, but wouldn't another in this one; he finished sixth for AU$27,585.

Start-of-day chip leader Joyce still led five-handed, with Bjorn Ostby the short stack. Ostby would bust next for a payday of AU$35,140.

Indian Jayan Prasad cashed in fourth for the best cash of his career, winning AU$52,710. Prasad cashed in the Opening Event at this year's Aussie Millions and now has a second cash in the southern hemisphere's most prestigious poker series.

Another player who cashed in the Opening Event earlier this festival was Joshua Abady who was next to go, winning AU$70,280 for the best cash of his career. This finish eclipsed a 33rd place in last year's Main Event for which he earned himself AU$35,000.

Heads-up, a deal was done between start-of-day chip leader Joyce and Huang, which saw Joyce take home the lion's share of the prize pool. But eventually it as Huang who took down the tournament, the prize money and the coveted ANTON Championship ring.