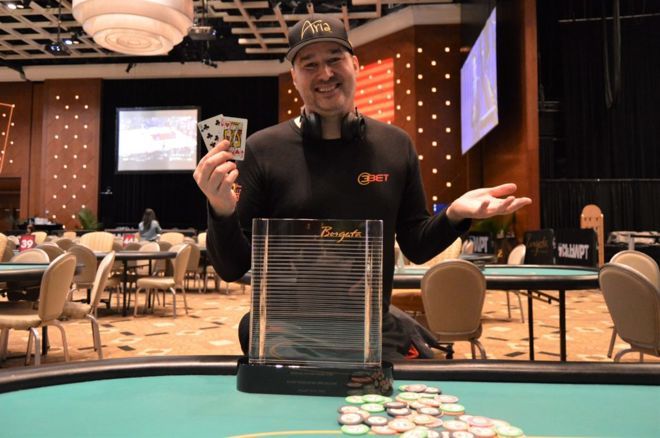 Phil Hellmuth got his first win of 2019 while at the Borgata Winter Poker Open. He was one of 64 players in Event #16: $1,590 Heads-Up NLH alongside the likes of Joe McKeehen, Anthony Zinno, and Anthanasios Polychronopoulos.

However, while all of those superstars fell in the first round, the “Poker Brat” navigated six rounds successfully to win the Borgata trophy and $37,248 first-place prize.

Hellmuth’s path to victory – each step was a best-of-three format – began by defeating Wenhao Ying in the first round followed by Tim Reilly in the second. After that, he bested Travis Greenawaltt in Round 3.

“He handled himself very well and I may have even gotten lucky a few times,” said Hellmuth, who made quite the comeback.

In Round 4, Hellmuth dispatched Steven Sarmiento and then it was on to the finals against Joey Cappello in what turned out to be a three-hour affair.

According to updates from the event, the final hand took place in Level 6 (500/1,000) when Cappello got his last four bigs in holding queen-seven suited and Hellmuth called with king-nine offsuit. Cappello failed to improve and had to settle for second place and $18,624 in prize money.

“The man played amazing and certainly did not give his chips away,” said Hellmuth, fresh off a hair restoration procedure.

As for Cappello, his road wasn’t an easy one. Before losing to the 15-time World Series of Poker bracelet winner, Cappello had beat out the likes of Olivier Busquet, Dylan Gang, Alex Queen, Alex Rocha, and Aleksei Vandyshev.

The 2019 Borgata Winter Poker Open continues this week with the $3,500 World Poker Tour Main Event, which got underway on Sunday.

Images courtesy of the Borgata.