A Sense of Grandeur: A Walk With Phil Hellmuth at the PSPC 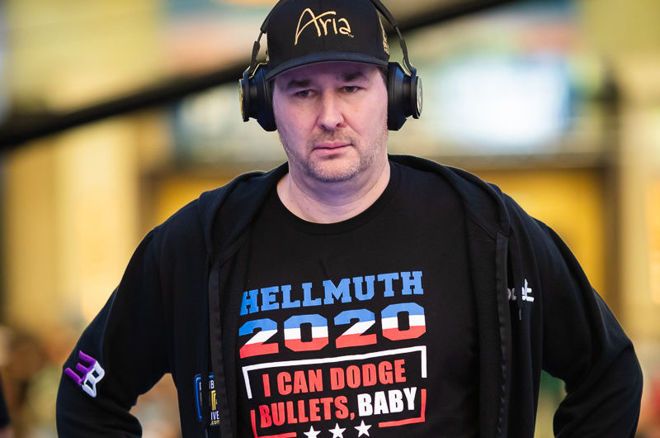 You have the celebrities playing poker here at the PSPC with Tony Hawk, Bruce Buffer, and Norm Macdonald taking their seats. And then you have the poker players who have become celebrities, though people might argue about the A-F list category of their fame.

The names of Phil Ivey, Daniel Negreanu, and Doyle Brunson might ring a bell with some percentage of the US population, and the only other player on that short list is Phil Hellmuth.

Since his first cash in 1987 and his WSOP Main Event win in 1989, Hellmuth has racked up $22,817,318 in tournament cashes with 15 bracelets to show for it. He's no stranger to self-promotion, from making a big entrance at the WSOP dressed up as a general or Caesar himself, to having his face all over beer cans throughout the entire United States. Hellmuth is not afraid to talk himself up either.

Like any proper celebrity, Hellmuth has better things to do than letting his tournament breaks go to waste answering questions from a pesky PokerNews reporter. But, unlike some superstars, Hellmuth is also as gracious as they come, as he asked us to walk with him to his hotel room so he could still give us the answers we were looking for. As a result, during one of the breaks in the PSPC, we walked through the Atlantis Resort in the Bahamas with the impressively tall Hellmuth for some ten minutes or so, talking about the tournament, his book #POSITIVITY, and his legacy.

At the end of our walk after leaving the convention center and taking the elevator to the top floor, we found ourselves standing in Hellmuth's massive hotel room overlooking the impressive holiday resort. Here's the transcript of our walk.

What made you come out for the PSPC? You're not exactly a regular here at the PCA.
I haven't been to the PCA in a long, long time. I was kind of excited about a $25k buy-in that was going to have a huge field.

Also, because I'm doing an event in Jersey City this weekend — I'm doing the National Championship of Sportsbetting — I told myself if I'm gonna make a deal with Draftkings, then I'm going to go to the PCA. If I don't make a deal with Draftkings, I'm gonna stay on the West Coast and play in the WPT at Gardens Casino. So I kind of let fate decide for me.

Normally I'm pretty structured, but I'm also like any other poker player; I make last-minute decisions all the time. That's normal for our industry.

So when Draftkings hired me for the National Championships of Sportsbetting, I decided I was going to follow through and come here. Plus it seemed like an exciting tournament.

What's your first impression of the event. It got over a 1,000 players.
I've never seen anything like it; it's pretty amazing. You have to give PokerStars a lot of credit; it's $5,000,000 for first! It's a beautiful tournament, and it seems to me I'll have to make reservations for the next ten years.

I've been around it before, when a beautiful tournament hits... I'll never forget; in the Rio Casino when they had this tournament in January [the Carnival of Poker poker series that ran 1998-2000] and everybody showed up. Nobody showed up the first few days, and then the fields were huge [later on]. We played tournaments in the Rio every January for a long time, and in that Main Event, I had a second and a third I think. This has a similar feel. We have a $25,000 buy-in with over 1,000 players! It feels like I have to come every year now.

"I've been very lucky financially; I've had some pieces of companies that sold for a lot of money."

I've been very lucky financially; I've had some pieces of companies that sold for a lot of money. Normally I'm working; I'm doing events. I charge $50,000 a day to do events. So normally I'm doing events and raising a lot of money for charity. So with all the events I have, all the television I do, I haven't been able to play enough poker the last five or six years [outside of the WSOP].

I was kind of upset, sitting at home on the couch in October and November looking at all these beautiful events and I missed them all. I was like 'Alright, listen!' I've been scrapping in my mind; I need to make this, I need to make that, really setting aside dates [to make it to certain events.]

Because, at the end of the day, I could be remembered for two things in my life - if I'm remembered at all in 50 years or 100 years. I could be [remembered as] the greatest poker player of all times, or I could be known for starting the positivity movement and motivating millions of people. You know, Tony Robbins is recommending my book at every single place he goes; he's like buy #POSITIVITY. That's strong. He works every day. So that's kind of exciting for me.

How do you look back at 2018?
Well, I won a bracelet, and I came out with my book #POSITIVITY. The book; I think I'm going to sell millions of copies and inspire [millions].

How is it going?
I'm selling like twenty or thirty a day; it's nowhere near where it needs to be. But people tweet me every day, saying 'You changed my life with your book.' Tony Robbins is recommending it in his classes every day. So it feels really special to me to have something that can help.

I've always said I can inspire players, you know. People watch me on television and they're like 'Wow, I'm inspired [because] I can't make that fold, but he did.' I've carried that to the next level.

And then, of course, every year I win a bracelet is a great year. I'm on my 15th bracelet!

"I could be remembered for two things in my life. I could be [remembered as] the greatest poker player of all times, or I could be known for starting the positivity movement and motivating millions of people."

Do the tips work for everyone?
It goes for everybody! Everybody reading your article right now can improve if they just do one thing: write your yearly goals down and tape them to your bathroom mirror. That's a chapter from my book. Just do that and you are going to find your life already improved.

And just that one tip that I've given out on the Tim Ferriss show and I've given out globally, people tweet me all the time with 'I've put this list on my bathroom mirror with my goals, and I achieved my number one, two, and three goal!' I hear that every day; it's pretty cool.

The positivity stuff gives me a chance to be remembered. It's just the truth that I've been able to find. I've spent my whole life looking at strategies and here's a strategy of improving your life.

Thanks again for the praise for my new book #POSITIVITY @TonyRobbins. Honored, as you’ve inspired tens of millions… https://t.co/g0JzDB9t6N

Despite all the positivity, Phil Hellmuth still busted the PSPC on Day 2 of the 5-day event. We expect "The Poker Brat" back in action in the Main Event that gets underway January 11.