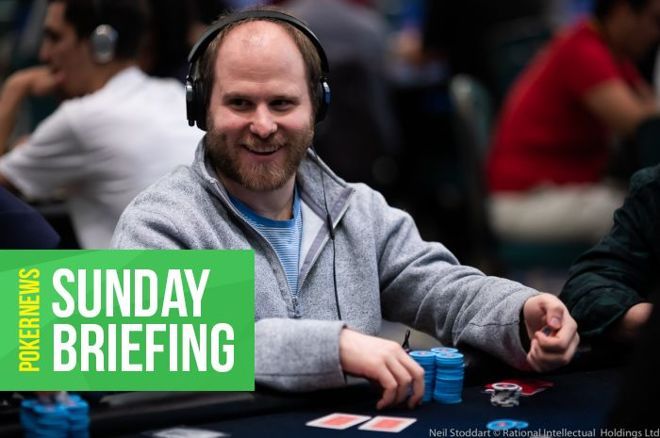 Sunday 31st March was a big day for online poker tournament players thanks to the partypoker POWERFEST commencing, PokerStars changing some of its flagship tournaments to a PKO format, 888poker continuing its Rake or Break events, and Natural8 continuing to host weekly Super High Rollers.

Without further ado, let’s take a look at the biggest tournaments and who triumphed in them.

Sam Greenwood is no stranger to high buy-in tournaments both live and online, so it was unsurprising to see his “DeanMalenko” alias register for the Powerfest #03-SHR: $500K Gtd 8-Max at partypoker, a $5,200 buy-in Super High Roller.

Some 141 players bought in to create a $705,000 prize pool that was shared among the top 20 finishers. The least any of the eight players at the final table took home was a cool $21,150, the sum awarded to Canada’s “TIMEXCNT”.

The first of two British players at the final table, “Equilibrium_x” was the seventh-place finisher, a prize worth $26,649 and they were followed to the sidelines by Team partypoker pro Joao “joaosimaobh” Simao who collected $33,487 for his sixth-place exit.

Jonathan “proudflop” Proudfoot was the next casualty, busting in fifth-place for a $42,300 addition to his bankroll and the British grinder was followed to the exits by UK-based Belgian superstar “omgitsgiraf”; the Belgian padded their bankroll with $59,925.

Now the prize money was starting to become serious with the top two players guaranteed a six-figure score. Austrian pro “mwhldwn” narrowly missed out on that six-figure, falling in third-place for $84,600, which left “wildace10” of Hungary to lock horns with Greenwood for the title.

Greenwood has an exceptional record in Super High Roller events, and he continued his impressive run by sending his Hungarian opponent to the showers in second-place, a finish worth $116,325. This meant Greenwood was the last player standing so was given the title of champion and $162,079 in prize money.

The Powerfest #04-HR: $500K Gtd PKO 8-Max event was a $2,100 buy-in affair that saw 250 players take to the virtual felt of partypoker. With the event being a PKO format, some of the bounty payments were massive, especially that of the eventual champion as they scooped the runner-up’s substantial bounty and the prize on their own head.

Netherlands based Portuguese player Rui “JgsNV” Ferreira was that champion and a worthy one too. First-place netted Ferreira $40,305 from the main prize pool plus an additional $56,023 worth of bounties for a combined prize weighing in at $96,328. Ferreira eliminated Canada’s “pockjack0” in second-place, a finish that was worth $57,411 when bounties were taken into consideration.

All but one of the eight finalists secured a five-figure payout; only Croatia-based Pedro “Maddonaa” Marques missed out, their eighth-place winning them $6,784.

The aggressive styles of fourth-place finisher “Ignent” and fifth-place finisher “smir9david” of Germany have to be applauded as they sent scores of opponents to the rail. Ignent won $21,228 for their fourth-place exit but also $17,316 from the bounty prize pool; only the champion won more. Smir9david also won $10,352 worth of bounties to go with their $14,969 prize money.

This week’s PokerStars Sunday Million had a twist in that it was changed to a progressive knockout tournament, creating a new dynamic for the 10,805 players who entered for $109.

The last player standing in the Knockout Sunday edition of the Sunday Million was Sweden’s “42ayay” who found themselves heads-up against Romania’s “The39player”. No deal was struck between the final two players despite there being a near $35,000 difference between first and second place. This meant when the Swede sent the Romanian to the rail, 42ayay banked a combined $91,471 and The39player had to console themselves with a $56,667 runner-up prize.

Earlier at the final table, “MilonTI” and “dawhiteninja” fell in ninth and eighth-place respectively, the latter becoming the last player in the tournament not to win five-figures. The first $10,000+ score went to “salomon852” of Lebanon who walked away with a $13,513 prize with bounties included.

Belgium’s Michael “Phanteidos1” Ender collected $18,004 for his sixth-place elimination with “KuznevychK” of Ukraine and “Gizmo 1789” of Canada being the next player to fall, padding their bankrolls with scores of $19,825 and $29,663.

The penultimate bust out was that of “StefKolj” of Serbia whose third-place finish won them $35,054.

Once again the $2,100 Sunday High Roller’s final table was a star-studded affair that would not have looked out of place if the buy-in was ten-times the amount; it read like a who’s who of poker tournament players!

Talal “raidalot” Shakerchi ran out of steam in ninth-place to turn his $2,100 into $7,886 before Hungarian superstar Andras “probirs” Nemeth lost his stack and fell in eighth-place for a $10,217 score.

Following Nemeth to the showers was Corey “Corlusion” Kempson ($13,270) before UK-based Spaniard Adrian “Amadi_017” Mateos’ exit in sixth-place, worth $17,236, made the waters a little less shark-infested for the remaining players.

Uruguyan pro “MB TREMENDO” busted in fifth-place for $22,386 and was joined as a spectator by Mexico-based Brit Scott “Aggro Santos” Margereson whose fourth-place exit banked him $29,076.

888poker pro Dominik “Bounatirou” Nitsche locked up $37,765 for his third-place finish. His exit left “elmerixx” of Finland to battle with Joao “IneedMassari” Simao one-on-one for the title. It was a fight that the Finn went on to win, busting Simao in second-place for a $49,050 prize, claiming the $63,707 first-place prize in the process.

888poker continued its Rake or Break tournaments this weekend by putting a $100,000 target on the $530 buy-in Whale. All 176 players received their tournament entry fee back because “only” $88,000 was accumulated in the prize pool.

Second-place finisher Simon “IggyGak” Pedersen and third-place bustee “alwayswin111” were the other two players to lock up five-figure prizes, namely $14,080 and $10,692 respectively.

There were some other well-known players who reached the nine-handed final table, not least Simon “Isildur1337x” Mattsson who crashed out in sixth-place for $4,400, Finland’s “wellyxx” who exited one place later for $5,280 and Mattsson’s fellow Swede “anteen” who was the third-place finisher and turned their $530 into a more respectable $7,920.

It was a good day for Canadian players at 888poker with “ThEtRaIN96” winning the Rake of Break edition of the Sunday Whale and Tim “REALTTWIST” Kelly triumphing in the $100,000 Sunday Mega Deep.

Kelly topped a field of 422-entries to get his hands on $19,350, the lion’s share of the prize pool. Kelly defeated Mexico’s “TonyCipolla9” heads-up for the title, leaving the runner-up to add $14,500 to their lifetime winnings.

Third-place finisher “inkhole” of Austria won $11,000 and was the only other player to turn their $215 investment into a five-figure prize.

This weekend’s Sunday Blade $10K saw 22 players buy in and a $213,400 prize pool created. Only the top three finishers received a prize, due to the compact field size.

Lithuania’s “LaurisL91” was the unfortunate soul to burst the money bubble, busting in fourth-place. Their exit meant “SasukeUchiha” collected $34,449 when the fell in third-place, setting up a heads-up battle between “KenBrynney” and “NONAMES” for the top prize of $111,501.

With more than $44,000 difference between first and second-place, nobody would have been surprised if the heads-up duo struck a deal. But they didn’t, so KenBrynney walked away with $67,449 when they fell in second-place, leaving NONAMES to bank $111,501 and the glory!

After finishing third in the Sunday Blade $10K, SasukeUchiha had to endure being the player who bubbled this $5,000 buy-in event.

The runner-up in the Sunday Blade $10K, KenBrynney, finished sixth in this event for a $10,677 score and was joined on the rail by Natuarl8 regular “ImLividBuddy” of Thailand who scooped $15,896 for their fifth-place finish.

That elimination set up a heads-up battle between “NONAMES” and the United kingdom’s “ST4rGaz3R” and it was the latter who emerged victorious and with the $85,314 first-place prize. NONAMES, who won the Sunday Blade $10K for $111,501 had to make do with the $52,459 runner-up score.