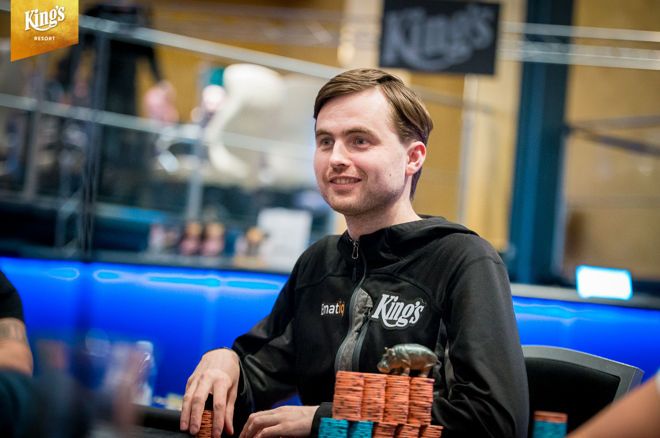 Day 2 of the WSOP International Circuit Rozvadov €1,700 Main Event is in the books after a grueling fifteen levels of play. Over the 2 starting days, 549 entries were collected with 241 players returning at the start of Day 2 for a shot at their share of the €1,103,500 guaranteed prize pool. As registration and re-entries were open for the first two levels of the day, the action was hot and heavy with an additional 101 entries coming in. In the end, the 650 buy-ins weren’t enough to surpass the guarantee.

Twenty-three players will return for the final day on Monday, April 1 at 2 PM local time to battle it out for the first-place prize of €190,000, the additional WSOPE Main Event ticket worth €10,350, and the WSOP Circuit Ring. Taking the overnight chip lead is Daniel Smiljkovic who bagged 2,335,000 in chips. Smiljkovic went up and down the chip counts throughout the day but managed to chip up during the later levels of the day.

Second in the chip counts is Gaga Gotsadze, whose table got moved to the feature stage after the dinner break. The most notable hand was the one where he eliminated both Ladislav Cerveny and Yunsheng Sun when he hit a runner-runner flush. Even though that didn’t add a huge amount to his stack, this was the signal for him to start running over his table. In the end, Gotsadze bagged 2,265,000 in chips. Gotsadze finished in fifth place in the WSOPC Main Event in October and will be trying to improve on that result.

Wissam Turkie is next in the chip counts with 1,955,000 and was also responsible for bursting the bubble when he eliminated Moreno Plozza in a cooler when Plozza had turned the nut-flush, only to find out that Turkie had a straight flush. WSOPC PLO High Roller winner Pierre Christensen will be bringing 20 big blinds to the final day in an attempt to win his second ring within five days. Abdelhakim Zoufri already has a WSOPC Main Event Ring when he won it in Rotterdam in 2017. He has ten big blinds so has some work ahead of him.

Kabrhel already has 4 rings and 2 WSOP bracelets but he probably wouldn’t mind adding another one to his collections. Kabrhel was his usual self all day long, audible from every corner of the biggest poker room in Europe and had a busy day building up his stack, doubling other players up, and eliminating opponents left, right, and center. Some of the eliminated players today who didn’t make it through but did cash include Andrej Imrich, Jaroslav Peter, Emil Bise, Grzegorz Wyraz, Alexandre Viard, Roman Sahin, and Josef Snejberg.

The final day will resume with 23 players in Level 28 which features a small blind of 30,000, big blind of 60,000, and the big blind ante of 60,000. Level duration will be increased to 60 minutes and they will be playing down until a winner has been determined. Everyone is guaranteed to collect at least €7,181 but they will all be aiming for more! Make sure to come back at 2 PM local time to follow the updates from the PokerNews live reporting team to see who will be taking the Main Event down here at the King's Resort.