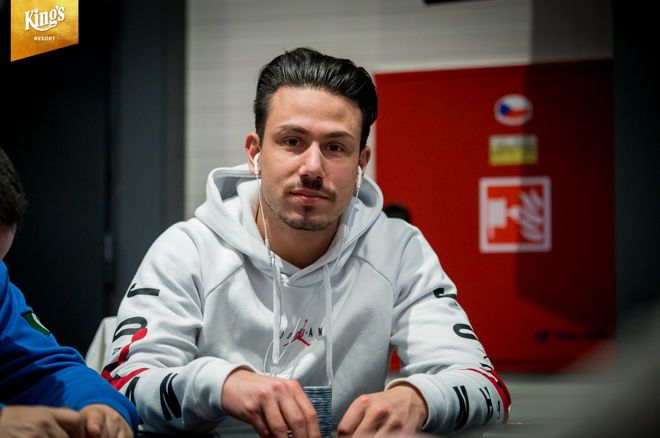 In his own words: Rajkovic was handed a bit of a present at the end of the day when he five-bet shoved preflop and was called by Stanislaw Miadzel who held eight-four suited against the pocket kings of Rajkovic. No danger on the board, so Rajkovic claimed the chip lead during the final hands of the night which was a huge relief for him as he busted in the very last hand of the night on Day 1A with pocket kings too.

Mlcoch was another player who won most of his chips when he doubled up in the last few hands against Roman Mirkus with jack-ten against Mirkus’ ace-king on the trey-eight-jack-ace-ten board when it all went in on the river. Wyraz finished in third place yesterday in the Monster Stack for €18,725 and will be looking for another big result in the Main Event.

Other notable players who managed to tag a bag at the end of the night include Hrair Yapoudjian (256,800) who finished in second place in the GIANT during the 2017 WSOP in Las Vegas. Wojciech Wyrebski (240,400) is another player who finished in a second place, but he did it in the 2018 COLOSSUS in Rozvadov during the WSOPE.

Eyal Bensimhon bagged 179,300 and already has two WSOP Circuit Rings, but he finished in second place here last October in the WSOPC Main Event and will want to do better this time.

The defending champion, Emil Bise put 105,600 chips in his bag which is just below average but still gives him enough space to defend his title.

Not everyone was fortunate enough to make it through but as the late registration and reentry period is open for the first two levels of Day 2, any player who has busted over the past two days or during those two levels on Sunday, can still reenter until approximately 3:50 PM local time on Sunday, March 31.

Who will make it into the money? Follow all the updates from the PokerNews live reporting team as the remaining players will be battling it out here in Rozvadov.