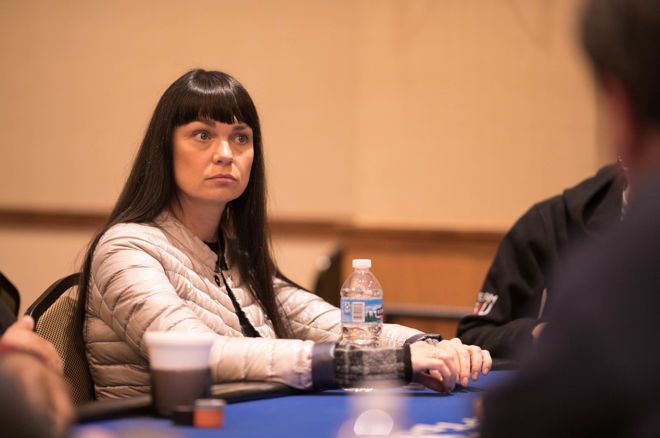 Day 1b of Heartland Poker Tour Ameristar East Chicago $1,650 Main Event wrapped up after 12 hours of play on Friday with another 20 players punching tickets to Monday's Day 2, joining the 16 who advanced from the first starting flight.

Nadya Magnus had a stellar day at the felt, surpassing Day 1a leader Craig Casino by bagging 497,000 to lead the remaining field. Magnus, who gained some measure of poker fame with an appearance on televised cash game "The Big Game," actually peaked even higher than that with north of 500,000 after she crushed an opponent's jacks with pocket kings during the final level of the night.

With over $500K in cashes including numerous scores in $5k+ events, Magnus brings a good deal of experience to the felt and now has a commanding chip stack heading into Day 2, which could prove a tough combination for her opponents to handle.

Mark Morris also threatened Casino's mark before ultimately falling just 1,000 short with 463,000. Jim Kasputis, David To, Chris Moon and Prince Gaspard also advanced, although the latter has the shortest stack with 40,000 so he has plenty of work to do if he doesn't opt to try to bag bigger on a subsequent flight.

Another player making it through was defending HPT Player of the Year Aaron Johnson. He had a slow start but quietly accumulated chips in the middle stages to get around 250,000 before sliding a bit late and finishing with 130,000.

The Minnesota pro did work on the tour in 2018, with four cashes, including one win for $86,189 and a sixth-place finish in the season-ending championship for $37,043.

The 127 entries on the day slightly edged past the 116 of Day 1a to push the total to 243. Shawn Roberts, Michael Hudson, Mike Shin and Ryan Olisar were some of the notables to show up but brick out.

They'll have another chance on Saturday's Day 1c, set for a noon start.

Come back to PokerNews to see what develops on the third starting day of the HPT Main Event.

A Quick Guide to the Best Blackjack Betting Strategy