PokerStars is Testing a New “All In Cash Out” Insurance Feature 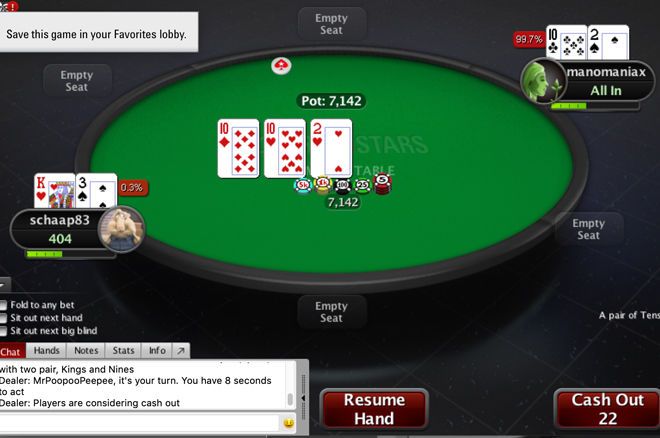 A new feature looks set to come to PokerStars’ cash game offering after the world’s biggest online poker site rolled out the All-In Cash Out feature on its .NET play money site.

This new feature, first noted by PokerFuse, allows cash game players to cash in their equity when they are all in instead of playing out the remainder of the hand. The player chooses the all-in cash-out option and receives their share of the pot based on their equity in the hand, minus an administrative fee of 1% of their equity.

An Example of How All-In Cash Out Works

Imagine you're all in on the flop holding

against an opponent with

. With $100 in the pot, your equity in the hand is roughly 70%. You would now have the option to play the hand out, as usual, leaving the outcome up to PokerStars' RNG, or cash out for your equity.

In this example, you would have the option to take $69.30. This is $70 for your 70% equity, minus 1% of your equity, or $0.70. Should both you and your opponent opt to take the cash-out option, the hand ends immediately. If you choose to resume the hand, but your opponent decides to cash out, the hand plays out as usual except they play the remainder of the hand against PokerStars, with PokerStars keeping the money if they win.

Players will have the option to turn off the All-In Cash Out feature if they wish.

Where Will I Be Able to Use All-In Cash Out?

PokerStars.net currently has some selected six-max No-Limit Hold’em tables offering this new feature. According to rules posted on PokerStars.NET, the All-In Cash Out feature is set to be rolled out across all No-Limit Hold’em Six-Plus Hold’em and Pot-Limit Omaha cash games.

PokerNews believes the All-In Cash Out feature will become available across all of PokerStars’ .COM markets, although it is unlikely it will feature in the immediate future on ring-fenced sites such as New Jersey, France, Spain, and Portugal due to the various licensing laws in these regions.

What is the Difference Between All-In Cash Out and Run It Twice?

PokerStars’ players have long had the option to Run It Twice, that is run multiple boards when a player is all in. The main difference between Run It Twice and All-In Cash Out is both parties have to agree to run it twice, but an individual can choose all-in Cash Out without affecting the outcome for the other player or players in the hand. On the tables where All-In Cash Out is active, Run It Twice is omitted.

Has a Similar Feature Been Available Previously?

The idea is not new, having long existed in the live poker sphere. Other online sites have experimented with a similar option as well.

According to Poker Fuse, a company by the name of InsuredPlay entered the online gaming market in 2012 and offered a third-party service that insured players’ cash game hands against bad beats. It was available for real money cash game play on Full Tilt, the iPoker Network, partypoker, and PokerStars, but it ceased operations 16-months after launch citing undisclosed difficulties.

Your Lucky Hours Are About To Start

How to Win at Slots: How to Pick the Best Slots to Play and Win More

PokerStars Live Gets Ready for the Thriller at APPT Manila