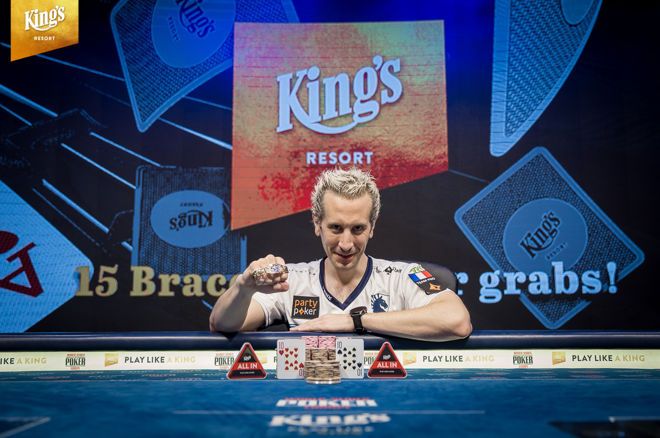 The 2019 World Series of Poker Europe has crowned its final champion of the festival at the King's Resort in Rozvadov as Bertrand "ElkY" Grospellier defeated Avraham Dayan in heads-up to claim the top prize of €190,375 along with his second career bracelet.

ElkY: "I was two cards away from busting in fifth, and now I am first."

Throughout nine starting days, the €550 buy-in event attracted a field of 2,738 entries to create a prize pool of €1,300,550. The vast majority of that was paid out to the 313 players that advanced to Day 2. But only eleven of them returned to their seats on the final day to determine the fifteenth and final WSOP bracelet winner of the third edition of the WSOPE in Rozvadov.

Formerly one of the top-ranked players in StarCraft and WarCraft III, Grospellier has since taken over the top spot on the French all-time money list in poker with more than $14 million in cashes. HE became the second Frenchman to win a second bracelet after Roger Hairabedian.

"It means a lot because it is so hard to get one. The first one I got after five or six years of playing the World Series, but that was eight years ago. It's also special because it comes in such a huge field where it is much harder to win. If there are 2,700 entries in the field, you have to be lucky at some point to win. Of course, you also have to play well, but it is such a rare opportunity. I was two cards away from busting in fifth, and now I am first," a delighted Grospellier said in his interview after the victory.

Unlike some other top pros, Grospellier only entered three times and had one min-cash where he busted in the last hand of the respective Day 1. He secured his spot for Day 2 on the last day. The Frenchman now lives in Prague, and the King's Resort has become his home casino where he takes part in most prominent festivals.

"I am so happy that you won, that really makes my day," King's owner Leon Tsoukernik congratulated Grospellier when all was done and dusted. Grospellier will be attending Tsoukernik's birthday party in Prague in the upcoming days. After that, a trip to Paris for the League of Legends World Final is planned, followed by partypoker's Caribbean Poker Party in the Bahamas.

While he is not actively competing in gaming anymore, Grospellier still follows the scene and was also wearing a Team Liquid shirt during the final table.

The final day also featured Shaun Deeb, who came up short in his bid to become the first player to win back-to-back WSOP Player of the Year titles. Other notables such as Pasquale Braco, Mick Heder, and Marian Kubis claimed five-figure scores but bowed out before the duel for the title got underway.

The big storyline heading into the final day of the festival in Europe's biggest poker arena was the highly-anticipated battle for the 2019 World Series of Poker Player of the Year title. Shaun Deeb entered the final day third in chips, needing at least a fifth-place finish to pull ahead of Daniel Negreanu.

Shaun Deeb: “today was the first day I was a legit favorite, and it fucked with my head,”

“I was a huge underdog throughout the whole series, and today was the first day I was a legit favorite, and it fucked with my head,” Deeb said during his commentary stint on the final table.

He had taken a short break to get fresh air after going from hero to zero in the first 15 minutes of play and mentioned that he didn't want to fold his way to fifth place to secure the Player of the Year title.

Deeb's aggression backfired in three hands on the outer table as he first doubled Alessandro Pelozzi blind versus blind, lost some more chips, and then check-jammed into the flopped straight of Bertrand “ElkY” Grospellier.

“We started five-handed, and you have to take some risks, the variance is always high in those spots,” Grospellier said when asked about the decisive hand against Deeb.

“He limps the small blind, and I have jack-eight suited in the big blind. It is an easy check-back, especially when you consider the stack sizes. I don't think he traps that much, but there is no point in raising and playing a big pot against him.”

Grospellier flopped the second nut straight, and that's when things got interesting already as Deeb bet and called the raise of the Frenchman.

“That was pretty much a dream. Now he leads, and I make it 800k. I could slow play, but I think it is the best flop not to. The turn is an offsuit ten and pretty irrelevant, I don't think he has queens or nines. He can have nine-ten or queen-ten, I guess, but he is probably just raising those most of the time.”

Grospellier bet the turn big, and Deeb eventually got his stack in.

“He tanks for a while and shoves for like 2.3 million more, so I have to snap because it is super-committed. I was surprised he turned over jack-nine actually, it is a really high variance play. The river was a blank, and I won a huge pot.”

Down to Six Players in Quick Succession

The final table was set with the elimination of Deeb, but only nine players would take a seat as Pasquale Braco lost a flip with ace-king against the pocket queens of Dieter Becker at the same time.

Braco's countrymen Francesco Candelari and Alessandro Pelozzi were the next two casualties, and Sergii Karpov vanished soon after to reduce the field to the final six hopefuls.

Candelari was left short after a move against eventual runner-up Avraham Dayan and sent the remainder of his chips over to Dayan minutes later when his king-queen suited was dominated by ace-queen. Dayan also claimed the stack of Pezzoli when he held up with kings against nines, and Marian Kubis turned the nut flush with ace-queen suited against the ace-eight of Karpov to leave half a dozen hopefuls in contention.

While the all-in showdowns kept coming, there was only one elimination in the next two hours, and it was Christoph Peper that fell with ace-ten against the ace-king of Mick Heder. By then, Grospellier was short-stacked and needed a lucky double against Dieter Becker to get back into contention.

One Lucky Double Sets ElkY on Track to Victory

"It was quite tough because I lost a lot of pots early, the blinds go up pretty quick, and it is not forgiving. I shoved jack-ten for eight blinds, and the small blind had ace-king. I won that hand, and after that, I won ace-king against king-jack of the same guy."

While low variance play was the initial plan of Grospellier, things didn't quite pan out as expected.

"Some of the guys were sizing their raises quite big, and it was tough to play against them. They have a lot of chips and are not afraid to get it in. Once I won the two all-ins, it put me into the lead, and I had a good run after that, and I am really happy with the result."

ElkY: "Once I won the two all-ins, it put me into the lead, and I had a good run after that, and I am really happy with the result."

Becker went from chip leader to fifth-place finisher after his clashes with Grospellier. Not even fifteen minutes later, the heads-up duel was already set. Mick Heder got it in with ace-nine against the ace-eight suited of "ElkY" and an eight hit the flop to leave the Dane empty-handed. Moments later, Marian Kubis called the shove of Grospellier with ace-six and found no help against ace-jack.

The duel for the coveted gold bracelet took just over half an hour and was interrupted by a scheduled break. Dayan was unable to close the gap and called a four-bet shove in the final hand with ace-ten suited only to get shown pocket tens. An additional gutshot on the turn brought more hope for the rail from Israel, but it was Grospellier that had reason to celebrate after a blank on the river.

That wraps up the PokerNews live updates from the 2019 World Series of Poker Europe from King's Resort, and the international poker circuit remains in full swing at the end of the year with many more exciting tournaments to come.