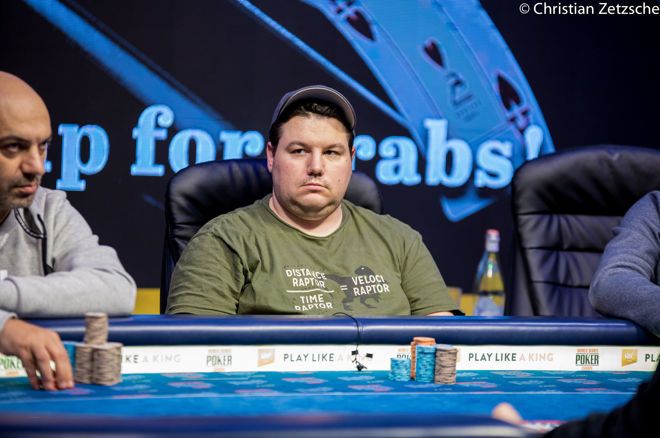 It was a long 12-hour day at the felt on Day 2 of Event #15: €550 Colossus No-Limit Hold'em and the field was trimmed down to the final eleven players. The players have bagged up their chips after fifteen levels, and Mick Heder will be leading the way on the final day with a stack of 12,100,000 chips.

Shaun Deeb, who is not only in search of his fifth WSOP bracelet, but is also hunting down Daniel Negreanu in the Player of the Year race, sits in third place with 8,1 million in chips. Deeb will require at least a fifth-place finish to overtake Negreanu, who is currently leading.

The only other bracelet winner still in contention is Bertrand 'ElkY' Grospellier, who bagged up a stack of 6,450,000.

The day began with 313 players returning to their seats for Day 2, all with the hopes of reaching the final table by the day's end. It was a rush to the payout desk in the opening levels, as nearly half of the field was eliminated by the first break. Some of the notable early eliminations included Daniel Negreanu and Robert Campbell, leaving the door open for Deeb to make a deep run to claim the WSOP Player of the Year title.

As the day went on and the field continued to shrink, Deeb's goal was suddenly within striking distance. He saw his tournament life flash before his eyes after three-bet shoving with jack-ten suited and getting called by pocket queens. With the majority of Deeb's stack at risk, he ran out a flush on the turn and river to build a stack that would get him closer to the final table.

Once the final three tables were reached, the players moved to the balcony in King's Resort. It was apparent that sitting in the "comfy" chairs wasn't enough to keep players in their seats, though. It took less than a level for nine players to hit the rail, and another seat draw took place for the final two tables.

One of the chip leaders coming into the day, Pierre Neuville, had a good start and was one of the big stacks throughout much of Day 2. However, a couple of mistimed bluffs led him to just fifteen big blinds on the final two tables. Neuville appeared to be in a great position to double up with his pocket kings against the pocket queens of Dieter Becker, but a queen on the river ended Neuville's tournament in 18th place.

Becker was also the main reason for Chris Ferguson's demise in 23rd place. Becker chose to make a move with a three-bet shove for 22 big blinds in the small blind, but Ferguson snapped him off with pocket aces. Becker sheepishly tabled king-deuce offsuit, but it was a four-flush on the board that gave Becker the win, leaving Ferguson with just two big blinds.

Day 3 will begin with the 11 players spread out among two tables but will be quickly formed into one after a single elimination. The cards will go on in the air at 3 p.m. local time with the blinds resuming on level 34 at 150,000/300,000 with a 300,000 big blind ante. The levels will be 40 minutes in length throughout with a 15-minute break after every three levels.

The PokerNews live reporting team will be there for the final day of the 2019 WSOP Europe to bring you all of the updates until a winner is crowned. The updates will be on a 30-minute delay to remain in sync with the live stream taking place. WSOPE Live Updates can be found here.