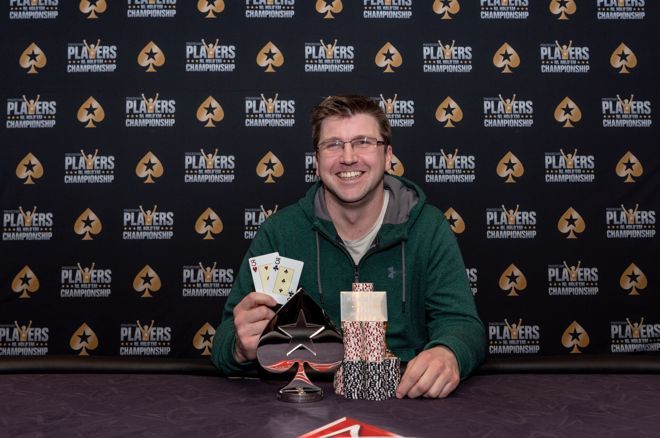 Daniel Stancer, a 32-year-old live cash game pro, has won the £140 Moneymaker Road to the PSPC Tour Newcastle Main Event. He won £7,989 and a Platinum Pass to the PokerStars Players No-Limit Championship in Barcelona besting a field of 436 entries.

Of his win, Stancer said, “It’s not really hit home yet, to be honest, but it feels fantastic.” Since leaving his job in IT support two years ago to focus on live cash games, he has not dabbled in tournaments regularly. “I pretty much came [to Newcastle] for the Platinum Pass,” he admitted, adding, “I’m going to try to get some tourney practice in – the PSPC is the biggest I’ve ever played. Got a bit of work to do, probably.”

“I’m going to try to get some tourney practice in – the PSPC is the biggest I’ve ever played. Got a bit of work to do, probably.”

Of his final table experience, Stancer said that the plan was to "get all the chips - I wasn't bothered about the pay jumps." He had made Day 2 on his second bullet (his first seat was won via UK Poker Room) and had spent the day off after his qualifying flight playing in cash games that he described as being better than those in his hometown of Hull.

Stancer was railed on the final by a few enthusiastic friends, part of a group of ten who are now planning a holiday in August.

“It was all his idea to come here,” they said. “We just changed the name of our group chat from ‘Newcastle’ to ‘Barcelona.’”

A total of 71 players left Aspers Casino with prize money in their pockets. The twin top prizes evened out what is still a huge jump for first: the added Platinum Pass, worth €26,000, includes entry to the PSPC, six nights’ five-star accommodation, €1,250 in expenses, and special Platinum Pass winner experiences throughout the event. As Chris Moneymaker said as he presented Stancer with his Pass: “You’re going to come hang out with us! See you in Barcelona in August.”

Moneymaker, who cashed in this leg of his tour (50th for £267) as well as at last week’s stop in London at Le Meridien (14th for £588), will be heading to Milton Keynes for the next leg of the Road to the PSPC. His journey from online satellite qualifier to WSOP Champion inspired this tour, which gives grassroots players a chance at the same kind of life-changing opportunity for an affordable buy-in.

A dozen returning players had to leave the tournament without prize money; the bubble, however, burst in record time, and the pace of play continued somewhere between rapid and breakneck for the entire day.

Making the money, but finishing shy of a final table appearance were the likes of Fraser MacIntyre (68th for £204), online qualifier – and winner of a Platinum Pass Experience seat next week – Joss Murdoch (58th for £240), and prior Platinum Pass winner Nikolay Ponomarev (11th for £732).

The final table went from ten-handed play to setting up for a winner’s photo in just two and a half hours of non-stop action.

After Kyle Soakell ran jacks into aces early on to bust in 10th (£732), the chips were distributed very unequally, with over half the chips in play divided between the top three stacks of Ahmed, Liam McMurray, and Jed Turnbull. The former then went on a steamroll of shorter stacks, first busting Paul Herbertson in 9th (£994), then letting Stancer take out Ryan Kilbey (8th for £1,308), before taking the scalps of Chun Lu and Thomas Peggs in quick succession.

Kilbey had been active at the start of the final table but had not found a double-up spot and lost his final race (deuces vs. king-queen suited); Lu found his own king-queen no good against Ahmed’s ace-ten and collected £1,648 for 7th place. Peggs, too, ran out of wiggle room chip-wise and jammed ten big blinds with ace-ten offsuit only to run into ace-queen.

After the final table’s first break, Stancer cracked Turnbull’s kings with ace-six straight away in a hand on which his eventual victory pivoted. Turnbull bust in 5th (£2,459), and a very short-stacked Konstantinos Patsourakis laddered up to finish 4th (£3,275). Liam McMurray just missed out on one of the joint top cash prizes when he lost a tens vs. ace-king flip to Stancer, but £4,473 was still a healthy return on his £140 investment.

Heads up saw a strange mixture of quick-fire small ball pots and massive bluffs (made by Ahmed), but in the end, Stancer had his opponent all-in with a 4:1 chip lead, flipping pocket threes against queen-jack suited. A lack of board overcards and it was all over, Ahmed picking up £7,586 while Stancer won £7,989 and the trip of a lifetime to Barcelona.