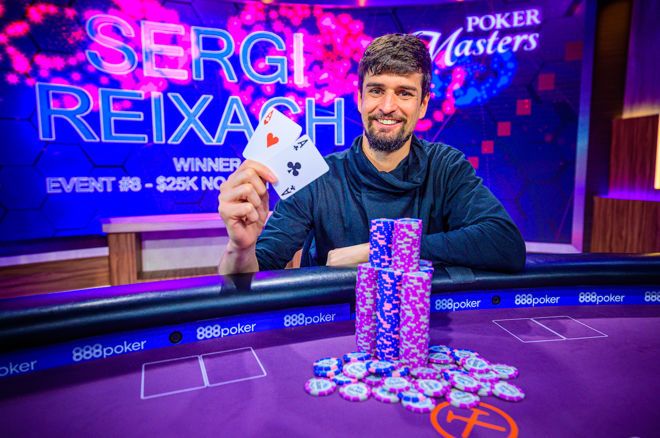 Spain’s Sergi Reixach is the latest poker star to get his hands on a 2019 Poker Masters title after he came out on top of a 41-strong field in Event #8: $25,000 No-Limit Hold’em. It was an impressive victory for the Spaniard and a finish worth $369,000, the second-largest of his live poker tournament career.

With only two events remaining after this one, some of the world’s best poker players exchanged $25,000 of their bankroll for the chance to climb up the Poker Master leaderboard and get their hands on the coveted purple jacket.

In what was one of the toughest fields assembled with the likes of Anthony Zinno, Cary Katz, Chance Kornuth, Ben Heath, Nick Petrangelo, Alex Foxen, Erik Seidel, Byron Kaverman, Kahle Burns, and Dan Smith all busting out before the top six finishing positions were reached, the official final table.

It was Petrangelo who finished in seventh place and burst the bubble. Sean Winter opened to 140,000 from late position and had an easy call to make when Petrangelo shoved for only 190,000 on the button. Winter turned over kings, Petrangelo sevens, and the rest was history.

Reixach Eliminates Everyone at the Final Table

Reixach, known as “srxakgirona” in online poker circles, is in great form having won the €100,000 Super High Roller at EPT Barcelona for €1,816,210 in August. He continued his run good by sending Winter to the rail in sixth place and then Hungarian high stakes specialist Andras Nemeth to the showers in fifth.

The Spaniard then dispatched Sam Soverel in fourth place. Soverel was all-in for his last eight big blinds with queen-ten, and Reixach looked him up with king-five. Both players made a pair; Reixach’s was the larger of the two, and Soverel exited in fourth place. The points Soverel collected for his fifth cash of the series catapulted him to the top of the championship leaderboard.

Start of day chip leader, Turkey’s Orpen Kisacikoglu, was Reixach's next victim. Kisacikoglu was in great shape with his jacks way ahead of Reixach’s eights, but when you run good, you really run good. Reixach improved to quads by the river and continued his one-man wrecking spree.

George Wolff was the last player to feel the wrath of Reixach, committing his stack with a pair on a queen-six-seven flop only to discover Reixach was sat there with aces in the hole.

Only two events remain in the 2019 Poker Masters, and one of them has reached its final table. Event #9: $25,000 No-Limit Hold’em is down to six players and Ali Imsirovic leads before Kahle Burns. David Peters, Elio Fox, Sam Soverel, and Sean Winter make up the rest of the table.

Soverel is guaranteed even more leaderboard points after banking his sixth cash of the festival. Chance Kornuth will be hoping Soverel doesn’t go all the way and that he is still catchable when the final event shuffles up and deals.

That final event is the massive €100,000 No-Limit Hold’em Main Event that is sure to see one of the most stellar fields ever assembled. We cannot wait.