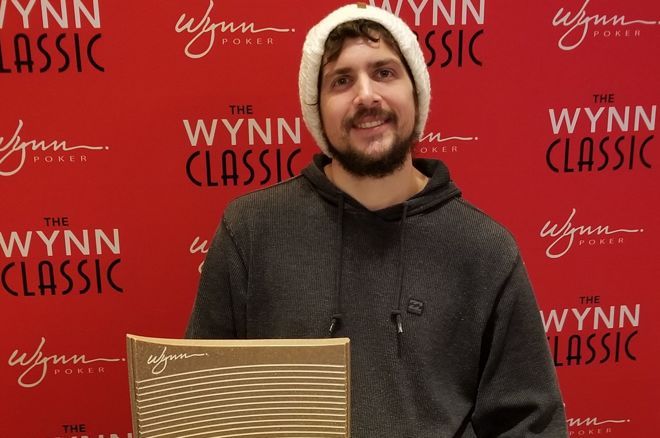 The inaugural Wynn Winter Classic $5,300 buy-in Championship Event – the biggest buy-in tournament the venue has held in over five years – crushed its $1.5 million guarantee as 557 entrants created a $2,740,440 prize pool.

It was Rocco’s long-awaited signature win and a new career-high score passing his previous best of $423,440 for finishing third in the 2014 World Poker Tour LA Poker Classic. He also finished third in the 2017 PCA $25K High Roller for $409,020.

"After spending the time learning new things I feel like I have a different approach to playing.”

“I feel very tired and very good at the same time. It was a long day,” Rocco said after the win. “I’ve never won a big tournament. My three biggest scores prior to this were third place. So, I’ve always gotten down there but never been able to close it down. Now I feel like I’m in a pretty good place compared to where I’ve been before.”

Rocco credits a recent trip to Africa in helping his honing his game: “I’ve tried to relearn how to play poker better. I was studying every day for 8-10 hours, which I’d never done before. I was playing bad for a really long time and I just didn’t realize it. After spending the time learning new things I feel like I have a different approach to playing.”

He continued: “There’s so much work to do if I want to be where the best players are. I still have so many leaks compared to them. If I want to play at the highest level I have to keep working every single day … Now, moving forward, I need to work way harder. If I want to play the high rollers, which I do, I just have to try as hard as I can.”

At the final table, Josh Bergman was the first to fall after running pocket tens into Matt Yorra’s aces, and then the short-stacked Adam Hendrix followed him out the door after his king-five went down to Joe Kuether’s king-deuce after a deuce appeared on the flop.

The next-shortest stack was Sweden’s Tomas Soderstrom, and he took his leave in seventh place after jamming with jack-nine suited and failing to get there against Dyer’s ace-ten. Soon after, Yorra bowed out in sixth after losing a race with pocket nines to Dyer’s Big Slick.

Kuether then lost a race with ace-ten to Ben Farrell’s pocket sevens to finish in fifth place, and then it was time for Louis Salter to go after losing ace-eight to Farrell’s ace-jack all in preflop.

During three-handed play, Dyer doubled through Farrell ace-jack to ace-seven, and then the latter lost the rest of it to the former a short time later busting with queen-four to ace-eight suited. That set up a heads-up match in which Rocco held 17.675 million to Dyer’s 10.2 million.

Dyer got short, managed a double, and then the final hand developed. Rocco had flopped two pair and jammed big on the river. Dyer had nut no-pair with ace-queen and opted to call it off only to see his run come to an end in second place for $353,242.

The Wynn will host its next series – Wynn Signature Series – from January 15-February 2, 2020. The festival guarantees more than $1.3 million in prize pools. Click here for further details.