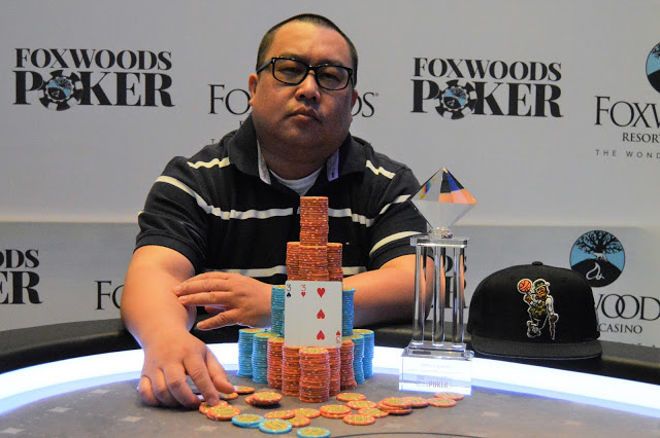 Earlier this week, the Foxwoods Poker Classic wrapped up its $2,500 Championship Event, which passed its $300,000 GTD by drawing 183 entries and generating a prize pool over $400K.

Back in 2015, Kachittavong also won the Foxwoods World Poker Finals Main Event for $76,037. He also finished as runner-up in the 2017 Foxwoods Poker Classic Championship for $70,679.

According to updates from the event, Kachittavong finished Day 1b as chip leader and started Day 2 second overall. However, by the time the third and final day rolled around he sat towards the bottom of the counts with 11 players remaining. Luckily, an early double got him off to a good start and he never looked back.

With four players remaining in Level 27 (25,000/50,000/25,000), Kachittavong and Dave Stefanski got into a preflop raising war that saw the latter five-bet jam. Kachittavong called off for 1.9 million holding aces, which were well out in front of Stefanski’s queens. The aces held and Kachittavong took over the chip lead in the biggest pot of the tournament.

After Kachittavong finished off Stefanski a short time later, WSOP Crazy 8’s champ Galen Hall and Kachittavong clashed when the former got all in holding ace-queen and was flipping against the latter’s pocket jacks. A jack on the flop closed the door on Hall, who had to settle for third place and $41,537 in prize money.

Kachittavong began heads-up play with over a 2:1 chip lead against Paul Snead and it didn’t take them long to get it all in preflop.

"I've won a couple tournaments with this hand that's why I'm going to call" Kachittavong said before calling Snead’s shove. Kachittavong’s pocket threes proved to be way out in front of Snead’s deuces and held after a clean runout. Snead took home $65,523 for his runner-up performance.