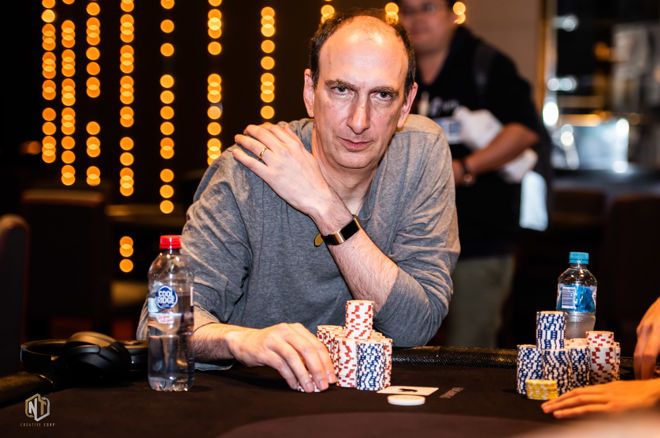 After more than 14 hours of poker action in the poker room of the Crown Casino complex in Melbourne, the seven-handed final table of the 2020 Aussie Millions A$10,600 Main Event has been set in the second-biggest field of 820 entries. Seven players from six different countries will return to the feature stage at 12.30 p.m. local time on Friday, January 24th, 2020, to play down to a champion and Erik Seidel headlines the final table line-up.

With over US$37 million in lifetime earnings, it's no secret that Seidel is more accustomed to final tabling Super High Rollers than 800-player fields. Just last week, he finished eighth in the Aussie Millions A$50,000 Challenge for A$198,850, and says that the Main Event field is very different to the High Roller scene.

Seidel sits in the middle of the pack with 3,975,000 and returns with 68 big blinds to the deep-stacked final table. The American currently sits second in the all-time money list at Crown Melbourne ($6,707,142), and a victory would get him within very close reach to none other than Phil Ivey, who won over $8 million in Australia.

Nino Ullmann, who already led the field into Day 4, sits at the top of the leaderboard with a stack of 5,500,000 and he is followed by fellow German Oliver Weis with 4,475,000 and local cash game player Vincent "wonky" Wan (4,150,000). Wan is dubbed by staff as one of the luckiest players in the casino as he has already won the Royal Flush jackpot twice when a six-figure prize was up for grabs.

One of the stories of the penultimate day in Melbourne was the quest of Mike Del Vecchio to reach an unprecedented third consecutive final table and the American poker pro came narrowly close once more. Especially early on, Del Vecchio was able to build his stack consistently and he was among the bigger stacks when the final three six-max tables were reached.

However, after bagging on 11 out of 11 consecutive tournament days, Del Vecchio was eventually sent to the rail in 10th place. After dropping to a short stack, he doubled with a full house over full house and it then took the biggest of setups in No-Limit Hold'em to end his amazing run. Del Vecchio held pocket kings and Vincent Wan tabled pocket aces, an ace on the flop all but sealed the fate and the turn paired the board.

One of the most spectacular hands of the day took place on the final two tables and it represented a turning point for Oliver Weis, who is one of many German poker pros that call Vienna their home base these days. In three-way action, Weis got it in with a gutshot and flush draw to find himself up against the nut flush draw of Michael Sideridis and the set of Vincent Wan. Weis hit a miracle straight for the triple up and Sideridis was ousted in 11th place.

It took another two hours from there on to determine the seven finalists, who now get to enjoy a day off in preparation for the final table. The extra rest will no doubt be rejoiced by Seidel who voiced his concerns on Twitter regarding the length of the Main Event days. The final seven had to duke it out during an almost 15-hour day to secure a seat at the final table.

"I'm thrilled to get a day off," said Seidel. "I do think they should add a day or if they can't, maybe shorten some levels because I really needed this day off."

The seven players will take a much-needed day off to prepare for the final table, which will commence on Friday, January 24 at 12:30 local time. On Thursday, the final day of the A$100K Challenge will play to a winner first. Make sure to return to PokerNews for the final two days of the 2020 Aussie Millions!