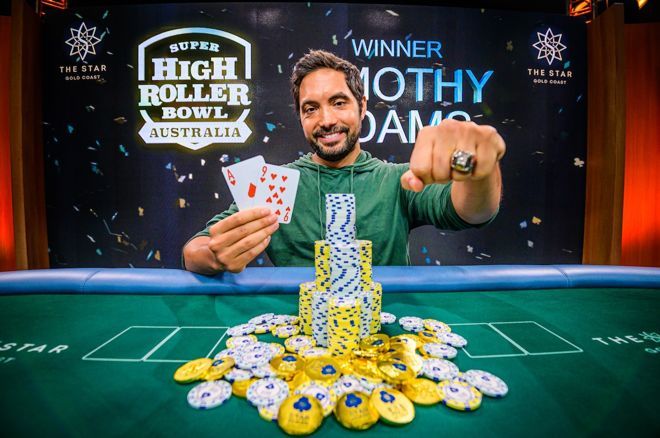 A month of incredible poker action Down Under wrapped up with the AU$250,000 Super High Roller Bowl Australia, and nosebleed regular Timothy Adams emerged as the latest SHRB champion, pocketing AU$2,160,000 (~$1.44M).

While Adams is a regular participant in the biggest tournaments in the world, this is his first cash in the SHRB series. It's his third-biggest live cash and pushes him past $20 million overall.

The score followed good runs in the Australian Poker Open, where he won a AU$25K event for AU$416,500, and Aussie Millions, where he made final tables in the AU$100K Challenge and AU$50K Challenge.

Just 16 entries would be logged, making SHRB Australia the second-smallest event in the tournament's history after only Super High Roller Bowl London.

According to the live updates on Poker Central, Kahle Burns and Elio Fox were virtually tied atop the counts going into the final table. Australian poker hero Burns was coming off a win in the aforementioned AU$100K Challenge and has generally been on fire of late, having also been inducted into the Australia Poker Hall of Fame last month. Fox would score two of the final three eliminations heading into the streamed final table to secure the lead, while Adams sat in third place with a very healthy 79 big blinds.

Burns grabbed control on the final day with a huge bluff catch against Fox. On a board of

, with Fox only able to muster

for an inferior missed draw.

. Burns had more than half of the chips in play at that point and looked to be a strong favorite.

Recent high roller entrant Aaron van Blarcum and Cary Katz were the two players in the most danger on the bubble with about 40 big blinds apiece. It would be van Blarcum going down on the bubble as the famously hard-to-kill Katz made his usual tricks work. Van Blarcum lost a heap with top pair to a turned flush held by Burns then got the rest in with

against Burns' nines to bust.

Katz hung around for awhile with between 10 and 20 big blinds, but his survival act finally ended when he called off with king-deuce and couldn't hold against the ten-eight of Adams.

About 45 minutes into heads-up play, Adams flopped top pair with

from the button when Burns three-bet with

. That hand also connected with the

board but only served to motivate him to pay off a large river bet after the first two streets got checked.

Then, Burns tried getting value with

, betting big on the river on

in a three-bet pot. Adams had hit a flush with

and shoved all in. Burns used his remaining time extensions then called for most of his own chips and found himself under 10 big blinds.

Burns worked his way from 175,000 to 835,000 but Adams squashed his comeback hopes when his ace-high hand paired aces and turned two pair against

This one feels really special,” Adams said to Poker Central reporters. “The buy-in is very big and the field is very tough."

Here's a look at all of the SHRB events to date:

Phil Galfond Buried Against 'Venividi1993' One Week Into "Galfond Challenge"