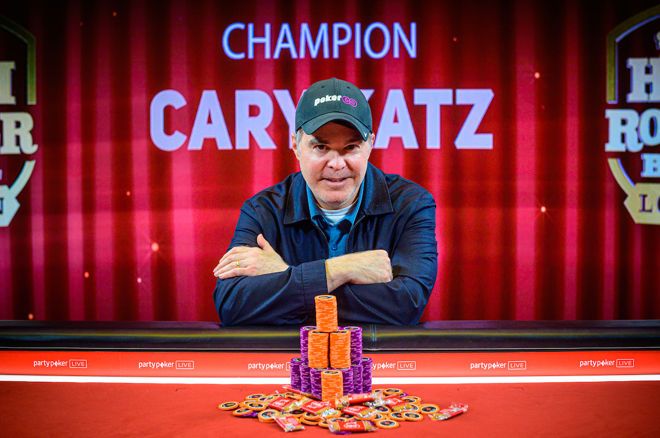 The seventh edition of the Super High Roller Bowl (SHRB) kicked off in London at Aspers Casino on Friday following the completion of the brand new British Poker Open. The £250,000 buy-in event (~$312,650) drew 12 runners to create a prize pool of £3 million (~$3,751,803) and it was “El Jefe” Cary Katz coming out on top of a stacked field to secure the largest cash of his poker career.

Katz defeated the Bosnian phenom Ali Imsirovic heads up to add his name to an elite list of Super High Roller Bowl champions: Brian Rast, Rainer Kempe, Christoph Vogelsang, Justin Bonomo (who won in both Las Vegas and China) and Isaac Haxton. He also claims the honor of winning the first-ever SHRB held in London.

"I think I played by far the worst today but I just got the luckiest but I’ll take it.”

“This is my biggest score and I was just remarkably lucky,” a humble Katz shared with Poker Central’s reporters following the victory. “I got lucky on the hands that mattered after what seemed to just become a slow demise. I’m not in their league and I would just like to take my hat off to Stevie, Christoph, and Ali. I think they all played so much better than I did and I think they were all more deserving. I just got very lucky.

“I think Stevie really deserved to win; he played absolutely perfect but he just kept losing all the races. Vogelsang also played terrific and Ali play unreal so I think I played by far the worst today but I just got the luckiest but I’ll take it,” Katz added with a smile.

Friday’s Day 1 saw the eliminations of Michael Addamo, Bryn Kenney, Matthias Eibinger and Timothy Adams. With that, the final table of eight was arranged with Katz leading and before play wrapped up for the day, they lost four-time WPT champ Darren Elias.

Responsible for the eliminations of both Adams and Elias, Germany's Vogelsang overtook Katz for the chip lead going into the final day of streaming with seven players vying for the cash awaiting the final two.

It was still anyone’s game but early on, Poker Masters champion Imsirovic thinned the dangerous field by eliminating short stacks David Peters and Sam Greenwood in the same hand. With pocket aces in the three-way all in, Imsirovic had his American and Canadian high-rolling colleagues drawing dead on the turn, holding fives and eights respectively.

Imsirovic continued his tear by eliminating Mikita Badziakouski next with pocket kings holding up against ace-jack, taking the lead in the process.

Four-handed favored Vogelsang for some time as he rose back into the lead where he hovered along with U.K.'s Stephen Chidwick. Katz had dropped to shorty status but the Poker Central founder continued to find key doubles, eventually gaining traction by winning flips against Vogelsang and then Chidwick to steal the lead from the latter.

“I got lucky on the hands that mattered after what seemed to just become a slow demise."

Chidwick would be the next out, losing most of the rest to Imsirovic on the bad end of a flip with ace-queen against pocket tens that flopped a set. Vogelsang became the short stack and shoved pocket sixes but couldn’t hold against the red-hot Imsirovic who flopped trip sevens holding king-seven.

The Bosnian who has stormed onto the high roller scene over the past year went into heads-up against his friend Katz with the lead, but the latter quickly pulled ahead, keeping the pressure on with some well-timed semi-bluffing and connecting with the board in key pots.

There were several lead changes as the battle ensued, and it would be decided by a cooler in the end. Imsirovic was working on mounting another comeback when he turned a set holding pocket tens. Katz, who had flopped the second-nut flush draw with queen-three of spades, called the flop and turn to see his flush come in on the river. Imsirovic’s river shove was met with a snap-call and Katz secured his biggest poker cash in his 15th high-roller victory.

The runner-up prize of £900,000 (~$1,125,541) was also the biggest career live cash for the young Imsirovic, who made his big high-roller breakout winning the Poker Masters a year ago. His first of what is likely to be many seven-figure scores brings his lifetime live poker earnings over $7 million as his budding poker career only heats up.

Sam Soverel was the clear frontrunner to win the series leaderboard during the 10-event British Poker Open, booking five cashes including two victories along the way. That brought the American poker pro’s cashes for the series to $966,462 as his total live earnings rose to $11.4 million.

"I'm not really a trophy guy but because everyone else wanted it so much, and I got to keep it, it was pretty sweet winning it!"

"It was a great series for me," Soverel said when he collected the trophy. "I feel like I ran really good leading up to the final tables in pretty much every tournament including the ones I didn't cash. I didn't go all the way in all of them but I did really really good, and it was a fun series for someone who plays high stakes."

He added: "I'm not really a trophy guy but because everyone else wanted it so much, and I got to keep it, it was pretty sweet winning it!"

Here’s a look at the 2019 British Poker Open winners, followed by the final points standings for the series leading up to the SHRB.

The next Super High Roller Bowl will be taking place during the Caribbean Poker Party in the Bahamas in November. Be sure to check back right here at PokerNews for updates on all the biggest tournament action.