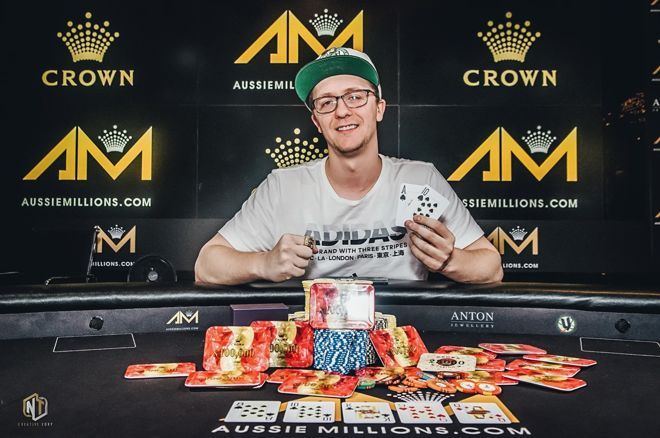 It's just the latest, albeit greatest, win in an absolute tear Burns has been on since the start of 2019, racking up more than $6 million in cashes according to The Hendon Mob. In recognition of his abilities and accomplishments, he received induction into the Australian Poker Hall of Fame earlier in this festival, and this win provided the latest evidence for why he's considered one of poker's brightest stars.

"This is the first tournament I've won on the Aussie Millions circuit and obviously it's a fantastic one to win," he said.

Burns didn't start Day 2 with a particularly imposing chip stack and actually slipped relative to the rest of the field by the time the nine-handed final table convened, starting in eighth place. There, Burns made his move up the counts during a four-hour stretch without eliminations as two of nine were scheduled to go home empty-handed.

Any bubble situation in a poker tournament typically brings an intense atmosphere, an A$100K event especially so. But what made this bubble particularly tense was a large minimum cash of A$317,250.

"It was a pretty gross spot on the bubble for everybody involved," Burns said.

Burns found a good spot to get his chips in the middle, shoving with ace-king over a raise from high roller newcomer Aaron van Blarcum and a call from Michael Zhang. When Van Blarcum called and Zhang back-shoved with jacks, it created a dream spot to flip as Burns got a juicy price and then found a king-high board to triple up.

"That sort of put me in an above-average stack spot and then I was able to accumulate some chips on the bubble," Burns said.

Indeed, by the time Zhang bubbled out in an unlucky hand to Bryn Kenney, Burns had secured a decent-sized lead thanks in no small part to a couple of timely bluffs made possible in part by his threatening stack.

After that, Burns' lead was only at risk once. This time, his tens held against the ace-king of Kenney, who was trying to follow a 2019 Aussie Millions Main Event win with a $100K crown but fell in fourth, the second of four consecutive knockouts for Burns.

He then made mincemeat of short-stacked Van Blarcum, setting up a heads-up match with old rival Alex Foxen, who had been in danger a couple of times at the final table before being dealt timely aces.

A bit of a partisan crowd had gathered to cheer Burns on by then, friends and parents showing up despite the late hour. Burns didn't disappoint them as he finished Foxen off quickly and without much drama, pairing his kicker with a dominating ace.

"I actually didn't tell any of my friends I made the final table," Burns said. "They were nice enough to come down and support me so, yeah, it's a great feeling to do well in front of them and give them something to watch and enjoy."

Burns credited his cash game experience with guiding through the early portions of the tournament, giving him the ammo he needed to survive the later, higher-variance stages. Where other players seemed to often find themselves down to a few big blinds and in desperate need of a double, Burns was usually the one with enough chips to set others at risk.

"My style is...I can run up a big stack early in tournaments," he said. "And if you have a big stack on the bubble or around the money, you can push that towards not dwindling at the final table."

Burns has proven he does anything but dwindle at final tables, with three six-figure victories including two bracelets plus this seven-figure win just since October. He's already second on Australia's all-time money list to national legend Joe Hachem. That Hall of Fame induction looks sharper by the day, and at the rate Burns is shredding the scene, plenty more accolades may lie in his future.

With the A$100,000 wrapped up, all eyes dart back to the Main Event where the final table will kick off on Friday, January 24 at 12:30 p.m. Melbourne time. Don't miss a beat and make sure to return to PokerNews for the climax of the 2020 Aussie Millions!