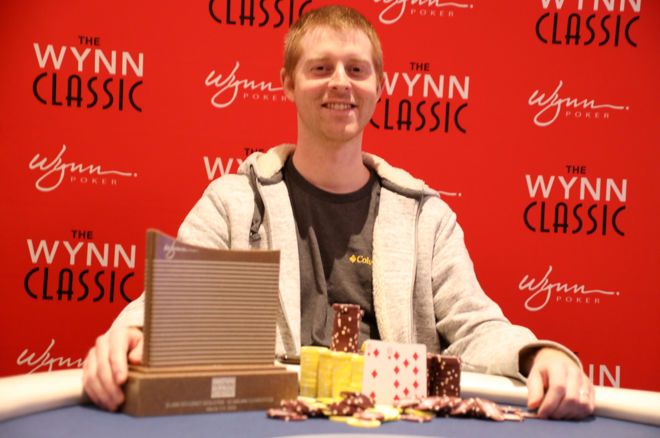 The Wynn Spring Classic $1,600 buy-in NLH $1,000,000 GTD attracted a total of 687 entrants, and after five days of play, Kevin Buck collected the title and $166,837 first-place prize after staging a massive comeback to defeat Justin Bond heads-up.

"I just ran good," Buck said after the win. "Made hands at the right time. That was pretty much it."

Buck entered the final day fifth overall, but he was the big mover from the start soaring up the leaderboard and picking up cards at the right time. Buck doubled into the chip lead when he turned top pair and had to fade James Hundt's flush and straight draw. From there, Buck would find queens in the big blind when Alessandro Siena three-bet shoved the small blind with ace-queen, and when the field was down to the final table of nine, he sat with a 150-big blind stack which was 70 big blinds greater than his nearest rival.

Jim Pennella was an early casualty when he lost a race holding ace-king against pocket nines, and Denmark's Martin Stausholm soon followed him in eighth-place when his ace-queen couldn't spike against pocket tens. Hyung Kim lost a pot that left him with an ante, and after he exited in seventh-place, six players headed to dinner break with Buck holding just under half the chips in play.

Jerry Xiong found an ace on the button but ran into the pocket jacks of Buck to fall in sixth place as chips began circling between the final five. Behzad Teranie tripled with aces, then Nikolaos Platis doubled with a straight before Peter Vitantonio ran his king-queen into Teranie's ace-king to fall in fifth place.

Bond found a huge double when he spiked the river to leave Teranie short, and after tripling through, the latter's run would end in fourth place to Bond. Buck and Bond both sat even in chips, but Platis would win a pot with aces to move him to the top. However, just a few hands later, Buck would double through Platis to hold half the chips in play when he caught his wheel on the turn. Platis would lose a race with his pocket fives to Bond's ace-nine to be eliminated in third place.

With Bond holding a slight chip lead over Buck, the two agreed to chop the remaining prize pool after setting aside $20,000 for the winner. Bond immediately took control of the heads-up match as he extended his chip lead to a four-to-one lead at one point as Buck was down to just ten big blinds. Buck, however, found several doubles before clawing back to even, and then into the lead before the final hand.

"I just played my stack. Play what I have, and play it right."

Buck made runner-runner chips, and after betting the river, Bond check-raised all in. Buck thought for roughly a minute and then made the call as Bond showed his ace-high to fall in second place as Buck was crowned the champion.

"I just played my stack," Buck said on when he was down to ten big blinds. "Play what I have, and play it right."

Congratulations to Kevin Buck, winner of the Wynn Spring Classic $1 million guarantee and the $166,837 first-place prize.