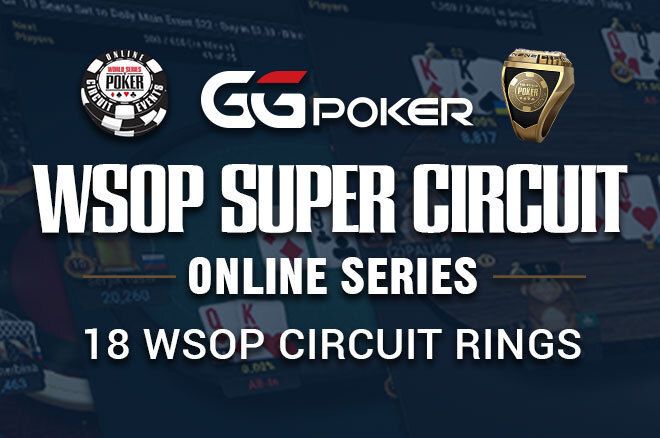 GGPoker and the World Series of Poker (WSOP) announced that an all-new, unprecedented online poker event named 'WSOP Super Circuit Online Series' will debut on the GGPoker Network in May.

According to a press release released on April 15, the tournament series will consist of hundreds of individual poker tournaments, with a coveted World Series of Poker Circuit ring awarded to the winner of 18 headline events.

The WSOP online series will also extend two invitations to the $1,000,000 freeroll World Series of Poker Global Casino Championship official bracelet event, one to the Main Event winner and one to the overall series points leader.


After the success of the WSOP.com Online Super Circuit Series, Executive Director of World Series of Poker Ty Stewart said he was excited to bring the WSOP brand to GGPoker.

"We’re thrilled to partner with an operator on the rise who is both aggressive and passionate about growing poker engagement around the world," Stewart said on Wednesday.

"It was unfortunate that we were forced to cancel so many offline WSOP Circuit events this Spring, but with vast reach, GGPoker plans to dwarf the prize pools of the suspended events all at once in one truly Super WSOP Circuit."

Meanwhile, Head of GGPoker Jean-Christophe Antoine was equally thrilled about the new partnership.

Six-time WSOP bracelet winner and GGPoker Ambassador Daniel Negreanu will be one to look out for at the tables, and also praised the announcement.

"I give credit to the WSOP for bringing the circuit online during these trying times. Winning a circuit ring is a great honor. Online players will love the experience of chasing rings at GGPoker.”

When Will It Take Place?

Although no official date has been announced, the note shared by the two companies states that tournaments will begin in early May and continue for approximately three weeks.

A full tournament schedule will be announced soon.

Launched in 2014, GGNetwork initially focused on its Chinese and South East Asia-facing operations before expanding into Europe and Canada only a few years later.

As of 2020, it is ranked fifth in the world on Pokerscout, an industry traffic monitor.

According to the GGPoker website, players from the following countries cannot open accounts, make deposits or play on the site:

GGPoker also reserves the right to amend the list of countries from which it will not accept users from time to time in its sole discretion.

Sign up for GGPoker now through PokerNews and collect a ticket package worth £30!

All players have to do is enter the Bonus Code PokerNews when creating a new account via the signup page.

Eligible players will receive a ticket package worth a total of $30:

Free tickets will be valid for seven days from the time of new account creation, and cannot be exchanged or transferred.