“Keep the Lights On” Initiative Exceeds Expectations By Raising $30,000 for Poker Media 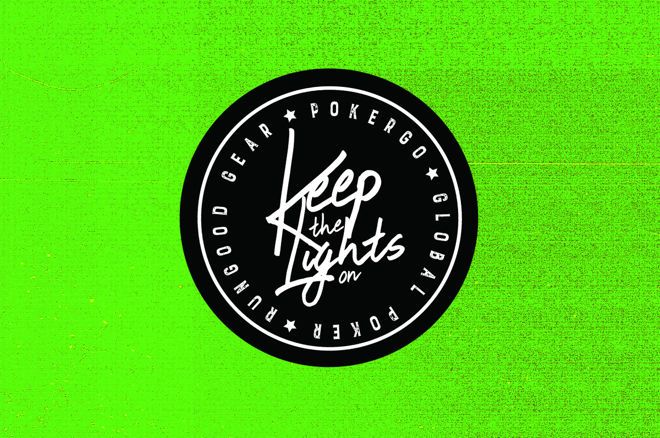 At the end of April, the RunGood Poker Series (RPGS), PokerGO, and Global Poker, along with others in the industry, embarked on a mission to raise funds for freelance poker media to help cover utility bills during the pandemic.

Three weeks, nine live streams, and dozens of donations later, the “Keep the Lights On” Initiative exceeded its $4,500 goal by raising nearly $30,000. What’s more, donations are still being accepted via this link.

The fundraiser was simple. RGPS, Global Poker, and PokerGO all put forth a champion – Jamie Kerstetter, Brian “The Golden Blazer” Frenzal, and Jeff Platt respectively – who each played 10 tournaments on a live stream once per week for three weeks. They raised funds via donation pledges for each event they cash.

Each streamer started with 300 “sweep coins” on Global Poker and competed in a bankroll challenge among the three of them. To motivate the streamers, whichever one finished with the largest bankroll at the end earned a seat into the All-Stars PRO-AM Live Event at PokerGO Studios in December

Team PokerGO’s Jeff Platt took first place honors in that challenge after surpassing Frenzel in the final stream. Anyone who pledged at least $5 to Platt’s stream received a ticket to a private qualifier for the year-end PRO-AM, and the winners from that tournament were Tyler Burke, Andra Zachow, and Kerstetter.

How the Number Stacked Up

Approximately $30,000 was raised for the fund through pledges, one-time donations (including $7,500 from Brandon Steven and $5,000 from Phil Hellmuth), and special edition hoodie sales.

Here are the final bankroll numbers and amount fundraised through pledges:

PokerNews recently chatted with RGPS President Tana Karn, who spearheaded the Keep the Lights On initiative.

PokerNews: How do you feel about the Keep the Lights On fundraiser as a whole?

Tana Karn: I feel completely over the moon. We went into it all without any expectations really. It was a huge weight lifted off our shoulders when donations came immediately as well as an outpouring of support for the initiative. The generosity of this community and industry is something to be admired. The biggest surprise for me was seeing Jeff Platt take down the bankroll challenge. Going deep in the last tournament of the last stream to inch by Global Poker was a fun sweat.

"Freelance poker media are encouraged to submit fund requests as we chip away at the fund which looks to be able to cover many months of bills."

The amount raised was far ahead of the original goal. What's the plan for the fund?

The first wave of fund disbursement has completed and a second wave has commenced. The reason we chose utility bills is to allow us to have a paper trail of where and why funds are going to. Freelance poker media are encouraged to submit fund requests as we chip away at the fund which looks to be able to cover many months of bills by sending in the following to [email protected]:

Please attach a picture or an actual PDF of your utility bill. Feel free to redact any personal information.

What's next for you and the RGPS family?

We have a couple of projects brewing but getting back on the road for the tour is what we're all anxious for. The All-Star ProAm theme this year was designed with a priority on winning our third Global Poker Award for Best Mid-Major Poker Tour. Even with 2020 being derailed, we look towards Fall to get back on track and deliver everything we got in the tank.