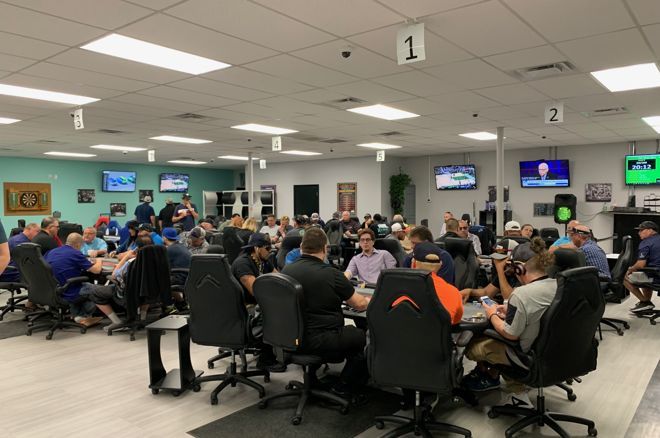 While many cardrooms across the country have reopened over the past three weeks, poker players have wondered when they might see the return of tournament poker. For those in Midland, Texas, the answer is this week as the West Texas Poker Championship Series will run from June 18-28 at Kojack’s Poker Club.

The series, originally scheduled for earlier this year but postponed due to the COVID-19 pandemic, is comprised of eight events including a $600 buy-in Main Event.

Kojack’s Poker Club was closed from March 18-April 30. They began a phased reopening on May 1 gradually and have now worked their way back to customary nine-handed play.

“Our part of Texas was not hit very hard, the local player base wanted it, and nothing else going on around the world,” Kojack’s founder John Dunn told PokerNews when asked about bringing back tournament poker. “We did remove the GTD’s and big expectations because we don’t really know what the turn out would be. Texas is very pro-business and hasn’t handed down strict guidelines.”

Even so, Dunn and his staff are taking precautions.

“We have CDC signs posted, check everyone’s temp upon entering, we have mask and hand sanitizer available, clean down cards and chips frequently,” Dunn explained. “We have been open for over 40 days and haven’t seen any issues with staff or members. Common sense and good hygiene go a long way.”

While there are no casinos in Texas, cardrooms have sprung up across the state in recent years. Some believe the rooms operate in a grey area of the law thanks to various legal loopholes, and while rooms elsewhere have experienced troubles, Kojack’s and others continue unabashed.

"Midland is known for oil and oil tycoons with a ton of money flowing in the area, but not a real form of entertainment. So, it became a match made in heaven."

For Dunn, who spent a few years in the PBR as a professional bull rider until suffering an injury, poker proved a great competitive outlet. He started taking the game seriously in 2012 in a local bar league, and a year later he was playing tournaments in Vegas and nearby Choctaw Durant.

“In 2017, I was sitting in Choctaw and heard some players talking about some legal poker rooms in Texas and the light bulb went off,” he said. “I’ve been an entrepreneur since 2001 having several different businesses and knew that I could make it happen. I figured if I don’t do it someone else will. I saw an opportunity to get in on the pioneering stages of an industry in Texas. Midland is known for oil and oil tycoons with a ton of money flowing in the area, but not a real form of entertainment. So, it became a ‘match made in heaven.’ Players will see that many of our dealers in the box will be recognized from over the years at WSOP and circuit stops. They came and joined the team and the vision.”

Kojack’s is technically a private club operating on a membership basis, though most anyone can join via either daily, monthly or annual memberships. Plus, when they have tournaments like the West Texas Poker Championship Series, they offer sales to entice players to participate.

Race to Ease Gaming Restrictions Comes Down to the Wire (Act)