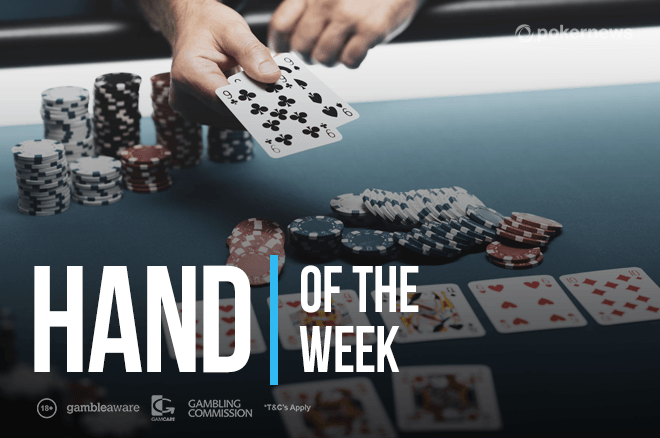 In the GGPoker portion of the schedule, Event #41: $400 COLOSSUS attracted a staggering 12,747 entries, and once the final table of nine was established, the tournament went on a five-day hiatus. Interestingly, no one at the final table had more than 33 big blinds, with a couple in the single digits. That suggested it would be a quick affair when play resumed over the weekend, and that turned out to be the case as it took just 90 minutes to crown a winner.

Fittingly, the action heated up right out of the gate in the very first hand of the final table. It took place in Level 31 (2,500,000/5,000,000/500,000) when Ajay Chabra moved all in for 27 million from middle position and Paraskevas Tsokaridis called on the button. Both blinds got out of the way and the hands were turned up.

flop keep Chabra firmly in the lead, and the

turn meant all he needed to do was dodge an ace on the river to double. Unfortunately for him, that proved easier said than done as the

spiked to give Tsokaridis the win.

What If Kuznetsov Had Called?

That time, Wei "dugui777" Zhao reshoved and Jeffrey "hockeysyrup" Mallach also moved all in to force out Nikita "VSMPZD" Kuznetsov in the big blind, who flashed

after the hand was over.

and Mallach scored a huge double while Punjabi was eliminated in ninth place for $11,564. What made this hand interesting was GGPoker’s fun feature for players to reveal their holdings after the hand, even if they weren’t involved. In this case, Kuznetsov’s Big Slick would’ve won and presented an unanswered “what-if” scenario of how things could’ve played out had he called from the big blind.

Trio of Bluffs Close Out WSOP.com Portion of the Schedule

On Friday, the WSOP.com portion of the schedule came to a close when Nahrain “2Rivers” Tamero emerged victorious in Event #31: $1,000 NLH Championship, becoming the first woman to ship a 2020 bracelet.

Norman “abnormality” Michalek actually took 30.5 million into heads-up play against Tamero, who began with 12 million. It looked as if he was primed to win the event, but then a trio of failed bluffs changed all that.

appeared on the turn, Michalek led out for 2,750,000 and Tamero called to see the

Michalek fired the third barrel by moving all in for 5,677,408, Tamero snap-called, and both players tabled their hands.

for air while Tamero turned over

to win the hand and just like that the WSOP.com July tournaments came to an end.