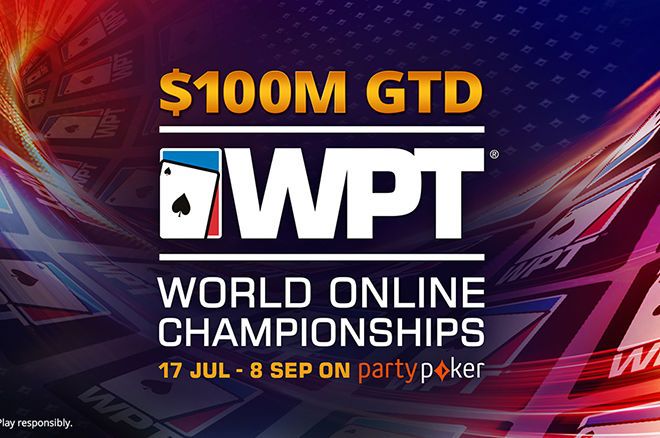 The WPT World Online Championships has already seen three of its huge Championship Events crown their champions and the fourth such event takes place this weekend.

WPT #04 6-Max Championship shuffles up and deals at 8:00 p.m. CEST on August 8, the first of two starting flights. By the time the prize money is ready to be dished out, partypoker and the WPT guarantee at least $3 million will be up for grabs!

The buy-in for this event is $3,200. For that princely sum, you receive a generous helping of 100,000 chips and play a 25-minute clock that starts with blinds of 250/500/65a. Late registration is open until the completion of the ninth-level and players are permitted to re-entry once per starting flight.

It’s great to see such a prestigious tournament have limited re-entries and far less late registration. It really adds to the prestige of such an event.

Day 1B kicks off at the same time but on August 9.

The curtain comes down on both starting flights once the 18th level is done and dusted. Surviving players return to the action at 8:00 p.m. CEST on August 10 for Day 2 and battle it out at the partypoker virtual felt until only seven players remain.

They sit down at the final table at, you guessed it, 8:00 p.m. CEST on August 11 and butt heads until only one man or woman has all the chips in play.

If the 6-Max Championship follows in the footsteps of last week’s 8-Max championship, first place should be worth in excess of $500,000. Gavin Cochrane of the United Kingdom triumphed in the $3,200 buy-in $3 million guaranteed WPT 8-Max Championship earlier this week and saw his lifetime winnings increase by a massive $540,664.

Don’t worry if you don’t fancy putting up $3,200 to play in one of these events because there are Mini and Micro editions that are still jam-packed full of value.

The Mini will set you back $320 and that comes with a $1 million guaranteed prize pool. The details of the Mini are the same as the $3,200 buy-in version except the blinds increase every 20-minutes.

The only thing Micro about the 6-Max Micro Championship is the name because for $33 you’ll be playing for a slice of at least $300,000!

Mike Sexton loves the partnership between partypoker and WPT

Mega Satellites Running Throughout The Week

You don’t have to pay full price for any of these 6-Max Championship events because there are satellites galore running around the clock. Partypoker is guaranteeing hundreds of seats through its awesome Mega Satellites. Head to the partypoker lobby to check them all out.