WSOP 2014: Andoni Larrabe Explains His Play as he Exits in 6th 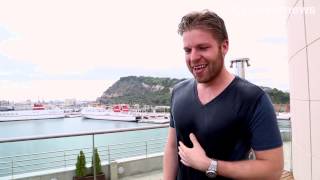 At 22 years of age, Spanish poker pro Andoni Larrabe was the youngest player in the 2014 World Series of Poker Main Event November Nine. The Spaniard, who lives in London, sat fourth in chips at the final table with 22.5 million, though he ultimately finished in sixth place for $1,622,080.

Larrabe, who lists reading, martial arts, meditating, and hanging out with his friends as among his favorite hobbies, now travels the live circuit, but before that he played multi-table tournaments online under the screenname “pollopopeye.” It was under that name that he captured two Spring Championship of Online Poker (SCOOP) titles. The first was in 2012 SCOOP Event #8-H$1,050 No-Limit Hold’em, which earned him $229,212.80, and the other in the 2013 SCOOP Event #17-M $215 NLHE 6-Max Turbo Super KO for $65,926.79.

Impressively, Larrabe stayed in the top 10 end-of-night counts from there on out. On Day 4, he chipped up to 2.195 million (seventh of 291), and then more than doubled that on Day 5 to finish with 5.47 million (fifth of 79). He maintained than position on Day 6, when he finished with 15.28 million, and on Day 7 he used it to navigate his way to the final table, though not without a struggle.

The struggle was because on the bubble he was short on chips. In Level 34 (150,000/300,000/50,000) on Hand #17 of the unofficial final table of 10, Jorryt van Hoof raised to 800,000 from middle position and found a call from two-time bracelet winner Luis Velador in the hijack. Larrabe three-bet shoved all in from the hijack for his last 10 million. Action folded back around to van Hoof who threw his hand into the muck. Velador asked for a count and then went into the tank for about two minutes before announcing a call.

Larrabe was in a dominating position heading to the flop with his pocket aces. The dealer fanned the

on the felt, pairing Velador's king but keeping Larrabe out in front. The

paired the board on the turn, meaning Larrabe needed to dodge a king on the river in order to score the double. The

completed the board and Larrabe secured the double while Velador went on to finish as the final-table bubble boy.