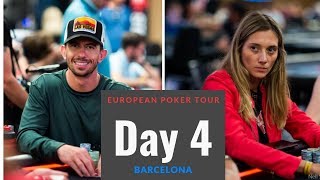 Gaelle Baumann is a poker player from Strasbourg, France currently living in Silema, Malta. Baumann is best known for being the final table bubble girl at the 2012 World Series of Poker Main Event. Baumann has two more WSOP cashes on her record as well as two European Poker Tour money finishes.

Gaelle Baumann was born in 1983 in Strasbourg, France. She started playing poker in 2007 mostly concentrating on cash games. Baumann entered the live tournament stage in 2011 by cashing in the Chilipoker Deepstack Open €550 main Event in Cannes, France for €3,000. Then in 2012 she scored another five live money finishes two of which came in EPT and three in WSOP events, including the 10th place finish at the World Series Main Event.

Before she got into poker Baumann first obtained a university bachelor's degree and then a master's degree. She started playing poker at the age of 24, but it wasn't until 2011 that she entered a major live tournament. Cash games were Baumann's first choice and only after playing for a few years she had finally decided to enter the big tournament scene. The decision seemed to have paid off as Baumann started collecting cashes in some of the biggest poker events, including her biggest achievement, the 2012 WSOP Main Event 10ta place finish.

Baumann first entered the World Series in 2012 and immediately made a name for herself cashing in three tournaments. She first finished in the money in the $2,500 No-Limit Hold'em event collecting more than $5,000 for her 123rd place finish. A few days later Baumann added another cash after placing 15th in the $1,000 No-Limit Hold'em Ladies Championship for almost $8,000. However, the two cashes meant nothing compared to what came after. Baumann entered the $10,000 Main Event along with other 6597 hopefuls and after seven grueling days of play Baumann ended up as the unfortunate final table bubble girl. She was eliminated from the tournament in 10th place and took home almost $600,000 in prize money.

Baumann has two European Poker Tour money finishes on her record both of which she scored in 2012. Her first one came in April at the EPT Grand Final in Monte Carlo when she finished in 75th place in the €10,000 Main Event taking home €15,000 in cash. A few months after, in October Baumann went to Sanremo, Italy and scored an 11th place finish at the EPT Sanremo €2,000 No-Limit Hold'em / Re-Entry event for €12,800.

Aside from her WSOP and EPT cashes, Baumann has another, her first-ever live event money finish. In April, 2011 she placed 14th at the Chilipoker Deepstack Open €550 Main Event for €3,000.

Bauman is sponsored by the French online poker site Winamax.