Casino Poker for Beginners: Sharing Space, or How to Sit at a Poker Table 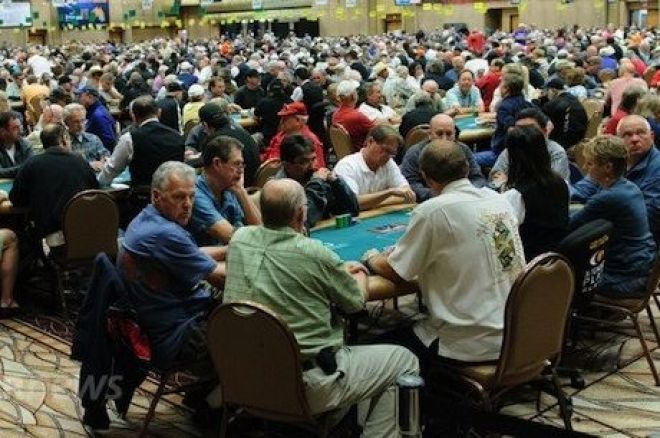 Since in this “Casino Poker for Beginners” series of articles I have lately been talking about types of equipment in use at casino poker tables (chips, buttons, and cards), it seems logical to wrap up that whole line of thought with some tips about the table and chairs.

It’s not that you don’t already know how to sit in a chair, or what a table is for, but there are some points of etiquette and unwritten rules that might be worth knowing about.

Divide, but no need to conquer

Space around a poker table is always tight, and, unfortunately, juvenile disputes over an inch or two of elbow room can spoil an otherwise pleasant game. Here’s how to figure out what territory is rightfully yours.

Some poker rooms run their games with nine players, others with ten. You have to know this before you can deduce where all the players belong. This is usually easy — just count the number of chairs.

For a nine-handed game, the player in Seat 5 should be centered directly in front of the dealer. Seats 1 and 9 are on the dealer’s left and right, respectively. That leaves three seats to divvy up the remaining room between those points of reference.

In ten-handed games, the space between Seat 5 and Seat 6 should be directly in front of the dealer, and again you can kind of eyeball how to divide equitably the remaining space among the three seats that fall between those and Seats 1 and 10.

Sometimes this process is made even easier by the presence of built-in cupholders. If the number of cupholders equals the number of players, the whole process becomes wonderfully simple. Each player just centers his or her body on the assigned cupholder.

Unfortunately — and perplexingly — many casinos do not have a 1-to-1 correspondence between built-in cupholders and seats, which confuses everybody. You may encounter ten seats with nine cupholders, or nine seats with ten cupholders. In those cases, ignore the cupholders and in your mind’s eye divide the space up as you would if there were none.

By the way, if you like having maximum personal space, the two seats on either side of the dealer are the places to be. They’re always my preference for that very reason, unless strategic advantage dictates that the potential for winning more money from another spot needs to trump comfort.

As players enter and leave the game, chairs get jostled and displaced. Sooner or later, the distribution of space will end up lopsided, with one half of the table crowded like sardines, and the other half enjoying elbow room like first-class airline passengers. The dealer should notice and fix this, but if he doesn’t, it’s perfectly fine to ask him to do so.

When the dealer is between hands, just get his attention and say, “When you get a chance, could you please square up the table?” That’s the key phrase: “square up the table.” It’s universal, and it translates to “Scoot the players around as needed to redivide the space more evenly.”

Always let the dealer direct this process. If you try to take it on yourself (“You move to your left a little, you move closer to the dealer”), you sound dictatorial, and will likely encounter pushback from people who don’t like being told what to do.

There is a closely related space issue at the poker table, and that is the space under the table. Your feet have to go somewhere, after all.

Sadly, you will encounter players who are as rude and childish about taking more than their fair share of leg room under the table as they are about elbow room above it. This is harder to combat than the seating arrangement, as the problem will not be apparent to anybody except the two players involved. You really can’t ask the poker room personnel to intervene here without sounding petty. You just have to deal with it, using some combination of charm, assertiveness, and opportunism — just as you would for an airline passenger trying to invade your tiny allocation of space.

The carpet under the table, incidentally, is frequently a disgusting mess. Many players use it as their personal trash can, too lazy to get up and walk a few steps to the real one. Casino staff can’t get in to clean it until after a game breaks up, so the stuff just accumulates. It’s gross. Please don’t be one who contributes to the problem. Similarly, when you leave a game, be considerate and take your cup, glass, or bottle with you. Don’t force an employee or the next player to dispose of it for you.

Speaking of beverages, poker rooms without cupholders built into the table will have portable cupholders that are stabilized by jamming a lip under the rail of the table. Feel free to grab one from an empty seat or table to use for yourself, or move it out of your way if you don’t need it.

Never, never, never have an open beverage container on the poker table without a cupholder. Yes, I know you think you could never be so clumsy as to knock it over. But bad things happen. Other people’s hands move in sudden, unexpected ways, like when trying to catch a runaway chip, flag down a cocktail waitress, express outrage at a bad beat, or pass a phone to show a funny picture. The table tilts when somebody leans on it to stand up or sit down.

As a result, drinks spill. And when they do, it’s a royal mess. Just look at the picture Andrew Teng tweeted from last summer’s WSOP along with the advice “Don't drink wine at the table without a cupholder.”

Cards and chips get wet and have to be cleaned. Towels have to be fetched for the felt. Sometimes they have to shut down that table and move the whole game to another one. Everybody gets tremendously inconvenienced and justifiably annoyed. Don’t ever even take a chance on being the one responsible.

From time to time, you’ll see a player who has an onlooker — most commonly a wife or girlfriend. (It’s not sexist to say so; it’s just a fact. For whatever reason, many more women than men are willing to sit and watch somebody else play.) Every poker room I’ve been in allows this. Still, it’s best to first ask permission from the dealer. He can tell you where to find an extra chair, how to place it so that it’s not taking up other players’ space, and so on.

As the player, you are responsible for your guest’s conduct. He or she must not comment on the action, talk to you in the middle of a hand, peek at other players’ cards, do anything that might help or hurt another player’s chance of winning, or be insulting or obnoxious. Your guest should be made to understand these prohibitions in advance, and you must be willing to take immediate and decisive action should any violation occur.

I guess when you boil it down, all of this stuff about the poker table and the space around it can be summed up like this: be as courteous and respectful of the other players as you want them to be to you.