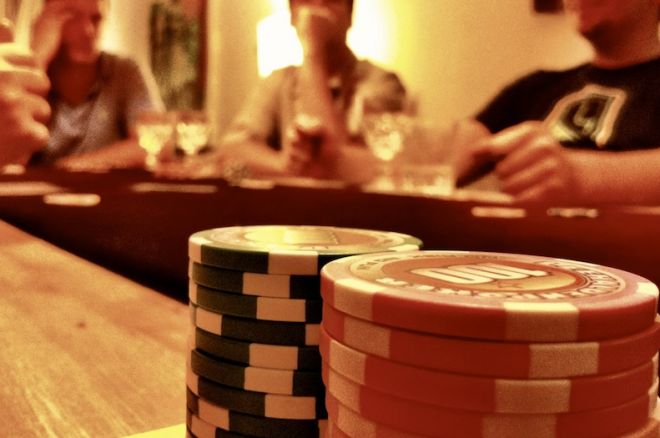 Casino poker has few betting structure variations, with little variation between one casino and another.

The two most common casino structures are limit and no-limit. Limit games have a fixed ante and blind structure and fixed betting limits. No-limit games have fixed blinds, and typically feature a cap on the amount that a player may initially bring to the table. There are also, less commonly, spread-limit games that allow for players to make bets within a designated range. And rarely (at least in hold’em games) there is pot-limit, a variant of no-limit that allows bets for as much as the size of the pot.

But home games often have many more varieties when it comes to betting structure, some of which can create some truly weird options. When you host your own home poker game, you’ll have to decide what structure you will have. Let’s look at some of the options from which you might choose.

I once played in a home game in which the game was seven-card stud, there was a 5-cent ante, and only 5-cent bets were allowed until a pair showed. But the last hand of the night was a “showdown,” played for $5 per player.

As you might imagine, this was an awful structure for the serious player, as it reduced to sheer luck the one hand that determined whether a player won or lost for the night. On the other hand, it made the game a strictly social affair, since it ensured that over time no one, no matter how skilled, won or lost much more than anyone else.

I used to play in another game that allowed players to bet or raise by double whatever the previous bet or raise had been. With a $2 ante, a limit to a bet, and three raises each round, there were some games that had bets of well over $2,000 by the river.

That game was also played without being limited to “table stakes” as is typically used in casinos (a topic Robert Woolley discussed in his latest “Casino Poker for Beginners” installment). You had to call a raise or fold no matter how many chips you had to start the hand, and players were expected to make good on what they owed by the next session. This was a great advantage for the very deep-pocketed players who could literally raise someone out of a pot.

Elsewhere I’ve played in games that were $10/$20/$50 limit, $2-$200 spread limit (talk about a big spread!), “half-pot-limit,” a game with a spread limit of $1-$5 except for the last betting round that was limited to $10, and even a game that was officially played no-limit with a 10-cent ante per player, but with an unwritten but generally accepted rule that you wouldn’t bet or raise by more than $2.

There are other structural adaptations that players in home games sometimes adopt.

In some dealer’s choice home games, the players determine the limit when they call the game, meaning the betting structure can change every hand. Some games allow players to “go light,” meaning that they may call a bet even if they don’t have enough money on the table to do so, then can settle up at before the next hand. Other games actually allow players to reduce the size of their bet after they make it, to accommodate the smaller stack of an opponent, as in: “I bet $15. Oh, you only have $6? Okay, make it $6.”

Selecting a Betting Structure for Your Game

If you are going to play in a game hosted by someone else that features an unusual structure, you’re going to do whatever they do. But if you’re starting your own game, what’s the ideal structure? Will you try to emulate casino poker and stick with common, standard betting structures, or will you introduce something different as in the above examples?

The answer depends on what your goal is. If you want to hone your casino game from the comfort, convenience, and low cost of your home, then just copy the casino structure. That’s easy enough, and also avoids having to explain idiosyncratic structures to those new to your game.

On the other hand, maybe you want a game that has lower limits than the casino because the people you’ll be playing with don’t want to risk as much as they would in one of those games. If that’s the case, you can follow the same structure of the casino game, but have the chips cost less to buy initially.

Their initial stack of $300 chips only costs $30, but the game plays exactly as it does in a casino in all other respects. A $500 swing in chips is really only a $50 swing in cash. Then at the end of the night, when players cash in, they get $0.10 on their $1.00 chips as well. It makes the game run much more smoothly while keeping the stakes much lower than they would be in even the lowest stakes casino game.

One adaptation for a home game that I recommend if you have antes in your game is to have each player ante for the entire table when it is his or her turn to deal. This will save you time and energy trying to make sure every single hand that each player has put in an ante, and it will all even out in the long run.

There are three other hard and fast rules regarding home game betting structures that I strongly recommend to you as well:

By being clear and completely firm, you will avoid the annoying and sometimes game-threatening process of having people argue for what they want. You can always offer players the option to change the structure for the next game you have. Once the game starts, though, stick to the structure you have established and avoid the arguments.