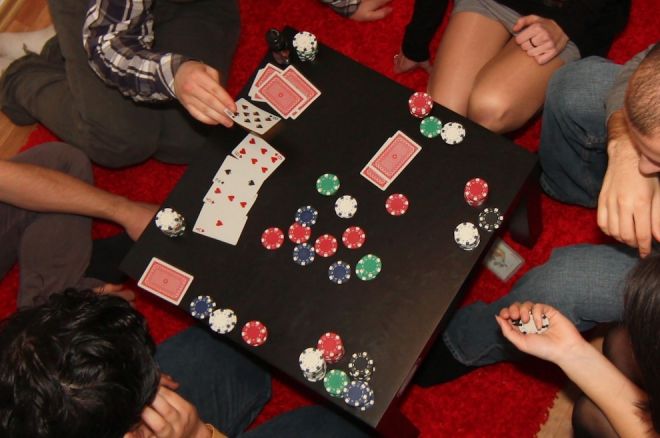 Broadly speaking, there are three ways that a hold’em or Omaha game is generally altered for a dealer’s choice home game:

Today we’ll look first at the common hi-low variations to these flop games. Then in part 2 we’ll look some strategies for getting you the money when you play them.

If you want to be a true home game hero, you must master hi-low games. It is perhaps the most frequent variation of a standard game that you’ll find. If you are fortunate enough to find a home game where most of the players do not understand the basic strategy of the hi-low variation that you are playing, you will be able to win huge amounts regardless of how the cards fall. But first, you have to understand the many permutations that you may find in a home game.

Hi-low can be played simply as “cards speak” with the highest hand and lowest hand splitting the pot. Or it can be played “declare” with the players declaring their intentions. Within each of those broad categories there are many variations.

Games differ on what exactly is the best low hand. Some games determine that straights and flushes do not disqualify a low hand, so

(known as a “wheel” or the “bicycle”) is deemed lowest even if it is single-suited. Meanwhile other games consider that a straight — that is, a terrible low — making

of different suits the lowest hand in games where the ace plays as a low card. Still other games consider the ace to be only a high card, and so would deem

to be the lowest hand.

Some house games follow the “cards speak” rule, but require a low hand to meet certain qualifications, usually that it may not be any worse than an 8-low (although I have played in some home games with a 9-qualifier and even in some nitty games with a 7-qualifier for low). So, for example, in an Omaha Hi-Low game with an 8-qualifier for low game (the variation played in public card rooms), if the lowest hand that anyone can make is

, then there would be no low hand and the highest hand would win the entire pot.

A few home games that I’ve played in require that both the high hand and the low hand must meet certain standards. The most common is probably “Two Pair for High, 8 for low,” but I have played in some games where you couldn’t win high without at least trips. All of these “cards speak” variations end the betting on the hand with the river card, as in a standard high version of the game.

Hi-Low Declare Games and Their Variations

Some dealer’s choice games require players to announce their intentions after the betting round on the river, declaring whether they are competing for the high hand, the low hand, or both the high hand and the low hand. This variation comes with different variations itself.

Some of these “declare” games have a sequential declaration of intent, with players starting either to the left of the dealer or with the last aggressor in the betting action, with each player remaining in the hand, going clockwise, declaring in turn his intent.

As we were discussing last week, sequential declare, starting to the left of the dealer, is a game that gives the dealer an enormous advantage. Because of that, most home games these days have a simultaneous declare, with players declaring their intent by putting one, two, or three chips in their hand, to declare low, high, or both, respectively.

In some home games, if a player declares both ways, he must either win or tie both ways. So if he wins high outright, but ties with another player for low, he wins three-quarters of the pot. But other games require that a player announcing both ways must win both ways outright. If he ties or loses in one direction, he forfeits any share of the pot.

This scenario itself produces one of two different house rules concerning what happens once his hand is declared forfeit. Some home games deem his hand not to count at all — that is, the next-best hands split the pot. But other games require that a player must beat the hand of the forfeited “both ways” player to win. Say, for example, Player A declares hi-low with a

flush, and is up against two players, Player B who declared high with a full house and Player C who declared low with an

. In this variation Player B, the player who declared high with the full house, would win the entire pot, since Player C, who declared low, did not have a low that beat Player A’s hand.

As you can see, there are many different rule variations for the hi-low split variation. I can tell you from experience that it’s crucial for you to understand exactly which rules are in effect when you are playing hi-low in home games.

We’ll look at strategies to exploit these games in my next column.