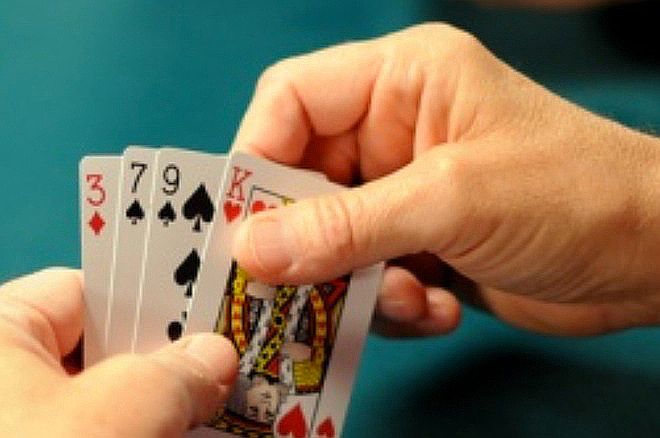 How do you exploit the many variations of hi-low poker that you’ll find in dealer’s choice home games? For this article we’ll look at variations of hold’em and Omaha, especially the non-standard variations that you’re not likely to encounter in a casino.

Casino games typically spread Omaha hi-low with an 8-qualifier for low. It is usually played as a fixed-limit game, although pot-limit and even no-limit games are sometimes spread. I want to look at two different variations instead — hi-low, cards speak with no qualifier, and hi-low declare.

Hi-low, cards speak with no qualifier

Let’s deal with the no qualifier for low first. It’s the easier game for you to exploit (which is why the casino game has a qualifier). If you are playing that the lowest hand and the highest hand split the pot — with no 8-qualifier — then the simple piece of strategy advice you should follow is “Go for low.”

For example, suppose you are playing Omaha hi-low, no qualifier, and are dealt

. Now that’s a great starting high hand. You’ve got the makings of a great full house, flush, or straight. And it may even win unimproved some of the time. But in Omaha hi-low no qualifier, you should fold it (unless you have a strong reason to believe that your remaining opponents are only going to play high hands). Do you see why?

Sure, you can make a huge high — and if the game were high only you’d usually be in the lead preflop with this holding. But in a hi-low no qualifier game, you almost certainly won’t win low with those big cards. Plus, players with a bunch of small cards are more likely to see the flop, and improve their hands — often backing into better highs than you end up with. On the flip side, you will never back into a low that is better than the guys who start with low cards. So avoid the trap of playing one-way high hands.

On the other hand,

with one or two low cards, especially if one is suited, is an excellent starting hand, as it would be in a game with an 8-qualifier because it can make a low. Play them, by all means, and sometimes play them aggressively, to build the pot that you may scoop.

Declare games, on the other hand, are more complicated. The home game is rarely played with a qualifier, so much of the strategy above applies. Going for low is generally the route to follow. But because there is a declare, your opportunity for winning money vastly increases since you don’t need the best hand to win. In fact, if you become an expert at this game, your cards will often not matter at all.

Often you can sneak into half the pot by declaring the opposite of how your opponent is declaring, even when you don’t have much of a hand. But it also can be the case that you win the whole pot by declaring in the same direction as your opponent with a hand you gauge to be stronger than his, rather than settling for half the pot by going in the opposite direction. It is such an important concept that it sometimes makes sense for you to go in one direction, even though your hand in the other direction is much stronger.

Here’s an example of the latter situation. Let’s say that you’re playing in a no-limit dealer’s choice home game with $0.50/$1.00 blinds, and the game called is NL Omaha hi-low declare. You are playing simultaneous declare, with the wheel the best low, and no bet after the declare round. You are also playing that if you declare “both” you must win each outright (i.e., no ties).

Six players, all with stacks of $100, each call the $1 big blind, including you with

, a straightforward-playing opponent bets $20, everyone folds to you, and you call. The turn brings the

, your opponent shoves, and you call all in, making the pot $206. The river is the

. How do you declare?

You could lose high if he has a flush. But based on his straightforward style of play and his betting aggressively when a rainbow flop hit, you are much more likely to scoop the $206 pot when your set of kings beats his expected set of queens. If you declared low, you would only win half the pot, for $103.

As you can see, the declare option adds a level of complexity to any game, providing a potential advantage to the thoughtful poker player.

Should You Play Poker with Maniacs or Find Another Game?