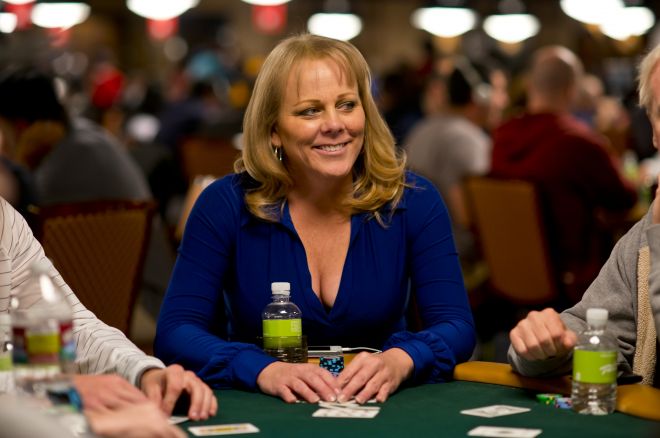 Shirley Rosario is a former Bicycle Casino prop player that began playing tournaments more than years ago. She has several final table finishes in and around the Los Angeles area as well as four World Series of Poker cashes, including a recent fourth-place finish in Event #10: $10,000 Limit Omaha Hi-Low Championship.

Rosario now considers Omaha hi-low her best game. It was her early success and the fact that it was the first game she learned, that has kept her in the game for all these years. She admits to working hard at continuing to improve every day. “I have it in my head that no matter how much I know I always have more to learn. I really put a lot of work into my game.”

Rosario is not only an avid player but she is also active on the business side of the game and runs several websites where she shares stories from the felt and offers strategies on different variants of the game. When asked what advice she would give to someone playing in their first tournament, she said, “I would give them same advice that Steve gave me all those years ago: Play hands that coordinate well together and play hands that have the potential to scoop the pot.”

In Omaha you hold four cards, two of which must be played along with three cards from the five-card board. Coordinated starting hands, have cards that are close in rank and in two suits, this gives the player multiple ways of hitting a flop and increasing the strength of their hand. One of the best starting hands in Omaha hi-low is small suited cards with the ace. This provides the best chance of making the nut low and the nut flush to scoop the pot.

The Importance of Scooping

On first glance scooping the pot seems to be twice as good as splitting the pot. But in reality, scooping the pot is significantly better. On her website, Rosario explains why this is using some simple math. Here is her example:

It’s simple. Omaha hi-low players make their money by scooping the pot. Rosario adds, “If you are playing properly, you are thinking in terms of scooping.”

Rosario thinks new players make the mistake of “drawing to the second nuts too often.” She goes on to say, “That can be very dangerous.” It is common for new players to overplay hands with a potential low and risk getting quartered (splitting half the pot with another player) which could lead to losing chips on the hand even though you won 1/4 of the pot.

Rosario explains, “Omaha is a nuts game.” It is important, especially for new players, to remember that a hand is not made until river. This means you should never put too much value on having the nuts on the flop because it can all change with the turn of a card.

Another big mistake made by new players, especially players coming to the game from no-limit hold’em is bluffing too often. Holding four cards in Omaha means there are more draws and redraws giving players more reasons to call a bet. Additionally, Omaha is a game of action and the pots can become quite large giving players another reason to make call. Understanding your opponents and their tendencies is important in any variant of poker, but even more so in Omaha.

Rosario admits to not always giving credit to some players at her table just because she didn’t like the way they played a certain hand. She saw a big improvement in her game when she “started analyzing everyone’s play and determining what their actual strengths and weaknesses are. Once I starting making those observations, I could figure out how to exploit them. When I made that change, my game went to the next level.”

Rosario is a big believer in the importance of studying the game. “The real key to becoming a good Omaha hi-low player is to be willing to put in the work. You need to want to improve and get better. Poker is going to have its ups and downs and it’s important to remember that it’s all part of the game.”

For more poker advice from the pros, be sure to check out our strategy section.