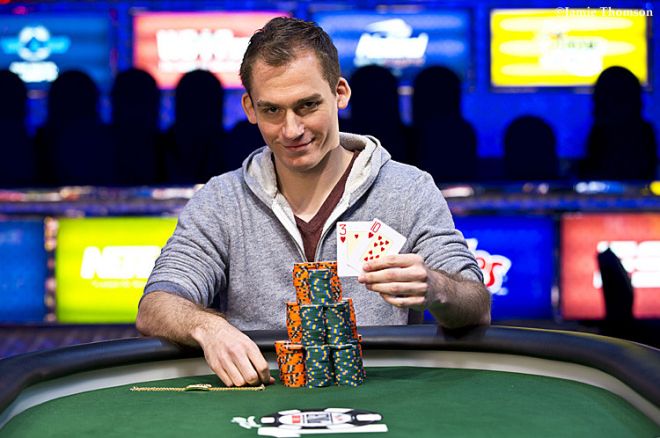 Just a few days before winning his first World Series of Poker gold bracelet in the $1,500 Six-Handed No-Limit Hold’em, Justin Bonomo experienced the heartbreak of a second-place finish in the $10,000 Limit 2-7 Triple Draw Lowball.

One day later, he was back on the triple draw tables again, mixing it up in the first day of the $1,500 Limit 2-7 Triple Draw Lowball event.

The game has become a favorite of some of the best high-stakes players online and is often a part of the mix when it comes to the biggest mixed games in the world, but outside of the WSOP, it can be tough to find a place to play and learn this unusual variant of poker.

PokerNews spoke with Bonomo about some basic triple draw strategy, where to find games, and what kind of things he thinks new players should be thinking about when they decide to play in one for the first time.

PokerNews: What are some of the biggest mistakes beginning players are making in this game?

Justin Bonomo: By the far the biggest mistake that too many players make is that they play too many hands with straight draws. A hand like three-four-five might look good the first time you’re playing triple draw, but eventually you learn that’s a really terrible hand and you almost never want to play that.

PokerNews: What kind of tips you can offer beginning players in terms of starting hands?

Having a deuce is very important in your hand. You don’t always need to start with a deuce, but a hand with a deuce in it is much better. From early position, you generally want to have three cards to a wheel or something like eight-two-three. Once you get to the button, you can start playing some bad hands. Something like eight-deuce-deuce is one of the worst hands I’ll play from the button.

PokerNews: Aggression really rules the day in hold’em. Do you believe a more patient approach should be taken in this game?

I think whether or not you are aggressive is a lot more important in hold’em than it is in triple draw. There are a lot of spots in triple draw where you just call a raise before the draw, where in limit hold’em you would never do that. In this game it’s fine.

One of the reasons why being passive in position is fine, is because being in position is so important that you don’t mind pricing the blinds in. You’ll have so much more information on the end, like we talked about, when you’re in position and they are drawing, you can just pat with your jack and it’s really not a big deal.

PokerNews: What are some of the toughest aspects of this game?

One of the things that is hard to do in triple draw, that generally takes some experience, is knowing when to break your hand on the end. Almost anyone that plays this game will know that a jack is a favorite versus anyone drawing one card, so generally, but technically not always, when someone draws a card and you’re next to act with a jack, you just pat behind.

But what gets really interesting is when you should keep your tens and keep your nines.

One spot that’s really hard to play in this game is when you bet with one draw left and someone raises you and you have something like nine-eight or a bad ten. It’s really hard to pat those hands. But sometimes you just know your opponent and you can pat with a nine there. Honestly, I can’t give you any kind of secret for how to do that really, it’s just something you get a feel for if you play the game more.

PokerNews: Triple draw isn’t exactly spread in every casino across the country. Where can players get that valuable experience?

Triple draw is spread in a lot of the mixed games, so if you play a lot of mixed games there’s a good chance you’ll be playing triple draw. Also, just online, I’ve played a lot on PokerStars. If you really want to find the game, you can.