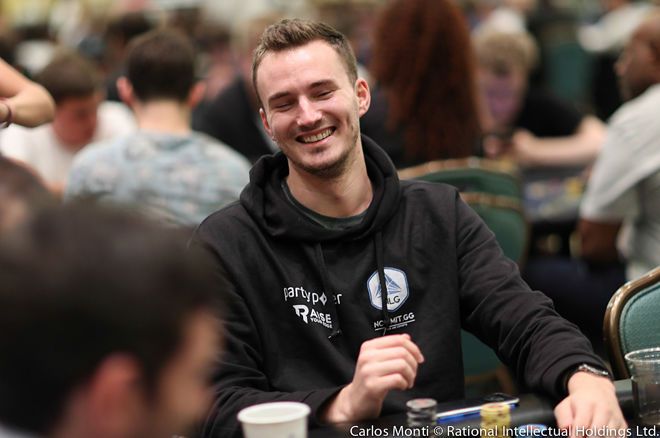 Hey folks. I'm back with another "Teachable Moment from Twitch." This time we have a $2/$5 cash game hand that German pro Steffen Sontheimer played online and streamed on the No Limit Gaming Group's Twitch channel.

The interesting thing about this hand is how afterwards Sontheimer stopped for a short break in the middle of his session to take a deep dive into his play over the previous hour or so. Most players I know wait until the end of the session or the next day to study interesting spots, if they do so at all. It was cool to see how one of the game's top players works study time into his sessions.

. Villain opens to $12.50 from the hijack and calls Sontheimer's three-bet to $42.50. The blinds fold and the Villain calls, so it's heads-up to the flop.

and the hijack checks. Sontheimer bets $25 into the pot of $92, Villain check-raises to $80, and Sontheimer calls. The turn is the

. At this point, Sontheimer explains how that turn card favors him.

"The deuce is a very bad card for him because he has one combination of deuces instead of three now, if he flats deuces in the first place," says Sontheimer. "His 5-6 is counterfeited and none of his bluffs have turned into a value hand, so he mostly has random spade and straight draws or busted backdoor diamond draws. Against this range, I prefer to check back my aces and bet this hand because I don't expect people to check raise too many sevens and nines, etc."

After his opponent checks, Sontheimer bets $62 into $252. Villain then shoves in response, putting Sontheimer to a decision for the $395 he has behind. He then verbalizes a thought process that I rarely witness in the games I play.

"Okay, he might have pocket nines and pocket tens, but you know what? I don't care," he begins. "If he does that with nines and tens, he's dead to two outs running into all my kings, queens, and jacks that I play the same way. In reality, is he ever playing a boat this way? On the flop, he represented sets and two pair as his value hands. None of those would ever play like that because if you have a boat, you want me to hit my flush."

Here, not only is Sontheimer thinking about the hand he holds, he is evaluating Villain's strategy against his entire range.

Most of us would be thinking about whether or not we are good often enough here with this specific hand. If we call, we lose to his overpairs. If we fold, we get bluffed by his draws.

Sontheimer doesn't play this guessing game. He calls both with hands like kings, queens, and jacks that beat Villain's overpairs, and also fills out his range with weaker hands like this one in order to prevent himself from being bluffed too often. This holistic approach removes the need for "soul reading" and solidifies his strategy against a wide range of opponent counter-strategies. In this case, he called and his hand held against

Even more impressive, Sontheimer goes on to think about what Villain should have done in the hand.

"What you can do is size down on that turn," he explains. "You can size down with your sixes and your fives to make sure that I still have to call my flush draws always. You can sometimes check-raise your tens there for value if you raise small and then you can kinda buy your next card with something like 8-7s as well.

By analyzing not only his hand, but also his entire range and that of his opponent as well, Sontheimer gets more study material out of a single hand played than most of us get out of an entire hour of next-day study time. And he does it all during a short break in the middle of his session!

If you find yourself cramped for study time, consider trying his holistic approach to see if you too can get more bang for your study buck.