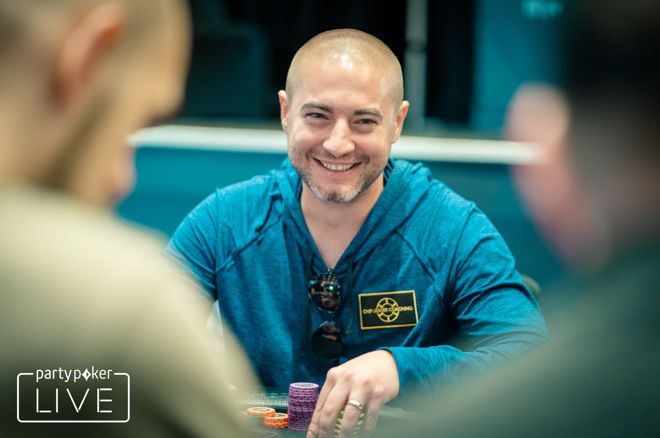 Ed. note: In a new series here in the PokerNews Strategy section, the coaches at Chip Leader Coaching will be analyzing hands submitted by readers. Have a hand you would like reviewed? See the note at the bottom of the article.

In this first installment, CLC founder and coach Chance Kornuth shares his thoughts on a tournament hand involving an attempted triple-barrel bluff.

The following hand was supplied by PokerNews’ own Mo Nuwwarah. The hand comes from the $1,700 buy-in Main Event at World Series of Poker Circuit Hammond from a few weeks ago. Here’s how Mo describes it:

from the hijack to 7,000 and big blind calls. He is a player I'd classify as an average regular in the Midwest 1Ks. He is aware I am very aggressive from a previous final table we've played together. He has about 115,000 to start the hand, and I cover him by around 150,000.

for the flopped nuts.

In this particular hand we raise J-9 from the hijack and the big blind calls.

This is someone that we have history with who knows that we’re very aggressive, and for that reason I typically would just be putting this into my checking range, instead of bet-bet-shoving.

If we want to have our bet-bet-shoves as a bluff, we don’t want to have a jack in our hand, because then our opponent is less likely to have hands like J-9, J-T, and Q-J that can call-call-fold. Having a jack in our bluffing range is actually not ideal. I think a hand like 8-9 is probably best to have when bet-bet-shoving here.

Our flop betting range should basically be K-Q+ here, as well as all two-pair hands, all straights, all sets, and A-K. With those hands we could fire twice or three times on, as well as with 8-9.

But let’s talk about the actual line we took with

, which is really interesting for a few reasons.

For one, we block some of their K-J and J-8 hands, which means there are fewer straight combos for them. That allows us to be more confident that they have a lot fewer traps here.

But again, against an opponent who knows that we are aggressive, we probably don’t ever want to take this line. It’s going to better just to check behind on the flop, check or call a bet on the turn, and then evaluate after that.

That being said, once you bet the flop I actually do like betting again on the turn and then shoving the river. That line is probably ultimately making you a similar amount of chips as is checking the flop, although it is super-high variance and (in truth) super unnecessary.

Once we bet the flop, we can get called by T-8, K-T, A-T, and maybe some Q-x hands that fold by the river. So if I do bet the flop, I definitely don’t mind tripling off.

Again, however, if we’re betting the flop and then tripling off this combo, then we’re just going to have so many three-barrel bluffs here that our opponent can just basically call-call-call and exploit us pretty easily. Recognizing that, I’d recommend the more cautious line.

Submit Your Own Hand for Review

Have a hand you would like the pros at Chip Leader Coaching to analyze? Post a summary of the hand including relevant details in a comment below, and we’ll pick the best for the next CLC hand review.

Chance Kornuth is the founder and lead instructor of Chip Leader Coaching, which is the premier training program for mid-stakes tourney players who want to take their poker career to the next level. He has 2 WSOP Bracelets, a Bellagio Cup Victory, an Aussie Millions High Roller Championship, and over $6 million in career winnings. He is legendary for his aggressive style of play and ability to decode players physical tells. For more, visit CLC's website and follow the coaches on Twitter @ChipLDR.

Facing a Check-Raise with Top Pair: GTO vs. Exploitative Approaches