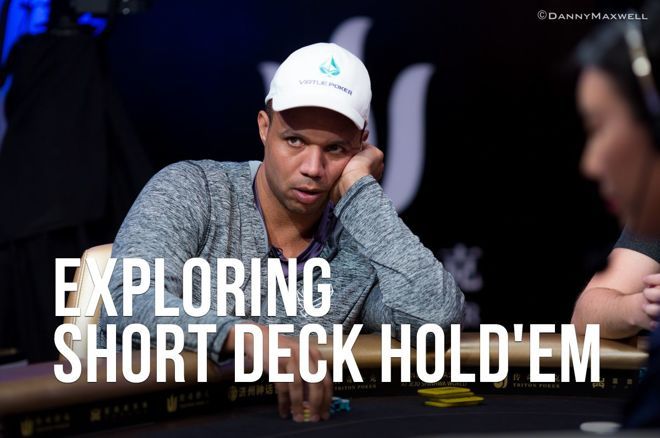 It's time for Part 7 in PokerNews' series looking into the strategy behind short deck hold'em (a.k.a. "six-plus hold'em"). With many of the fundamentals out of the way (see Parts 1-5), we'll again continue to examine some interesting hands that have been played by top professionals.

Perhaps no stretch of play captured on video illustrated more of the intricacies and depth of short deck than the lengthy heads-up match between "Jungleman" Dan Cates and none other than the legendary Phil Ivey at Triton Super High Roller Series Montenegro last May.

The two tangled at the end of the HK$250,000 Short Deck event, with Ivey starting out at quite a deficit before turning the tables and taking the victory to claim the HK$4,749,200 first prize worth a bit over $600K USD and about $200K more than what Cates got for finishing runner-up.

Throughout the match, Ivey showcased his immense skill in the short deck format, likely gained from long hours of cash game play in the highest stakes games in Asia. In one big hand, Ivey made a play that caught the commentators by surprise, and we'll see if we can work out what he was thinking.

Each player began the hand with just over 9 million in chips at 100,000 antes and 200,000 on the button, so the players were quite deep even though the match had already been going for a bit. Cates had been playing rivers very aggressively, bluffing with large overbets in multiple spots.

After Ivey limped from button, Cates raised to 700,000 with

and Ivey came along with

Each player checked on the

arrived on the turn. Cates thought for almost a minute and then fired in 1,075,000. Ivey took his own thinking time and then shoved for about 8.5 million effective.

Cates put his head in his hand but had to throw his hand away, sending the pot and a more firm chip lead over to Ivey.

Cates came out of the gate firing here, which fit what appeared to be his overall strategy against Ivey: push the action. He opens

for a raise, which many players appear to just call as a default in late position in short deck.

When Ivey gives him action, he has to figure he's behind more often than not as

is on the weaker side in short deck. Remember, while the hand is pretty, suited cards aren't as helpful in short deck because it's difficult to make flushes.

In regular hold'em, second pair is a hand many players like to mix into their checking range, as you need some hands you can call turn bets with after checking the flop, but you also don't want to check too many top pairs back as you're potentially missing value. It appears the concept may hold true in short deck as well as both Cates and Ivey flop second pair and check.

Both players improve on the turn, Ivey more so with two pair. Cates fires out a large bet of just under the size of the pot, 1,075,000 into 1.4 million, leaving about 7.4 million back.

At this point, the commentators clearly expected a call. Instead, Ivey rips all in for Cates' remaining chips, about three times the size of the pot.

"Wow!" one of the commentators exclaims right away, indicating Ivey may be deviating from "standard" play.

Indeed, I expect calling would likely be the default for many players in this spot. But this is Phil Ivey we're talking about, so there's almost certainly going to be merit in the shove.

For one thing, recall a concept Jason Somerville outlined in Part 5 of this series: getting opponents to fold their equity with large bets and overbets is a prime source of profit in short deck. That's one thing Ivey is certainly accomplishing by shoving for over the pot.

He has a weak two pair, a very vulnerable hand. Any hand with eight or more outs has at least 25 percent equity against him.

Furthermore, what hands could Jungleman have that beat him? Top set and queens up have Ivey in rough shape, but he has to expect Cates would have bet those hands on the flop. King-jack is a favorite against many of Ivey's holdings, so that likely merits a flop bet as well. Weaker straights come from

and Ivey has to wonder if Cates would raise hands that weak, particularly the latter.

If Ivey's wrong about that and Cates does show up with a straight, Ivey still has about a 1 in 8 chance to get there on the river.

Finally, and perhaps of most importance, Cates has been putting Ivey in some very tough call-or-fold river spots.

Consider this board and note that there are very few cards Ivey wants to see on the river besides one that improves his hand to a full house. Because of the nature of short deck, every river card that doesn't pair the board here makes a straight possible. There's also a flush draw out there, though that's less of a concern in short deck compared to other games.

If Ivey just calls as the announcers expect, he'll be left playing a guessing game on the river against a player highly capable of shoving on him with air, and doing so without a hand that's really all that close to being nutted. A good way to avoid that altogether is to just jam himself, giving him a pretty good chance of scooping a sizable pot now or at least realizing his equity on the river in the event he's beat.

The shove worked, and Ivey grabbed the lead in the match, finishing off Cates later in that same level to claim his first victory in over three years.

Facing a Check-Raise with Top Pair: GTO vs. Exploitative Approaches