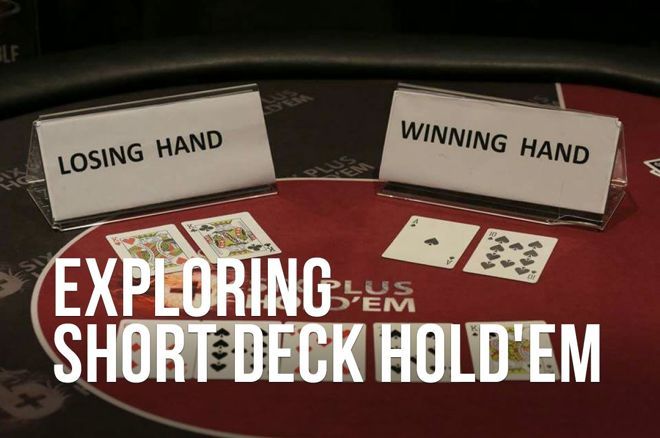 Last year, my friend and old PokerNews colleague Rich Ryan stayed with me for a few days over the summer so he could fire the $1,500 Millionaire Maker at the World Series of Poker.

While discussing strategy and talking over some hand histories, Rich lamented the current state of the no-limit hold'em metagame. It had become a bit stale, he thought, and it was hard to disagree.

"Poker's become a dance where everyone knows the moves," he lamented.

Indeed, in many ways the mechanics of the game have become as predictable dancing to the cha cha slide. Player raises, big blind calls. Big blind checks, player bets these flops but not those flops. Double-barrels these turns but not those turns. Slide to the left. slide to the right. One hop now ya'll.

Once the Cadillac of poker, hold'em has become a beige Volvo. Perfectly fine for getting you place to place, but not something that's going to excite the driver or turn the heads of anyone who happens to be watching.

Enter short deck, a.k.a. "six-plus hold'em." The format, growing in popularity since it first entered the poker public's consciousness a few years ago, brings a brand new beat. No longer does everyone know the moves. Quite the opposite, in fact, as strategies and concepts are still in the early stages of being explored. This new and crazy beat has changed the game.

As short deck continues to proliferate, more and more poker players across the world will get the chance to play, be it in a home game, in live poker rooms, or online. In this series, PokerNews will seek to flesh out some of the basics and concepts behind the game, so you can learn the first couple of moves to this brand new dance.

Today, we'll start with the basics.

The mechanics of short deck as it relates to the action-by-action playing of the game are simple enough. In fact, anyone familiar with hold'em — most likely, nearly all of the readers of this site — will have no problem quickly grasping short deck's basics.

Everyone is dealt two cards, except they're not coming out of a standard deck. Every card two through five is removed, so the deck is 36 cards deep instead of 52. Players make hands using one or both of their hole cards and the five community cards that come from a flop, turn, and river.

Hand rankings change slightly due to the nature of the deck changing the chances of different hands being made. No set of rules has become 100 percent the standard, but it's pretty much accepted that flushes rank above full houses. Some rule sets also have three of a kind beating straights, while others stick to the hold'em rankings that elevate straights above trips.

Blind and ante structures also vary in short deck. While some games have used blinds or blinds with an ante, the format that's currently gaining the most popularity at the time of writing involves no blinds and every player contributing a set ante, with the player on the button putting in a double ante. Play then starts to the left of the button, with each player either having the option to call by putting in a second ante, folding, or raising.

Subsequent streets proceed as in hold'em, starting on the dealer's left with a check or bet option.

Few players enjoy learning a new dance more than Jason Somerville. The Run It Up patriarch has already made short deck a part of his Run it Up Reno tournament series, and he's among the game's early proponents, having gone on the record calling it "the next big thing" in poker.

Somerville likens the action produced by short deck to pot-limit Omaha when discussing why it can be such a game-changer for the future of poker.

"It's so much fun because of the action," he said. "That's really what it comes down to."

"It's just so much action because all the hands run so close preflop, especially playing with the ante structure, that the reason people are attracted to it is that you can play a lot of hands. That's always a lot of fun. There's not a lot of folding. Especially in the high-stakes games, there's a lot of limping before the flop, and so it creates a ton of fun, and that's why it's been so popular."

Somerville's been getting a feel for short deck over the past year or so. He voiced his opinion on some of the disagreements running through the community on the best way to play the game.

As for straight versus trips, Somerville favors keeping straights superior. The reason, he outlined, is playability of the game and encouraging action.

The most common counterargument is that it's easier to make a straight than trips. However, it's also easier in short deck to make a pair than to go unimproved and finish with only a high card, Somerville pointed out. No pair doesn't beat one pair, so rarity shouldn't be the determining factor.

"From a fun or playability point of view, if you have seven-eight on a six-nine-ten board, in short deck when you're playing straight is worse than trips, you're drawing dead to a set," he said. "That's not very fun. You flop a straight and the guy has ten-ten and you're just dead. So it really creates very un-fun games."

Somerville said he also enjoys the antes with a button double-ante structure. It punishes tight play and encourages players to open things up and play more hands. That keeps the pots big and creates more action for everyone, which is the idea behind short deck itself.

If you're looking to host your own short deck game, you can set the music to whatever pace you want, but those are the settings Somerville and many others believe best to create an environment with maximum fun.

Whatever rules you decide on, the game of short deck is simple enough on the surface to learn. It's when you really start to dive in that things get interesting, so stay tuned for further entries in this series as PokerNews explores this exciting game.