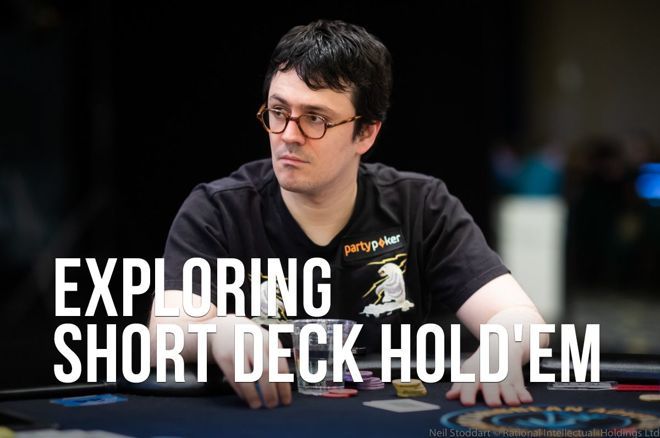 When it comes to learning how to play Texas hold'em, the most basic lessons begin at square one: the starting hands.

Two aces, good. Seven-deuce offsuit, bad. Of course, it isn't quite that simple, as there are times when hands like ace-king offsuit are far superior to something like nine-eight suited, and there are times when the latter becomes just as playable in certain situations.

Short deck strategy is still in its early stages, as the community as a whole is certainly very far from reaching the level of understanding that's been attained in regular hold'em. Seeking to outline some basic tenets of the preflop game, PokerNews spoke with renowned poker theory expert Isaac Haxton on the subject.

Haxton faced plenty of preflop decision-making as he navigated to a first-place finish in the Poker Masters $10,000 Short Deck event last fall for $176,000, overcoming a field of 55 entries. He shared some of the lessons he learned in his first foray into the game.

For starters, Haxton says, "It's still hold'em." As in, you're still largely looking for the same things: big pairs and cards are good, small unsuited combos not so much.

However, there are some key differences. As PokerNews outlined in part two of this series, preflop equities run much closer than in regular hold'em. Pocket aces, while still the preferred hand in an all-in situation, aren't nearly as big of a favorite against a decent connecting hand —

Pairs in general, Haxton notes, go down in value in short deck relative to regular hold'em, particularly pairs lower than kings. Meanwhile connected hands like jack-ten go up in value because the chances of making two pair, trips and straights to crack big pairs are much greater.

Since making flushes is harder, suited hands go down in value.

It's also important to keep in mind that small suited connectors are not nearly as attractive as they may look.

Now that you know a little bit about what to look for in a starting hand, the next question is, what are you going to do when you decide to play a hand?

In hold'em, conventional wisdom has dictated that it's best to come in for a raise when first into the pot, as stealing the blinds occasionally is an essential part of a winning strategy.

Short deck changes the equation a bit because players behind you are much less likely to simply let you win the pot without contest with a preflop raise. Because equities are close, many hands are playable. Furthermore, the anteing structure most frequently used in short deck right now — everyone antes preflop, the button antes double, and nobody posts a blind — gives everyone a very attractive price to at least call the initial double ante.

Given all this, limping in is much more frequent in short deck compared to regular hold'em. It's more mathematically sound, and players seem to understand this as the short deck event at Poker Masters featured plenty of limping.

Haxton believes this will be a theme even as short deck strategy continues to evolve.

"If you're first to act in a seven-handed game, there's eight antes out there and you've got to put one more in the pot to try to see a flop," he says. "You don't have to win that hand very often for it to be worth investing that one ante. So I think the structure just encourages a lot of multi-way pots. I think that's part of why it's been so popular."

What if you decide you want to raise? You like your hand and want to try to build the pot. How should your sizing look?

Two to three times the blind is usually standard in regular hold'em, but Haxton says think bigger in short deck.

"In general, raise sizing is going to be bigger than you're used to from no-limit," he says. "A lot of pot-sized and bigger raises, a lot of shoving for many times the pot. It makes a lot of sense given how equities work."

Indeed, the Poker Masters event saw players frequently shoving for some 30 antes with hands like

, knowing even if they were called they'd have pretty decent equity in almost any case. If they weren't called, they'd sweep up a pile of antes and significantly increase their stacks.

"You have to be pretty deep in short deck for non-all-in three-bets to become a big factor," Haxton explains. "A lot of cash games play 100 antes deep. Say you have a couple of limps and somebody opens to 10-14 antes. You aren't really going to three-bet them to 35 and fold to a jam. You kind of have to play 200 antes deep before folding becomes a realistic line."

If you're playing short deck, prepare for multi-way, single-raised and limped pots to be the norm. Many players will be looking to see the flop for cheap, and math will dictate they're correct to do so.

"I think that's what playing the game well is going to look like," Haxton says. "In some ways, it's a more interesting, harder-to-solve form of poker with multiple people seeing the flop. I think people are enjoying that about the game and I think it's a genuine piece of the strategy that's going to persist."