Your Ultimate Guide to Short Deck Hold'em at GGPoker 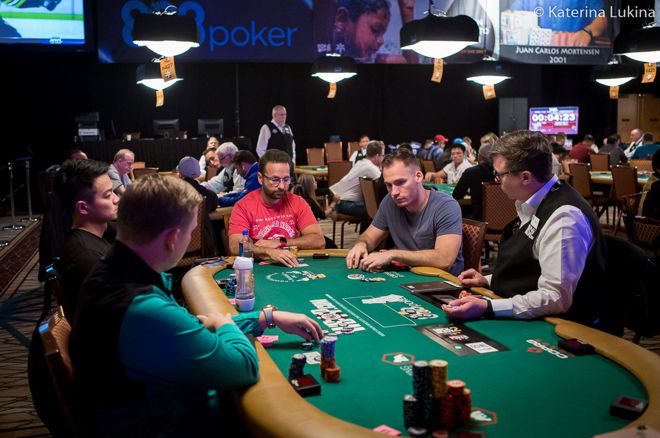 Short Deck Hold’em, often called 6+ Hold’em or simply Short Deck, is the game of choice in the highest stakes tournaments and cash games. The game looks extremely similar to traditional hold’em, but a handful of unique differences make Short Deck an action-inducing game like no other.

The Short Deck tables are always bustling at GGPoker with hundreds of players grinding these exciting cash games at any one time. Read this free strategy guide before you join them at the tables.

The mechanics of Short Deck are extremely similar to standard hold’em in that everyone receives two hole cards. The same five community cards are present and correct, but the game is played with a stripped deck of 36-cards, hence the game’s name.

All cards from deuces through fives are removed, which in turn alters the hand rankings. Hand rankings differ slightly depending on where you play Short Deck, but it is generally accepted that flushes rank about full houses, while three of a kind trumps a straight.

The blind and ante structures also differ from traditional hold’em games. Again, rules have some variation, but what appears to be the industry standard is an ante-only format. Everyone pays an ante before receiving their hole cards with the player on the button paying a double ante. Players then have the option of calling the button ante, raising, or folding.

This ante only format creates pots that are much larger preflop than the equivalent hold’em cash game.

For example, in a $0.50/$1 no-limit hold’em cash game there is typically $1.50 in the pot before the first round of betting: a $0.50 small blind and a $1 big blind. In the same stakes six-max Short Deck game there is $7 in the pot, five $1 antes and a $2 double ante on the button. This, in turn, generates more as the pots are larger and players want to win more money.

There’s even more action on the GGPoker Short Deck tables because they are all played five-handed.

We’ve gone over the rules, now let’s look at playing Short Deck preflop. Before we continue, it’s worth noting that aces can be high or low in Short Deck, so A-6-7-8-9 is the lowest straight you can make.

You’ll be dealt the powerhouse hand that is pocket aces almost twice as often in Short Deck than regular hold’em, once in every 105 hands. Other pairs come around more often too, as does ace-king, and being dealt two Broadway cards.

Hand equities run closer in Short Deck too. A hand such as

approximately 78 per cent of the time in a traditional hold’em game, but this figure is between 63-67 per cent in Short Deck, depending on the rule variations.

Read about these GGPoker special features

Our very own Mo Muwwarah spoke to Team partypoker pro Isaac Haxton last year and Haxton revealed: “It’s still hold’em.” Haxton also revealed pairs lower than a king tend to go down in value, but connected hands like jack-ten increase in value because of the chance to make two pairs and straights to crack big pairs.

Limping is far more common on Short Deck because you rarely win the pot with a single preflop raise. Also, as you only have to pay the price of one more ante to see a flop, it makes more hands playable. It also creates far more multi-way pots, which is part of the reason why Short Deck is so popular at GGPoker.

When it comes to preflop raising you should be making those raises larger. Two-to-three big blinds tend to be the norm in regular hold’em. Haxton revealed his observations.

“In general, raise sizing is going to be bigger than your used to from no-limit. A lot of pot-sized and bigger raises, a lot of shoving for many times the pot. It makes a lot of sense given how the equities work.”

Three-bets tend to be all-in shoves too. This is because you need to be very deep in order for them to become a big factor. Most cash games play 100 antes deep so you’re going to be priced in to call a shove a lot of the time. With 200 antes, you have more room to make that fold.

Get Your GGPoker Career Off to a Flying Start

There’s less continuation betting in Short Deck because fewer pots have seen a preflop raise; there are more limped pots. That said, the postflop game is essentially the same as traditional hold’em.

Your main issue after the flop is recalculating the different odds and probabilities, along with accurately putting your opponents on a hand or range of hands.

It pays to put in some study for multi-way pots because you’ll be playing plenty of them. Take notes on the sort of hands that players showdown so you have a picture of their limping habits. Knowing who has the strongest limping range in a three-way pot on a

board makes the difference between giving up the hand or getting your hands on the cash.

GGPoker has Short Deck cash games in a wide variety of stakes. These games use the Chinese currency to play them, so make sure you check a currency converter before sitting down at them. You don’t want to be playing way out of the limits of your bankroll!