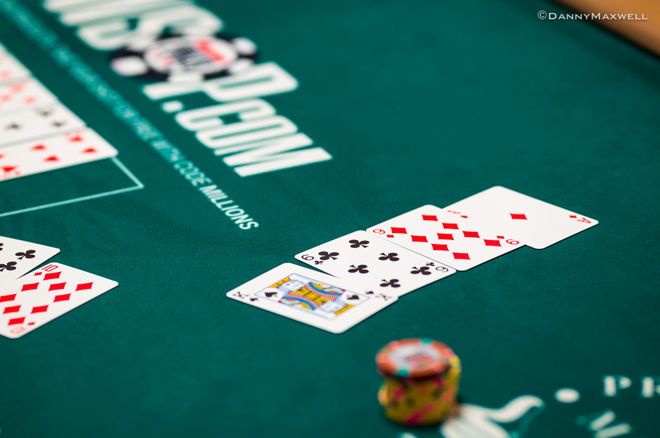 Omaha hold'em, often called simply Omaha, is an exciting poker game that is strikingly similar to Texas hold'em, although it does have a number of differences to set it apart.

Games of this type are referred to as pot-limit Omaha, abbreviated as PLO poker.

The first major difference you'll instantly be aware of when playing PLO poker instead of hold'em is that each player is dealt exactly four hole cards instead of two.

However, players don't use all four hole cards to make a hand because they can only use two of them.

In fact, players must use exactly two of their hole cards along with three of the community cards to make a five-card poker hand.

In a pot limit Omaha game, the player does not hold a flush despite holding the

Neither does the player have a Broadway straight.

The player actually only has a pair of kings with an ace-kicker.

This may seem a little confusing when you first sit in a PLO game, but it quickly becomes second nature. You just need to play enough Omaha hands to get used to this and to learn how to read the board correctly.

What is Pot-Limit Omaha?

To know more about the basics of the game, you can visit these pages:

Besides starting with four hole cards rather than two, there are a few more differences between Texas hold'em and Omaha games.

One such difference is that preflop hands in pot-limit Omaha run much closer in terms of poker equity than they do in hold'em.

This closeness in preflop hand strength is one factor leading to players playing more hands, seeing more flops, and PLO being more of a drawing game than hold'em is.

This creates larger pots with the majority of the chips often going into the pot after the flop is dealt.

Another key difference is the fact you generally need a stronger hand at showdown to win at pot-limit Omaha than you would in a Texas hold'em game.

In hold'em, it is not uncommon to win a hand with two pair or even a single pair. In Omaha poker, these hands are rarely the best by the river.

The other significant difference between pot-limit Omaha and no-limit Texas hold'em is the betting structure.

In no-limit hold'em, players can bet any amount they wish, up to the size of their stack.

Omaha poker, however, is "pot-limit," meaning players can only bet the total size of the pot including their call.

Need help to understand the concept of pot-limit games? Let's look at another example.

Imagine a PLO poker hand that is contested between two players.

When it is the second player's turn to act, that player can only bet a maximum of $400.

Betting is easier when you play online

While this can be confusing until you are used to playing the game regularly, betting in pot limit Omaha poker is a lot easier if you play online.

When playing Omaha games online you can simply click the "pot" button and the software figures out the correct amount for you.

Need help? Ask the Dealer to count the chips for you

In a live pot limit Omaha game, if you announce "pot" before betting the size of the pot, the dealer will assist with the calculations.

Pot-limit Omaha poker is a complex game, which makes it difficult to come up with the perfect strategy for playing it.

There are a number of pointers that you can remember that can form the basis for a solid pot limit Omaha strategy:

Quick Strategy Tips to Be a Good Omaha Player

While Omaha might not be as "straightforward" as Texas hold'em, these are some simple strategy tips that will help you get better results at the table — faster.

Go through this list of essential Omaha poker tips, memorise them, and you'll know what to do to become a better player right.

Know what hands to play / fold. The nature of PLO requires you to be smart and take a holistic approach to the cards that compose your starting hand.

Avoid the danglers, for example.

Whenever you decide to play a hand with a 'dangler' (a card that doesn't connect to any of the other cards in your four-card starting hand), you force yourself to play with three cards.

Why is this bad, you ask?

You might think this isn't too bad, especially if the other three cards that compose your hand seem promising.

Think about your opponents, for a moment.

If they go for a 'more conservative' pot limit Omaha poker strategy, they stay in the hand only if they can still play with all four cards, not just three.

By entering the hand with three cards, you are giving others an advantage they shouldn't have.

READ ALSO: You Play Too Loose in These 3 Preflop PLO Situations

Don't play too many hands. Note: this is not only the most important Omaha poker tip you can ever learn — it is a lesson that you should keep for all the poker games you'll ever play in your life.

Once you realize that Omaha poker games have good hands (a few) and bad hands (a lot more), you need to accept the consequences of that.

Select the hands you play and go only for the premium hands.

Omaha, like hold'em, is a game where you need to know when it's time to play and when it's best to fold your cards.

Be patient. Wait until your starting hand fits the range you should play, use the information you have to read your opponents and decide whether you should continue or not.

Know how to read the board and assess the other players' hand strength. Unless you are so good at detecting poker tells that the police use you as a real-life lie detector…be careful.

Omaha poker can become a very expensive game and one where the players don't bluff as much as in hold'em.

If a large bet comes on the board, you better save your hero call for another poker game and fold. Most Omaha players use big bets to protect their hand. Calling their alleged bluffs can be very, very costly.

Understand How Odds and Outs Work. The concepts of odds, outs, and equity are important in all poker games, including pot-limit Omaha.

If you struggle to do the math and understand how everything works, you better rely on the usual beginner's formula.

Start with a free odds calculator and continue using the tool until you learn how to do the calculations in your head.

Three Things NOT to Do in Pot Limit Omaha Poker

With more than $100,000 in PLO tournament winnings and an 11th-place finish in a PLO event at the World Series of Poker, Saliba is known (and respected) to be a good Omaha poker player — perhaps even the best one in the 888poker team.

In her conversation with Michelle, Saliba touched on the three most common mistakes she sees poker players make at the table when they play Omaha poker.

Don't Freak Out When Short Stacked

"When you have seven or 10 big blinds (BB) you are not that short. You still have a lot of room to pick your spot and to pick your right hand," Saliba explains.

Confirming one of the Omaha tips we shared earlier, patience is the key. "You need to be very patient. I see too many people just going crazy [because] they think they are super-short."

"Poker is about survival," Saliba continues. "Tournaments are about survival. PLO is like that, too — just perhaps at another level. You need to learn to manage risks all the time.."

Don't Play a Lot of Hands

If you thought our list of Omaha strategy tips was the only one mentioning the sheer volume of hands beginners play — think again.

"You have four cards," Saliba explains. "I know they look pretty — but this is the same for your opponent."

If you plan on staying in the hand and invest your stack, "you really need to have strong high cards, high pairs, drawing for the nuts."

"You shouldn't be playing multi-way pots with weak draws or [small] pairs. You have to select the hands you play."

It's no secret that the majority of players that get into Pot Limit Omaha poker come from Texas hold'em.

According to Saliba, many of them make one common mistake: "they think Omaha poker is simply hold'em with four cards.

"There are a lot of differences between the two games in terms of hands, of strength, theory, approaches, and more."

"There are so many things that before you start playing PLO you should stop and study the game. Omaha is not as simple as people think."

The very best Omaha poker players in the world play a wide range of poker hands, but those new to the game should stick to hands that are stronger and therefore easier to play.

The best PLO poker starting hands are those that have a big pair in them and some connectedness that allows them to improve post-flop.

Ideally, your hands will be what is known as "double-suited," meaning you have the chance to flop two different flush draws.

is a nice double-suited starting hand with a big pair.

Flopping a set with this hand means you'll always have top set, while any flush draw will be to the nuts.

Other strong hands containing a pair of aces include

, while double-suited run-down holdings such as

SEE ALSO: You Can't Play Them All: Evaluating Starting Hands in Pot-Limit Omaha

As you have probably gathered, pot-limit Omaha poker is an exciting game that creates big pots, and sees players make big hands regularly.

As great as this is, the big thing you need to consider is playing Omaha poker requires a larger bankroll than hold'em variants mostly because of the closeness in the strength of hands both preflop and postflop.

It's common to not have more than 60% equity on the flop against a single opponent, which can and does lead to some crazy swings!

When you run good at pot limit Omaha, you usually run very good, but the flipside is also true. Remember it when you play!

This article was originally published on March 1, 2016. The last update includes new info, including a list of practical Omaha strategy tips and Vivian Saliba's insights on the most common mistakes beginners make when they play Omaha poker.