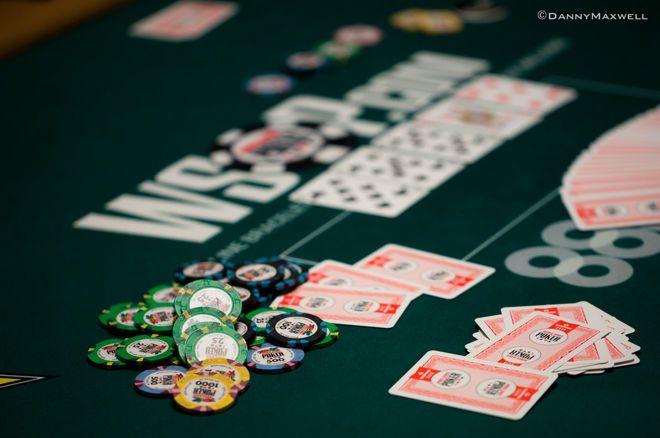 We're returning today to that second table of a $1,500 no-limit hold'em "shootout" event from the World Series of Poker to discuss a multi-way hand in which I end up rivering a full house but don't necessarily feel all that great about getting more chips in the middle.

The hand began with a tight-aggressive player min-raising from early position and the cutoff and button both calling. I was in the big blind with

and a stack of about 40 big blinds to begin the hand. Given such great pot odds, I called as well, and the four of us saw the flop come

I checked with my top pair, and was glad to see it check all of the way around.

The turn paired the board, coming

. As I explain in the video below, this was a terrible card for me. It checked around to the loose, splashy player on the button who bet 5,000 (about one-third pot).

Versus a bigger bet, I'd probably fold. But again the pot odds were hard to resist and I called. The other two players folded, then the river brought the

, giving me a full house (jacks full of kings).

I'll stop there and let you see what happened on the river, and also let you hear the reasoning for why I played it the way I did.

It was an unfortunate spot for me, but I can't feel too badly about losing a small pot (and avoiding losing a bigger one).

Jonathan Little is a professional poker player and author with over $6,800,000 in live tournament earnings. He writes a weekly educational blog and hosts a podcast at JonathanLittlePoker.com. Sign up to learn poker from Jonathan for free at PokerCoaching.com. You can follow him on Twitter @JonathanLittle.