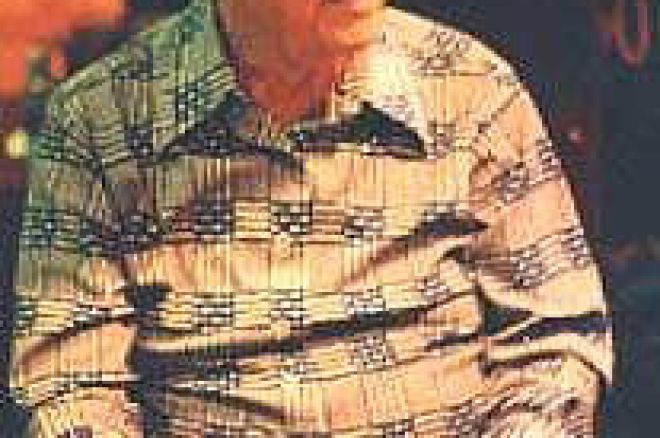 Johnny Moss was born into a family of hard-working people in the town of Marshall, Texas in 1907. Like so many times in his life, he would set-out on the road at a young age, and he and his family moved to Dallas before he could walk.

His mother died of a burst appendix during the trip, and his father was out of work before Johnny entered the third grade. To help with expenses, eight-year old Johnny walked the three-miles from his home into downtown Dallas and began peddling newspapers. During his time on the streets of the growing city, Johnny met Chill Wills, who would become a Hollywood Star, and another lifelong friend, Benny Binion.

By the age of fifteen, Johnny had moved to his own apartment in the city and was working for the Western Union Telegraph Company. He had learned to play dominos (for money), and longed to learn how to win at poker.

The finest poker player in all of Dallas ran a card room called the Otter's Club. Johnny was persistent, and eventually got a chance to talk to the well-liked Mr. Wade, and he agreed to hire Johnny as a look-out for cheaters in the card room. Johnny wanted Mr. Wade to teach him to play poker, and that's just what happened.

After learning to hold his own in the no-limit stud games at the Otter's Club, Johnny moved to the Elk's Club, which offered a ten-handed hold'em game. It was limit, and a tough one to gear-down to for Johnny, but he discussed his play each day with Mr. Wade, and once he was winning at a steady rate, Mr. Wade arranged for the Otter's Club to open its own hold'em game. It would be no-limit.

Johnny took to the aggressive no-limit game of hold'em like it was made for him. A good evening of poker might bring $500 in winnings. Nothing seemed tough to him anymore, until he met Virgie Ann Mouser, and tried to convince her to marry him. Virgie's father was a policeman, and a religious man, who despised the idea of her getting involved with the likes of Johnny.

To win her over, Johnny even took a regular job, and they were married on May 1, 1926. The job Johnny took didn't last long. He was a gambler, and that was that. Even after the Texas Ranges closed the Otter's Club, Johnny simply took to the road to earn a living. When the games dried up, Johnny heard of some good games in the east Texas oilfields. To play, he had to be an employee of Texaco, so, enter Johnny the roughnecker.

The games were so good that Johnny was able to quit in a few months with a solid $4,000 bankroll. He became partners in a bar that offered pool and poker, in Olney, Tx, then moved to Graham, Tx, where his bankroll ballooned to over $100,000.

Johnny learned to play golf in the early 1930's, and learned there were gamblers on the courses too. He worked hard to get his handicap down to about eight, and found that when a big bet was riding on the last hole or two, many player's games fell apart. Johnny's didn't.

With a large bankroll, finding games where the stakes were advantageous was tough. Johnny would hear of a good game and head-off in his car. Sometimes to El Paso, or over to Oklahoma, or into Arkansas, wherever the action games were.

One of those good spots was Shrevesport, Louisiana, and Johnny played against Felton "Corky" McCorquodale in a lineup of some of the best five-card stud players ever found at the same table. The depression was ending in the late 1930's, and money from oil was filling poker tables across the south. Johnny won his share. He had learned early that you needed to watch out for yourself at the poker tables. Johnny never cheated, but he caught enough cheaters to fill a county fairgrounds.

In Lubbock, Tx, Johnny played golf with Titanic Thompson. Thompson was know for his willingness to make large bets, especially when he had a little edge the other player didn't know about. He was one of the original "rounders," always finding an edge.

During a poker game in Reno, Titanic once steered the conversation towards arm-strength, and throwing heavy objects. He told the other players at the game that he could throw a pumpkin over the top of the three-story hotel behind them. After taking several bets, Titanic walked outside with the other players and pulled a miniature pumpkin the size of a baseball from his pocket. It cleared the building with room to spare.

Johnny was intrigued when Titanic told Johnny he wanted to bet him that he couldn't shoot bogey golf at the local club with just his 4-iron. Knowing Titanic had some edge he would throw at him, Johnny had a local blacksmith bend his 4-iron to the shape of a 2-iron, then met him on the golf course.

After missing his putts on the first few holes, Johnny realized that Titanic had paid somebody to raise the greens up right in front of the cup on each green. Johnny countered by sending his caddy home. On the way home, the caddy stomped down the grass in front of the cup on the remaining holes, and Johnny eventually won the bet.

In the 1940's Johnny's reputation for excellence in poker was above anybody's in the country. Even when he was drafted into the Navy, poker and craps games were the place to make money. Johnny was 38 years old when he was discharged, and the local games were good again.

The games were good, but sometimes the other players won. In fact, Johnny hit a bad streak and lost almost $75,000 in just a single week, wiping out his bankroll, plus some money he was playing on credit. For most players, this would have been a disaster, but Johnny had a good reputation, and good friends.

When Johnny asked, Benny Binion just laughed and got him $100,000 to get back on the road with. All around the states of Texas, Oklahoma and Louisiana, Johnny drove, looking for the best games. Back in Las Vegas, Benny Binion was doing well, and a friend of his asked for a favor. The favor came from Nick "The Greek" Dandalos, who was asking for Benny to set him up with the biggest poker game ever.

Binion did just that, and the biggest winner in a game that lasted over five-months was Benny's good friend, Johnny. How much was Johnny able to win? Well, it was well over seven figures.

In the mid 1950's, Johnny began running into players like Doyle Brunson, Amarillo "Slim" Preston, "Puggy" Pearson, "Sailor" Roberts and other young pros just learning their trade. To them, Johnny was a "God", as he was to most who were able to play against him over his long career.

Amarillo Slim first met him in a pool hall in Amarillo in 1950. He had already heard of the legendary Johnny Moss, and knew not to mess with him. As Slim says, "That Moss was a tough sonofabitch." "Some doctor once told him that he'd have heart trouble when he was older, and Johnny said, 'Not me, Doc." ' I don't have no heart.'

Johnny Moss continued to add to his legendary status by finishing second in 1973, then taking the title of champion again in 1974. Before he stopped playing in the 1980's, Johnny placed in WSOP events 27 times.

Not much more can be said about a man who won millions of dollars playing poker, and finished his career by doing so well against the best in the world at the WSOP. Johnny Moss was a true Champion among poker players

Please visit our online poker room directory to see the best bonuses on the web!